Reprogramming the behaviors of a person-sized animatronic dinosaur would have to be among the coolest opportunities to be presented with… This is exactly what [Dr. Lucy Rogers] and a group of fellow techies were tasked to accomplish for the Blackgang Chine park located on the Isle of Wight in the UK. 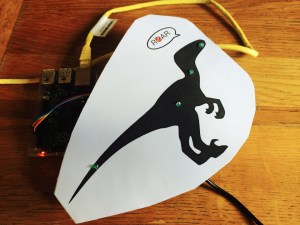 Before the group arrived, the native dinos didn’t do much else than run a preprogrammed routine when triggered by someone’s presence… which needless to say, lacks the appropriate prehistoric dynamism. Seeing that their dated wag, wiggle, and roar response could use a fresh breath of flair, the park’s technical projects coordinator [Mark Butler] began adapting one of the dinosaur’s control boxes to work with a Raspberry Pi. This is when [Lucy] and her group were called upon for a two-day long excursion of play and development. With help and guidance from Raspberry Pi expert, [Neil Ford], the group learned how to use a ‘drag and build’ programing environment called node-RED in order to choreograph new movement sequences for two of the smaller dinosaurs provided for use. The visual nature of node-RED helped those of the Blackgang staff with little programming experience understand the code at work, which aided in their training. Now they can reprogram the dinosaurs with new actions on the fly if needed.

The Pi in the end turned out to be a cost-effective solution which will give the robot dinosaurs a longer, more fulfilling lifespan to roar and frolic on their island home. Check out this video by [Debbie Davies] to see more…

Thanks Ed, for spotting this one!