Throughout the 1950s and early 1960s, the United States Army provided regular status reports to both its interior members and the American public through a half-hour documentary television show called The Big Picture. Since the program was produced by the government, every episode immediately entered the public domain. This particular report tells the story of the T-48 project that culminated in the 90mm M48 Patton tank.

The film opens by providing a brief history of tanks and the lessons learned about them between WWI and the Korean War. The Army sought a more robust vehicle that could handle a wide variety of climates and terrain, and so the process of information gathering began. After a series of meetings at the Pentagon in which all parties involved explored every facet, the project was approved, and a manila folder was officially designated to the project and labeled accordingly. 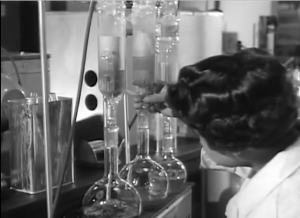 We then tour the R&D facility where new tank materials and components are developed and tested. It is here that the drive gears are put through their paces on a torsion machine. Air cleaners are pitted against each other to decide which can filter out the finest dust and sand. After careful analysis, different tank shell materials are test welded together with various, well-documented electrodes, and these panels are taken outside so their welds can be directly fired upon.

Many of the parts are tensile-tested on a machine that can press or squeeze with 400 thousand pounds of pressure. The turret tester rocks and shakes the unit to ensure the gun won’t fall off as its tank traverses hill and valley. Seemingly, each of the 85k parts that will eventually comprise the production M48 Patton is tested to the gills. Even the leather that will cover the driver’s seat is pitted against equipment designed to age and abrade.

At this point, a project engineer saunters in to the scene to direct the production of scale models. Once approved, a full-size engineering prototype is put together and tested within an inch of its molecules. This includes driving it to a cold testing warehouse where men in suits behind glass expose it to -65°F and verify that it starts without a block heater. 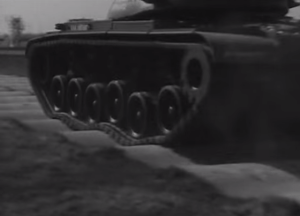 Tank prototypes are performance tested at the Aberdeen Proving Ground. Simulated field conditions include a 60% slope, a wavy road, and a large bathtub. The vehicles must prove themselves on all kinds of hills, swamps, marshes, and bogs. Finally, a few pilot models are made for tactical testing. Once fully approved, mass production can begin. The film estimates that on average,  some three to six years elapse between conception and delivery of a new model of tank.

14 thoughts on “Retrotechtacular: The (Long, Arduous) Birth Of A Tank”