Many think that the next big step in 3D printing is when we’ll be able to print in metal, well, at an affordable rate. But what about printing in metal and plastic at the same time?

The thing is, most electronics are typically two-dimensional. Layers upon layers of relatively flat PCBs make up the brains of every bit of technology we know and love. The funny thing is, we live in a three-dimensional world, and we like to shove these flat circuits into three-dimensional boxes. Well, what if we didn’t have to? What if the circuit could be embedded directly into whatever shape we want? It’d be pretty awesome — minus the whole servicing aspect of the product…

Anyway we’ve seen some great hacks over the years attempting this, like adding a copper wire strand into your 3D print, embedding components into your print by pausing the job, or even going old school and using the point-to-point Manhattan style circuit construction to add some electronic features to your part. But what if your printer could do it for you?

That’s exactly what Optomec is attempting with the Voxel8 3D printing electronics platform. It is your standard run of the mill FDM style 3D printer, but it has a 2nd extruder that is capable of squeezing out liquid silver ink that dries at room temperature. Just take a look at this quadrotor they were able to make.

It’s foreseeable that you could do this with any multi-extruder 3D printer, but current software isn’t really equipped to add in three-dimensional traces to your part… until we heard about Autodesk’s latest foray into the world of 3D printing that is!

It’s called Project Wire and it’s being developed in SPARK, which is Autodesk’s open 3D printing software platform. Yeah you heard us right — it’s actually open. Now is the time to get giddy. Project Wire allows you to easily add three-dimensional traces into your model, not to mention components — oh and multi-material slicing, active pause commands so you can add features mid print… Awesome. 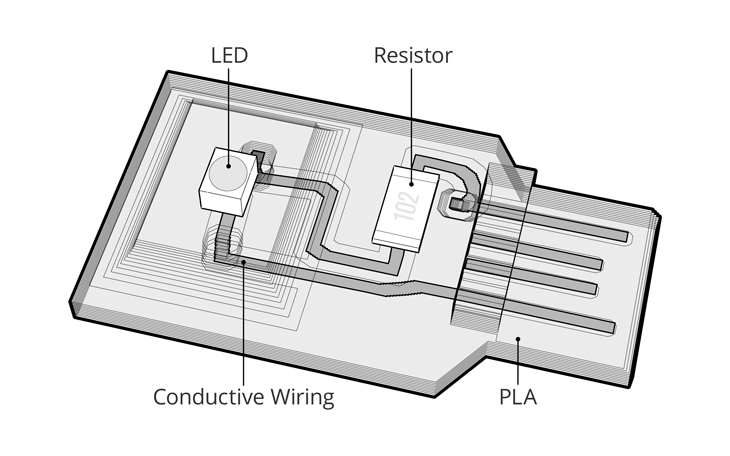 Project Wire is set to release with the Voxel8 sometime later this year. But it’s foreseeable that it could be used with other printers as well, since it is not Autodesk’s goal to be proprietary to a single brand.