Logic Noise is all about using logic circuits to make sounds. Preferably sound that will be enjoyable to hear and useful for making music. This week, we’ll be scratching the surface of one of my favorite chips to use and abuse for, well, nearly anything: the 4051 8-way analog switch. As the name suggests, you can hook up eight inputs and select one from among them to be connected up to the output. (Alternatively, you can send a single input to one of eight destinations, but we won’t be doing that here.)

Why is this cool? Well, imagine that you wanted to make our oscillator play eight notes. If you worked through our first installment, you built an abrasive-sounding but versatile oscillator. I had you tapping manually on eight different resistors or turning a potentiometer to eight different positions. This week, we’ll be letting the 4051 take over some of the controls, leaving us to do the more advanced knob twiddling.

Why is the 4051 awesome? Because this week’s projects are the tip of a large iceberg. There’s nothing stopping you from hooking up eight CD players or radios to the inputs and switching rhythmically between them. Or applying eight arbitrary voltages to each input and stepping through them at audio frequencies, creating an eight-step arbitrary wavetable synthesizer. And the 4051 pairs fantastically well with a microcontroller, if you’re the type who’d like to add computer control to your square-wave noise synths. These applications are above and beyond what we’re doing today, but it’s good to see the forest and the trees.

Up to now, we’ve been changing the resistance in the feedback loop of our relaxation oscillator circuit to control the pitch. But what if we don’t want to have to control the pitch by hand anymore? We can pass off resistor-selection duties to a switch, for instance. So without further ado, I introduce to you the 4051 analog switch. 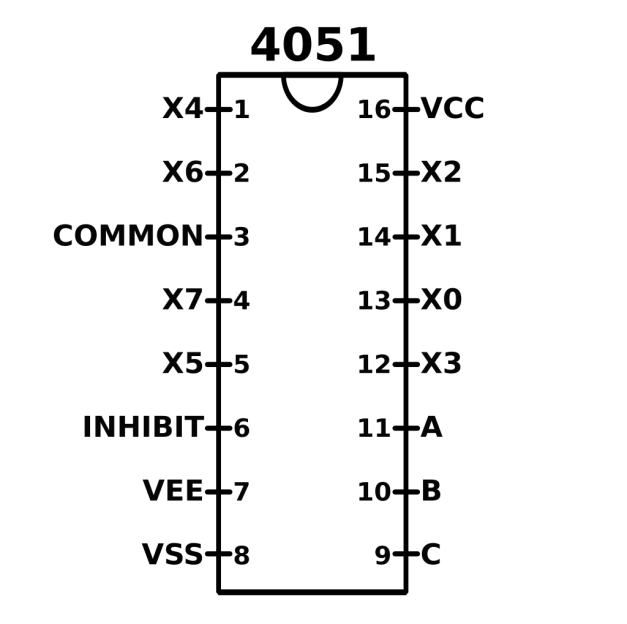 The power supply for this chip is a little bit complicated, because it aims to support both negative and positive (analog) voltages through the switch. In “normal” use, you’d connect VCC to +5V, VSS to -5V, and VEE to 0V, or the signal ground. What’s important here is that the VCC to VSS voltages span the input range, and VEE to VCC is in the relevant range for our logic signals. Since we’re passing single-sided (0V to 5V or 9V) square waves through the feedback path, and using the same voltage range for our logic signalling, we can connect both VSS and VEE to ground.

The circuit here builds on everything we’ve done so far, so dig out the 40106 chip for oscillators, the 4040 binary counter from last week to convert the clock stream into a binary count, and of course, your 4051 analog switch.

For this circuit, we’ll need two oscillators set up on the 40106 like before. We’ll call these two oscillators the “clock” and “pitch” oscillators. The clock oscillator will control the tempo and feed it’s output into the 4040 counter’s input. The pitch oscillator will have a number of options for its feedback resistor, selected by the 4051 chip, and the counter’s output determines which resistor is picked. This means that our circuit looks something like this: 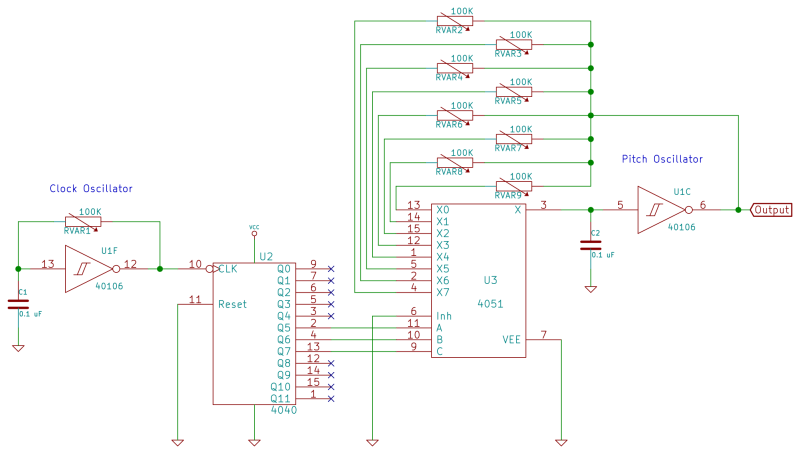 OK, that’s a lot to take in at once, but it breaks down into familiar parts. On the left, we’ve got the circuit from the stacked oscillator example: a variable oscillator driving our binary counter that acts as a clock divider. On the far right, we’ve got a simple relaxation oscillator again, but where the feedback resistor would leave the inverter’s output the circuit splits up into eight individual resistors, passes through the switch, and returns back to the inverter’s output to charge up the capacitor. And there’s the secret. The switch is selecting which of the resistors are used to determine the pitch.

Actually building this circuit as written requires a lot of wiring, and it’s easy to get lost. Instead, I recommend starting off with just one of the feedback resistors and working your way up. With a single resistor in place, the pitch oscillator will only sound for 1/8th of the cycle. Start off by adjusting the timing oscillator fairly slow, and then get a reasonable pitch set up on the audio oscillator. Now you’re ready to add in another resistor into the sequence. And as a practical layout tip, notice that you’re eventually going to hook up five to eight resistors from the switch all into the same point. Make sure that you leave yourself a bit of space on your breadboard to make these connections.

What resistors should you use? If you have an endless supply of 100K potentiometers on hand, that’s ideal. But who among us does? Instead, it’s actually an interesting challenge to just grab a handful of different resistor values between 10K and 100K at random and try to make something musical out of them. In practice, it also makes sense to leave a couple positions on the switch empty. This breaks the feedback loop and gives you musical rests in the sequence.

Once you’ve got three or four resistors hooked up, try picking off other clock divisions as inputs. For instance, if you use a relatively fast clock input for selection bit A, you’ll get a rapid trill between two notes (even and odd values of X) and a slower progression through four of these pairs. There are so many patterns here that you’ve just got to experiment around.
With eight variable resistors to tune the pitches and multiple ways to control the rhythm patterns, this setup really isn’t too shabby. Prepare to spend at least a half hour just playing around after you’ve built it.

Make sure that you explore the whole range of sync-rate modulation frequencies by tweaking the clock oscillator. It’s fairly obvious to run the sync-switching frequency around 2 Hz (120BPM), but really strange things happen as the switching frequency of the sync approaches the audio frequencies. I like this circuit a lot.

There are too many ways to go with this circuit setup.

If you want to play with bizarre rhythms, you can use non-synchronized cycles to drive the A, B, and C pins. Instead of the single-oscillator-plus-counter setup we used here, build three random oscillators on the 40106 and use them as inputs to the 4051. You’ll get some really far-out patterns depending on the relative periods of the various clock oscillators.

Or you could keep the counter in the circuit but feed it an irregular clock source so that the steps it takes are wonky. You can build a strange clock by using diodes to combine the outputs of several oscillators that have different periods. Using Mickey Mouse logic you can AND or OR multiple oscillators together before the counter. Unless you’re very lucky or clever, it may not be “musical” but that’s in the ear of the beholder.

In either of the above two examples, substituting light-dependent resistors (LDRs) for the feedback resistors in the clocks will give you dynamically varying madness as the amount of light in the room changes. This can actually be very cool over the period of a day if you have the attention span for it and run the clocks fast enough that the sound is an evolving texture rather than a manic musicbox.

But you don’t even need the counter to have fun with the 4051. Putting two of them back-to-back (common pin to common pin) gives you an 8×8 switch: one of eight inputs can route to any one of eight outputs. And you can repeat the circuit as many times over as you need simultaneous signal paths. Similarly, two 4051s in parallel with a bipolar power supply make a workable eight-way input selector for your stereo.

In the next installment, we’ll work on some amplifier and filter circuits using CMOS chips. For these, we’ll need a different inverter chip, the 4069UBE, that doesn’t have the built-in hysteresis of the 40106. (Note that the UB part is important — it’s an unbuffered output that we’re looking for.) Until then, have fun and post up your results in the comments.

19 thoughts on “Logic Noise: The Switching Sequencer Has The Beat”