Week 13 of the Caption CERN Contest might be gone, but our intrepid scientist is still rocking his caffeine rush. Thanks for the captions! We’re still trying to figure out if the faces in on the wall are anyone famous – and who exactly are in the cartoon postcards toward the top of the wall. A few readers picked up on what looks to be a compressed air hose in the background. Every office has their coffee station, but we’re betting this particular CERN lab had some seriously frothy milk!

The winner for this week is [Matt] with ‘”this is going to make one gooood coffee rush selfie. All my friends are doing it. We post them on the wall.” – CERN staff really were ahead of their time.’ [Matt] won a sweet Robot Head T-Shirt From The Hackaday Store! 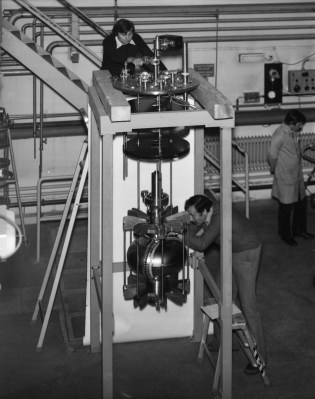 We’ve seen a lot of strange equipment here at Hackaday, but Week 14’s image left us at a loss for words, at least for a few minutes. What the heck is this thing? Pressure vessel? RF chamber? Looking at this image and another one depicting a strange device in CERN’s labs, we haven’t the foggiest idea. We do know it’s large, and these two CERN scientists are working hard to get it ready for… something. It also has fins. Fins make everything cooler. Beyond that – we’re leaving this one in the capable hands of our caption team on Hackaday.io.

We’re sweetening the pot a bit this week. Up until now, our weekly prize has been a T-shirt. While clothing is important, we know that hackers love hacking tools, so this week’s prize will be a Bus Pirate from The Hackaday store. We’ll try to change it up each week with a different device.