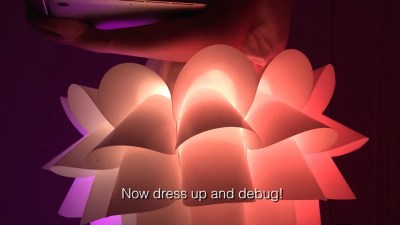 The code is up on GitHub if you’re doing your own accelerometer-to-color-patterns device. Tweak the animations and make them your own, or just leave them as-is and count on your individualistic rump-shaking skills to avoid the eventual embarrassment when someone else steps into the club wearing the same dress as you.

Oh, and we love this image of the builder wearing the dress, lit up, with laptop in her hand tweaking the code. “Dress up and debug” indeed!

Thanks [Michael Philetus Weller] for the tip!