Thank you to everyone who participated in the 2015 Hackaday Prize. Thinking about solving problems, using Open Design ideals to document and share ideas, and learning to work with one another in person or remotely has a profound effect on the world. These are the seeds for the breakthroughs of tomorrow. The next major accomplishment may come from someone who entered the Hackaday Prize, or a budding problem-solver following along in awe. Hackaday is proud to be a part of this movement of hackers, designers, artists, and engineers.

This is the second year of the Hackaday Prize. Coming out of the 2014 Hackaday Prize we knew that people were excited about building with purpose. The 2014 Prize had a spectacular set of 50 finalists, and the Grand Prize winner, SatNOGS, told its own story of social good: making satellite data more widely available. And the SatNOGS project lives on. They formed a non-profit foundation and plowed the prize-winnings back into the project.

This example set by the SatNOGS team inspired us to look to 2015 for more social good. The purpose of the 2015 Hackaday Prize became: Build Something that Matters.

The Hackaday Community has the skills and capacity to improve lives all over the world. Hackers who are doing so should be recognized and rewarded. We tried to think of different grand prizes to be part of that reward; a submarine trip to the Marianas Trench, a trip to Antarctica to participate in a research mission, and a few other ideas were tossed around. But in the end, what’s bigger than a Trip to Space?

Back at Hackaday HQ, we had to figure out how to best spread the word about a contest that aims to change the world. The cool stuff to show off comes from all over the community. So we leaned heavily on the amazing work of everyone who entered the 2014 Hackaday Prize. But still, we needed a centerpiece to launch this year’s contest. We needed a video.

Making the video was an epic Hackaday journey. We met at the beginning of February for a couple of days to hammer out the Prize details. Spontaneously this turned into renting cameras, building a moisture vaporator prop, and spending one fun, sweaty day of filming. Take that, Hollywood!

Since the Hackaday Prize is as much about working together as winning prizes, the Hackaday Crew ran events all over the world during the competition. From hardware show-and-tells to workshops and hackathons, we had a fantastic time meeting the Hackaday Community in person. We called these events Hackaday Prize Worldwide and they took place in Chicago, Mumbai, Toronto, New York, Bangalore, Los Angeles, Shenzhen, New Delhi, Boston, Washington DC, Zurich, Berlin, and San Francisco.

In every event we tried to include lightning talks where people working on their Hackaday Prize entries could present their projects. Speaking publicly about your creations can cause you to think about them from your audience’s perspective, which can highlight those “unknown unknowns”. Rather than being one-way presentations, the attendees were often full of hacking knowledge. People who’d faced similar issues helped out and partnerships were formed. Sharing ideas brings hackers together.

The Hackaday Prize Worldwide tour, not to mention the $500,000 prize package, were made possible by the support of Supplyframe, who presented the 2015 Hackaday Prize, and the generous involvement of our sponsors: Atmel, Freescale, Microchip, Mouser, and Texas Instruments. Thank you for sharing our vision of making the world a better place through engineering and Open Design. 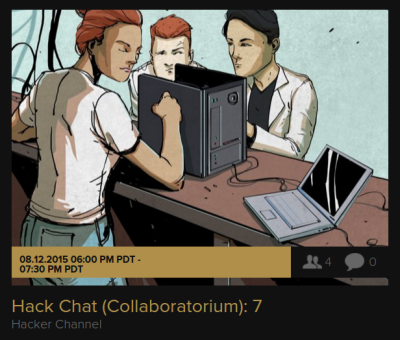 The world tour was amazing, but not everyone was geographically near enough to an event to attend, so we formed the Hackaday Prize Channel. This live messaging system on Hackaday.io was mostly used for casual hangouts. But once a week we organized opportunities for people to present their projects in an online lightning talk.

We had as much fun as anyone during these online events — called the Collaboratorium. Looking back at it, many of the finalists were involved in those sessions. [Antti Lukats], creator of the DIPSY (Best Product Finalist), even co-hosted a session with Hackaday’s [Al Williams] specifically on programmable logic. The channel still exists, now called HackChat which which can be found on the Hacker Channel, and is a great place to hang out for a casual conversation or to ask some serious questions.

The 2015 Hackaday Prize was successful beyond measure. Just looking at the top two prize winners, Eyedrivomatic adds the freedom of mobility back to the lives of quadriplegics and Vinduino which helps make measuring crop irrigation simple and affordable, and enabls farmers to better conserve water. The potential reach of these two projects alone is astonishing, but they are among hundreds of worthy endeavors. If you want a hack that will benefit the world, we’ve got hundreds that you can borrow and build upon. If you’re inspired, the Hackaday Prize was a success.

The Hackaday Prize will ride again in 2016. It’s a bit too early to begin planning, but we’re always interested in hearing ideas. What do you think the challenge should be next year? Where do you want to see the Hackaday Prize go? Let us know in the comments below.