This post contains spoilers for Star Wars: The Force Awakens. These spoilers won’t affect you if you haven’t seen the movie; they’re equivalent to saying, “in A New Hope there’s a moon sized battle station with a superlaser” and “someone gets a hand amputated with a lightsaber in a Star Wars movie”

A lot has happened in the Star Wars universe since the battle of Endor. The Empire is in ruins, and Yavin 5 and the forest moon of Endor both have new planetary ring systems. The Rebellion has given way to a new Galactic Republic, but there is a spectre of evil looming in the unknown areas of the galaxy: the First Order, a malevolent force that has built a planet-sized superweapon capable of destroying entire planetary systems from across the galaxy. The Starkiller gets its energy from harvesting entire suns, moving from one solar system to another to feed this massive weapon of terror.

We’ve had nearly forty years to argue the plausibility of the Death Star, lightsabers, parsecs as a unit of time, and hyperdrives. It’s time to pass the hallowed tradition of arguing over fictional spacecraft to a new generation. Starkiller Base is a cool idea, but does the science behind it hold up? No. It’s completely implausible. It makes for a great story, but it’s completely implausible.

Aren’t you a little short for a stormtrooper installation?

1200km is actually fairly small for a planet, but is it too small? If we’re to define a planet the same was the International Astronomical Union (IAU) does, we have only a few things to consider. According to the IAU, a celestial body is a planet if it orbits the sun (an invalid qualification, this is in a galaxy far, far away), if the celestial body has cleared its orbit of debris (like a star, for example), and if the planetary body has reached hydrostatic equilibrium; basically, if it’s a sphere or not.

If we were to compare Starkiller Base to objects in our solar system, we would find a few similar objects. Starkiller Base is a bit larger than Ceres, the largest object in the asteroid belt. Ceres is large enough to pull itself into a sphere, so we can only imagine whatever planet the First Order hollowed out would have as well. 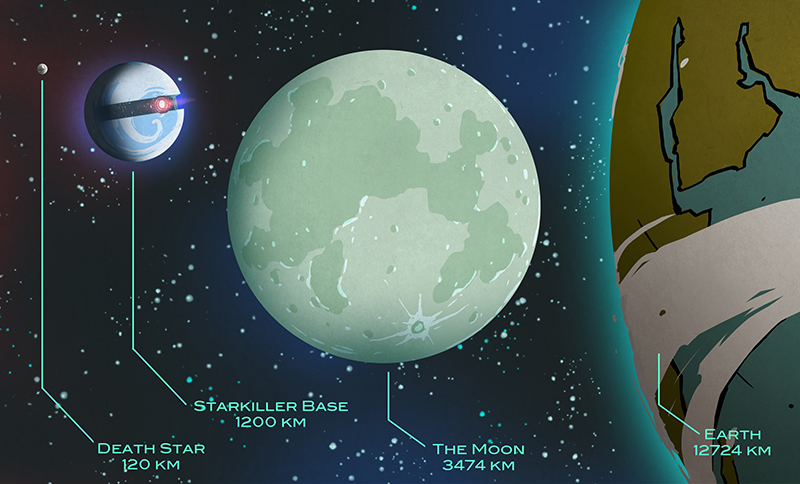 The Starkiller is a planet after all, and with that comes everything that comes with planetary-sized bodies. This means geology, hydrology, possibly tectonic movement, and yes, an atmosphere. While most of the surface of the planet of Starkiller Base was left alone for the construction of a star destroying superweapon, the Starkiller Base does have one very unique feature: a huge gash along the planet’s equator larger than any possible natural geological phenomenon.

If we assume the planet that would become Starkiller Base was reasonably Earth like, with similar gravity, atmosphere, but only 1/10th the diameter, we can gain some insight into what the inside of this base is actually like. Given an atmospheric pressure of 1 atm at ‘sea level’ (or whatever altitude the Starkiller surface scenes take place at), and assuming the weapon canyon’s depth is approximately one fifth of the radius of the planet (a good guess), we can calculate the atmospheric pressure a the bottom of the weapons canyon.

Doing the math for a weapons trench that is about 240km deep, a temperature of 0°C, and Earth-like atmospheric pressure and gravity on the Starkiller’s surface, we find the pressure at the bottom of the weapons trench is an astonishing: thousands of atmospheres of pressure. It’s a product of the exponential nature of the barometric formula, and save for force fields and gravity plating, there’s no way around it.

To put this in perspective, the pressure at the bottom of the Pacific ocean – Challenger Deep in the Marianas trench – is about 1,000 atmospheres. The First Order stormtroopers wouldn’t really be breathing the air this far towards the planet’s core, they would be swimming in the air.

At these temperatures and pressures, water turns to a phase of ice not normally seen on Earth – phase VII ice. Air turns to liquid, too: these pressures are above the liquid-vapor transition line of nitrogen and oxygen. Even if the First Order was able to keep the atmosphere at a balmy 0°C at the bottom of the Starkiller’s weapons trench, the interior of this planet-sized megaweapon would still be uninhabitable.

The Starkiller and E=mc²

The Starkiller does exactly what it says on the tin: it sucks up stars to run a single, huge, system-destroying megaweapon. Everything in the universe and extended universe is conserved, and we’re left with the question, where does the star actually go?

If the star used to power the Starkiller is converted directly into energy via mass-energy equivalence or E=mc², we can get a good idea of the power output of this weapon. Additionally, we can calculate what would happen if the process of converting mass to energy isn’t exactly 100% efficient.

Again, we’re left to make a few assumptions about how the Starkiller actually works, but we do know from The Force Awakens that the Starkiller travels from star to star, consuming it entirely, and turning that energy into a focused energy beam that destroys entire planets. The size of a main sequence star can be approximated by its color, with stars larger than our sun being bluer, and smaller stars having a reddish tint. From what The Force Awakens, we can make an educated guess that the star in the final act was smaller than our sun, perhaps a K-type star of around 0.15 solar masses.

Directly converting that mass into energy yields an astonishing number: about 1.5 x 1031 Joules of energy. This is more than enough energy to wipe several planets off of a galactic map. This is nearly equivalent to all the energy released by our sun over the course of one thousand years. It’s a mind-boggling amount of energy, but if you need to blow up planets from across the galaxy, it’ll do the trick.

The relationship between an amount of energy and a rise in temperature is given in every physics and chemistry textbook as Q = cpmΔT, where Q is the amount of energy, cp is the specific heat of the atmosphere, m is the mass of the atmosphere, and ΔT is the change in temperature. We can assume a value of 1.0 kJ/kg for the specific heat of the Starkiller’s atmosphere, and an atmosphere with a mass that is about 1/10 that of Earth’s (5×1018 kilograms), we come up with a shocking number. The waste heat from the Starkiller’s stellar mass to energy conversion is enough to raise the temperature of the atmosphere of the First Order’s megaweapon to nearly 300 million degrees. This is the problem with turning matter into energy: you get a lot of energy. If the mass to energy conversion process of the Starkiller is just the tiniest bit inefficient, it’s enough to vaporize everything on the surface.

Is the megaweapon in A Force Awakens plausible? No, but that’s really not the point. It’s just a movie, after all – and a great one at that – with starships maneuvering in space just like they would in an atmosphere, beams of light that magically stop in mid-air, and an energy field that surrounds and penetrates living beings and binds the galaxy together. These things aren’t real, and putting real numbers behind them misses the point entirely. It is, after all, just a movie, but putting the numbers behind a great story can be just as fun.

112 thoughts on “The Scientific Implausibility Of Starkiller Base”