Imagine trying to make a ball-shaped robot that rolls in any direction but with a head that stays on. When I saw the BB-8 droid doing just that in the first Star Wars: The Force Awakens trailer, it was an interesting engineering challenge that I couldn’t resist. All the details for how I made it would fill a book, so here are the highlights: the problems I ran into, how I solved them and what I learned.

END_OF_DOCUMENT_TOKEN_TO_BE_REPLACED 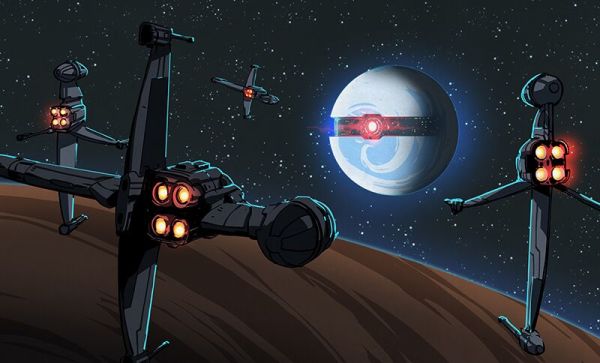 This post contains spoilers for Star Wars: The Force Awakens. These spoilers won’t affect you if you haven’t seen the movie; they’re equivalent to saying, “in A New Hope there’s a moon sized battle station with a superlaser” and “someone gets a hand amputated with a lightsaber in a Star Wars movie”

A lot has happened in the Star Wars universe since the battle of Endor. The Empire is in ruins, and Yavin 5 and the forest moon of Endor both have new planetary ring systems. The Rebellion has given way to a new Galactic Republic, but there is a spectre of evil looming in the unknown areas of the galaxy: the First Order, a malevolent force that has built a planet-sized superweapon capable of destroying entire planetary systems from across the galaxy. The Starkiller gets its energy from harvesting entire suns, moving from one solar system to another to feed this massive weapon of terror.

We’ve had nearly forty years to argue the plausibility of the Death Star, lightsabers, parsecs as a unit of time, and hyperdrives. It’s time to pass the hallowed tradition of arguing over fictional spacecraft to a new generation. Starkiller Base is a cool idea, but does the science behind it hold up? No. It’s completely implausible. It makes for a great story, but it’s completely implausible.