“Hi! I’m Rud, Kilo Five Romeo Uniform Delta.” That’s me introducing myself at a ham meeting. Ham radio operators kid that we don’t have last names, we have call signs.

Becoming an Amateur Radio Operator (ARO), our more formal name, is not difficult and opens a world of interesting activities, including hacking. As with anything new, becoming actively involved with an existing club can be daunting. The other hams at a meeting are catching up with their buddies and often seem uninterested in the new guy standing nearby. Some groups will invite new members to stand and introduce themselves early in the meeting, which helps break the ice.

Regardless of how anyone else acts at the meeting there is one ham who is always looking for someone new – the ham who manages public service events, where amateur radio operators help establish communications for large public gatherings. These can be local bike rides, walks, or runs; I’ve even seen hams working an art show. In the nomenclature adopted since 9/11, these are “planned incidents” in contrast to “unplanned incidents” like hurricanes, tornadoes, forest fires, snow storms, and other natural or man made disasters. Working planned incidents is training for unplanned incidents when that need arises. The basic activities for AROs are the same.

Here in the Houston there are two very big events that enlist hundreds of hams. The big one in January is the Houston Marathon. The other large event is the Houston to Austin Multiple Sclerosis 150 (MS 150) mile bike ride in April. That event starts on Saturday morning, takes a break mid-way on Saturday evening, and finally wraps up late on Sunday evening. Starting in the fall there are warm-up events for the Marathon and in the late winter bike rides to prepare riders for the MS-150. There are also other marathons, Iron Man races, walks, runs, and races throughout the year. Wherever your are, there are probably events nearby and they can always make use of your radio capability.

Public service events are a great opportunity for new hams with Technician class licenses. This class typically uses frequencies in the 2m VHF and 70 cm UHF bands because the radios are the easiest to obtain and learn to use. While Technicians do have access to the 6m and 10m bands, with limited continuous wave (CW or Morse code) privileges in the lower bands, getting started on them requires the assistance of an Elmer – a long standing term for a ham who helps others get started.

VHF and UHF frequencies are line-of-sight, except under extreme atmospheric conditions, so repeaters are used to expand coverage. Public service events generally use repeaters to cover the area of the event. They are also used during emergency operations. Or some small events may just use simplex — direct radio-to-radio connections — which is good training for unplanned incidents if the repeaters are not operating.

A typical race or ride is many miles in length. Along the route there will be rest stops or break points where the participants get drinks and food – literally on the run for a marathon or Iron Man event. Each break point needs a ham in case of problems with the setup of the area or participant mishaps. If a participant is having a medical problem emergency services provided by the event organization needs to be notified.

The amateur-developed Automatic Packet Reporting System (APRS) is frequently used to track vehicles as they travel along the course. Since ARPS uses either 2 meter or 70 cm frequencies a Technician can operate an APRS station. You can even get smart phone apps that use the phone’s GPS to provide APRS tracking over the cell phone network. You still need to be an amateur radio operator to use these apps since the APRS message may eventually be sent via a packet radio digital repeater, called a digipeater. Creating an APRS or a packet radio station is a good hacking opportunity providing experience with micros, digital signal processing, and radio frequency design. AROs are the only individuals in the US who can build radio transmitters and use them without obtaining certification by the Federal Communication Commission.

In an event like the MS-150, there are hams riding in first aid vehicles, ambulances, SAG wagons (a term of unknown origin that some suggest means Special Assistance Group but others feel it just indicates they pick up ‘sagging’ participants), and supply trucks. If the weather turns nasty, buses may be enlisted to transport the large numbers of participants who cannot continue. Most of the vehicles have a ham riding with them so they can be directed to a point of need and to report the severity of problems when appropriate.

At public service events, a new ham learns the discipline of working on a directed net. With dozens of hams all using the same frequency it would be chaos if they all talked at once. In a directed net one operator serves as net control and coordinates communication. A typical exchange might be:

Net Control this is Breakpoint Three.

This is Net. Go ahead Breakpoint Three.

Net, we have three riders who need to be SAGed to the next breakpoint.

Breakpoint Three, SAG 4 just left Breakpoint Two for your location. It’ll be awhile before it gets there but it’s on the way.

Understood, Net. This is K5RUD, clear.

For larger events, like the Marathon or MS-150, there are nets on different frequencies, each with a specific purpose. For instance, an event might have a medical net and with its own net control operation separate from the logistics net for breakpoints.

WARNING – heavy acronym territory ahead; another challenge for newcomers breaking into ham radio.

I mentioned earlier these events are referred to as “planned incidents” using nomenclature adopted since 9/11. This brings all incidents under the National Incident Management System (NIMS). A number of problems occurred during the response to the tragedy in New York City that led to the development of NIMS. You may have noticed there was no use of code words in the exchange I illustrated above. Previously, the Q code, QSL – “can you acknowledge receipt?” – might have been used. The problem that occurred at 9/11 was first responders – police and other emergency personnel – were using codes that had differing meanings which led to great confusion. Under NIMS, all communications is supposed to be in plain English.

NIMS also introduces the Incident Command System (ICS) which originated in California with fighting forest fires. A prime focus of ICS is identifying who is in charge and the chain of command. There is one Incident Commander with subordinates in charge of specific aspects of managing the incident. By following NIMS and ICS everyone responding to an incident, especially an unplanned incident, knows where they fit in the operation. The same is true today of hams who are now included in many local incident plans. Public service events can, and should be, organized along the lines of ICS. Local first responders may even require formal documentation following NIMS before giving approval for an event. 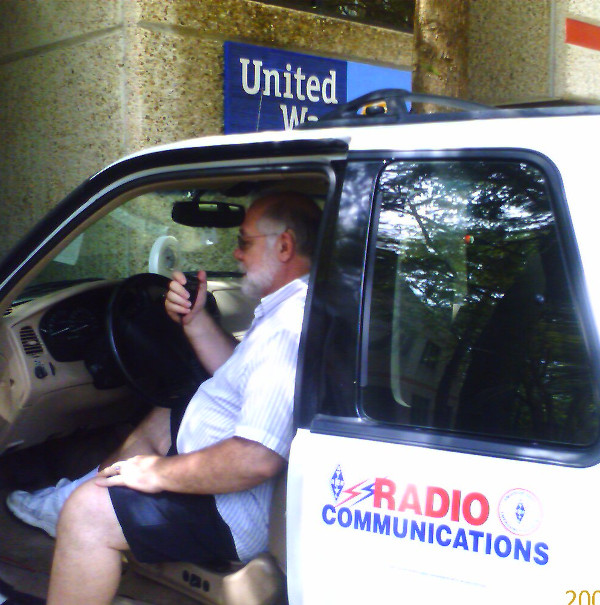 The formal ARO group for unplanned events is the American Amateur Radio Relay League (ARRL) Amateur Radio Emergency Service (ARES). An ARES groups is typically organized by county and interacts with local authorities to respond when needed. As a participant in ARES in 2008 after Hurricane Ike, I worked with our county United Way to check on the distribution of supplies through the Food Bank.

Hams throughout the county, even those not affiliated with ARES, provided information on supplies — like the location of open gas stations. Other members of ARES were in the county emergency operations center. One of the training events for the county ARES, in conjunction with a local club, is an Iron Man event whose bike ride portion passes through part of a National Forest where cell phone coverage is minimal.

I got started with the MS-150 race in Houston back in 1997. That introduced me to a large number of hams who still know one another today even though I have moved some 40 miles away. We still meet at public service or other events. For instance, I ran into the ham who organized the 1997 MS-150 at the recent Houston Mini-Maker Faire. We chatted for awhile and then moved on knowing we’d see each other at another activity, possibly years from now. Public service events are great for using our radios, helping others, and meeting a terrific group of hams.