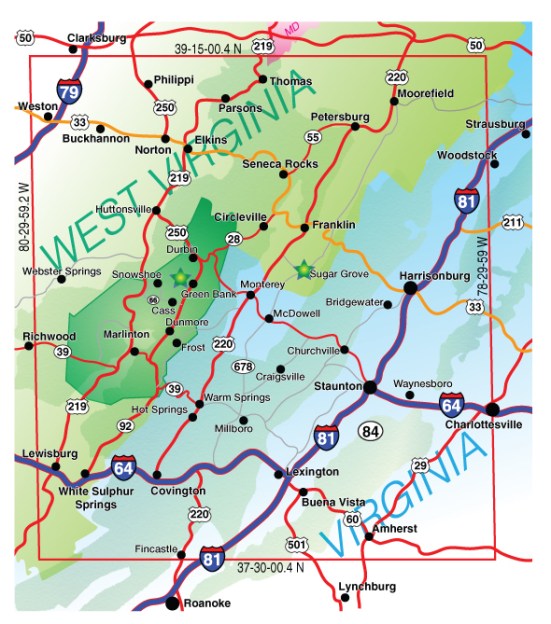 Like so many aspects of our contemporary technological life, the NRQZ can trace its roots all the way back to the Cold War era. When the Soviet Union launched Sputnik and started the Space Race, the US was far behind and knew it. Playing catch-up involved building all the infrastructure needed to support a space-faring culture, and radio astronomy was a big part of those early efforts. Finding a convenient place to build that infrastructure that was not subject to a lot of interference was an imperative.

Established in 1958 by the FCC, the NRQZ is a rough rectangle of land about 110 miles by 120 miles, straddling the border between Virginia and West Virginia and just barely touching the western tip of Maryland. Nestled in the Allegheny Mountains, the area was selected for a national radio astronomy program first for its proximity to Washington, but also for the possibility of using terrain shielding to protect the yet-to-be-built antennas from stray RF interference. The area was also sufficiently rural and difficult to reach that it was expected to not suddenly share in the post-war boom in development; even in the 1950s, the suburbs could be noisy RF environments.

The National Radio Astronomy Observatory (NRAO) Green Bank site, located in the western third of the Zone, has been the home of a number of telescopes over the years. The original main dish served from 1962 until it collapsed in 1988. The current dish, officially the Robert C. Byrd Green Bank Telescope, was built in 2000.

The list of superlatives of this piece of technology is almost as massive as the thing itself, which is currently the world’s largest fully-steerable radio telescope and consequently the largest moving land-based object in the world. Its 2-acre main reflector has over 2000 panels that are individually repositionable with an accuracy of 0.003 inches, which helps it adjust for the distortions introduced by gravity. Abbreviated “GBT”, it’s no wonder they just call it the “Great Big Thing.”

But an ultra-sensitive set of ears is no good with a high noise floor, so the NRQZ sets strict limits on emissions in the frequencies that are important to radio astronomy. That mainly means the microwave frequencies, and since the GBT’s active surface allows it to work efficiently up to 116 GHz, there’s a huge chunk of spectrum that’s off limits. And it just so happens to correspond to the wavelengths that are most important to our current wireless world. The Zone is administered by the FCC, so the rules mainly concern licensed transmitters, and license applications are strictly reviewed with preference given to public safety systems.

But it’s the huge increase in unlicensed transmitters in the Zone that cause the astronomers the most grief. Bluetooth, WiFi, wireless landline phones, alarm systems, and even microwave ovens – the GBT cafeteria microwave is in a Faraday cage, by the way – can ruin a telescope observation session. Even broadband RFI from spurious sources can wreak havoc, including a ratty old electric blanket that was arcing, or the RF from the ignition systems of gasoline engines.

The latter is mitigated by limiting vehicles within a mile of the antenna to diesel engines without ECUs. Tracking down and correcting the former is a job for the NRAO’s Interference Protection Group. Armed with spectrum analyzers and directional antennas, the team searches for point sources of RFI and works with the telescope’s neighbors to remediate the problem. For the dodgy electric blanket, which was used to comfort an elderly couple’s old dog, the solution was as simple and humane as buying them a new blanket. Things get a little harder when the source is telemetry tags for flying squirrels being studied by the Fish and Wildlife Service, but somehow the IPG manages to keep the Zone quiet enough to do important science.

Spooks in the Zone?

But is science the only thing going on in the Zone? Not by a long shot. The eastern third of the Zone is home to Sugar Grove, West Virginia, the decidedly landlocked former home of Naval Information Operations Command Sugar Grove. Decommissioned in 2015, NIOC Sugar Grove started life in the Zone as another radio telescope installation, with what was to be a 600-foot parabolic dish to gather signals intelligence by capturing stray Soviet radio signals bouncing off the moon. Construction was halted in 1962, and through the lobbying efforts of Senator Byrd, and because of the good listening conditions in the Zone, Sugar Grove became a naval listening station.

The mission of Sugar Grove was unclear. The Navy maintained that the two AN/FRD-10 circularly disposed array antennas (CDAA) were used primarily for research and maritime search and rescue efforts. But the “Fred-10” arrays were gigantic circular antennas with a 3200 nautical mile range that could be electronically steered and were used in other Navy installations around the world to monitor and triangulate on high-frequency transmissions from Soviet submarines. Whatever the real reason behind its construction, Sugar Grove’s Fred-10 arrays were rendered obsolete by the end of the Cold War.

The Navy wasn’t the only outfit whose spooks took advantage of the radio silence in the Zone. Sugar Grove was, and perhaps still is, home to one of the National Security Agency’s ECHELON listening posts. Named by Edward Snowden in his leaked NSA documents as a site code-named “Timberline”, Sugar Grove was part of a network that intercepted signals to and from communications satellites in orbit above the Atlantic. As more and more communications has shifted to lower-latency undersea cables over the years, snooping on communications satellites has become less profitable to the spooks, so chances are that Timberline is no longer active. But the NRQZ is a priceless asset for electronic intelligence, and it’s doubtful that it’ll go to waste.

Staying in the Zone

Sadly, the “Great Big Thing” is falling on hard times. Despite the outstanding location, the superior technology, and the ability to keep 13,000 square miles in near-radio silence, the NRAO’s $10 million yearly budget is under scrutiny and could be defunded at any time. Here’s hoping that the observatory can partner with universities so it doesn’t fall like Sugar Grove, and that the Quiet Zone stays quiet and enables great science for a good long time to come.

42 thoughts on “All Quiet On The West Virginia Border: The National Radio Quiet Zone”