It seems every week we report on Kickstarter campaigns that fail in extraordinary fashion. And yet there are templates for their failure; stories that are told and retold. These stereotypical faceplants can be avoided. And they are of course not limited to Kickstarter, but apply to all Crowd Funding platforms. Let me list the many failure modes of crowdfunding a product. Learn from these tropes and maybe we can break out of this cycle of despair.

Failure Out of the Gate 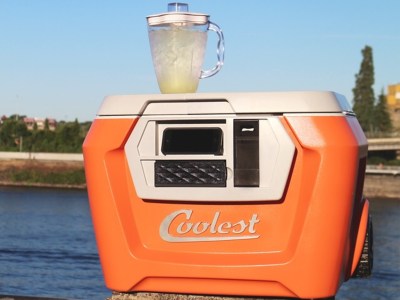 You don’t hear about these failures, and that’s the point. These are crowd funded projects that launch into the abyss and don’t get any wings through printed word or exposure. They may have a stellar product, an impressive engineering team, and a 100% likelihood of being able to deliver, but the project doesn’t get noticed and it dies. Coolest Cooler, the project that raised $13 million, failed miserably the first time they ran a campaign. It was the second attempt that got traction.

The solution is to have a mailing list of interested people are ready to purchase the moment you launch, and share to everyone they know. Reach out to blogs and news organizations a month early with a press package and a pitch catered to their specific audience. Press releases get tossed. Have a good reason why this thing is relevant to their audience. Offer an exclusive to a big news site that is your target market.

Failure to Raise the Goal 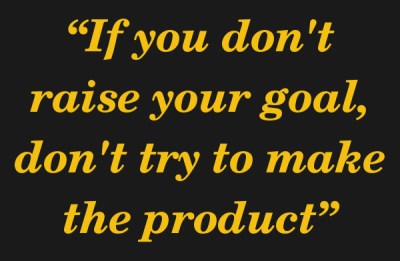 Ok, you’ve launched, gotten a few blog mentions, got a few shares on Facebook, and you’re shy of your goal. Shoot. Now you need to do some analysis. Why did you fail? People will have told you if you listened. Maybe the prices were too high. Maybe the product just wasn’t as appealing as you thought. Maybe you just didn’t get enough eyeballs but for the eyeballs you did get, the interest was there.

Remember you picked your goal for a reason. It’s the minimum you can get away with to make the project successful. If you don’t raise your goal, don’t try to make the product anyway, because you already know you won’t have enough money or customers to make it work.

Many crowdfunding campaigns are run by people who have never built a product before. This is dangerous because they often take the cost of materials for their prototype and assume they’ll be able to get the cost down in high volumes. This is very wrong. Check out the Dragon Innovation Standard BOM for a much more detailed tool to help estimate actual costs of manufacturing.

This is frequently underestimated. The wrong way is to take the cost of the prototype components, figure out their 1k volume costs, add a few cents for a box and enclosure, and make that your goal. Yes, components cost less in high volume, but a product that’s manufactured in large quantities frequently has extra parts that the prototype doesn’t, more safety and robustness features, and expensive parts (like cable assemblies) that were ignored in the prototype. Another thing that gets ignored is the cost of failed components. You will pay for failed products somehow. Whether it’s an injection molded part with extremely tight tolerances that leads to lots of parts being thrown away because they don’t meet the tolerance, or crappy electronic components that were cheaper but fail more often. The worst case is completely assembled products that make it to the customer but weren’t tested first and just don’t work. These will need to be replaced at your expense.

This is related to the Cost of Goods, but is more about human costs and engineering one time parts like assembly jigs. Setting up an assembly line isn’t cheap or easy, and every step in the assembly process take time, which translates to money. That’s why it’s important to design assembly jigs to make the process go faster and more consistently. Every step should be simple and fast, because you will need to hire the cheapest labor possible to make it happen, and you need that cheap labor to get it right every time or else they become expensive quickly. Some think that going to China right away is the best step. Remember that not only will you pay to travel and live there, probably for months longer than you expect, but you’ll also be paying people who don’t understand your product or your language to assemble something they will never use, and there are no repercussions if they do it wrong. Cheaper on paper, but more expensive when the hidden costs are considered.

Cost of Design for Manufacture

The previous two steps are why this step is so important. Designing the test and assembly jigs, refining the product so the parts can be sourced (with backup suppliers), so that assembly is efficient, and so that the product is robust and common failure modes are eliminated. These things take time and expertise from people who do this for a living and aren’t cheap. In high volumes this is critical because a 10% failure rate in the tens of thousands of units means dealing with thousands of unhappy and very vocal customers.

Cost of Certifications, Shipping, and Duties/Customs/Taxes

Once the product is designed, there are lots of regulations in lots of countries for how the product can be imported and how it must work in order to be legal. If it has a circuit board, chances are it will need FCC approval in the US and CE in Europe. This testing can vary from a few thousand to tens of thousands. UL testing is another big (though not required) expense for devices that plug in. Shipping by air from China can wipe out all margins, but shipping by boat takes a month, so that delay must be considered. Import duties often come in between 3%-10%, so that eats a chunk of margin. Then there’s tax. Kickstarter funds are probably treated as income, and for a lot of projects sales tax may need to be collected. Don’t forget Kickstarter’s cut, too, or the cost of making and shipping all the shirts and stickers you promised (this effort doesn’t contribute much to your goal or minimum orders).

Everybody wants a slice of the cake, and in most cases you can’t avoid giving them their slice. It’s essential to plan for it or else you end up with nothing left for you.

You used the cheapest components possible, you have sloppy tolerances, your assembly team is unskilled and inconsistent, and while the product is getting made, it really sucks. The recipients get unhappy because it breaks when they breathe on it wrong. Now at the end of the campaign, having delivered the product, you have nothing but a bunch of bad reviews, a bad reputation, and a bad product that you won’t be able to convince people to buy because they can see all the other people who regretted it. This is the story of Zano, a tiny drone that pretty much never got off the ground.

You expected to sell a few hundred units, which you could probably make in your kitchen over the course of a few weeks and deliver on schedule, but you instead have to make and deliver tens of thousands of units. Now the expectations on quality are way higher, and there’s no possible way to spend the next year at your kitchen table slowly trickling out units. This means spending money on assembly jigs, design for manufacture, and all the other things you hadn’t planned for when you were tiny. Look to the Pebble Watch for an example of extreme success that caused problems. Granted, they didn’t go out of business, but they were delayed for a long time because of the issues they had scaling production to the size they needed.

This happens all the time. The founders put out a wild and crazy idea that doesn’t work, it gets a lot of traction because it’s cool, raises a boatload of money, and then the founders post some vague updates for a few months before going dark. Or maybe the public discovers their fraud and halts the campaign or gets Kickstarter to shut it down. This is one of the reasons Kickstarter instituted a policy requiring working demos for products, but it still gets abused, and with a higher level of sophistication that fools more people.

The trick to not getting outed is to not be a fraud. People should never wonder for a minute if your product (and the concepts behind it) is legitimate. Extraordinary claims require extraordinary proof, so if your project defies thermodynamics, you need to have a lot of convincing evidence and corroboration from experts.

Lately there was the Triton, the underwater breather, and another one was RITOT a projector watch.

You raised your goal, you made your product, you shipped it, customers are happy, and now… what? Some companies don’t plan for what happens after their Kickstarter, and sadly end up out of business because of it.

Selling your product on Kickstarter means selling it at an enormous discount, so your margins are already thin. That leaves very little money left after the campaign is done, so you can’t purchase more stock. Then you’ve got the marketing dip; you won’t get as much publicity ever as you did with your campaign launch, so you have to work ten times as hard to get a fraction of the publicity and can’t expect sales levels to maintain their Kickstarter rates.

Many companies go after Angel or VC money, but sometimes their Kickstarter success can be a problem because mediocre success gives the investor an idea of the actual size of the market, and that number is usually way smaller than they want. With no stock, no money, and less publicity, the business has nowhere to go, and despite the years of effort to design, build, and deliver, it still gets trapped and dies.

Many Kickstarters have made it work. They leveraged their assets, powered through their problems with only minor delays or cost problems, they grew to be sustainable after crowdfunding, and they are continuing on. Going through it is certainly not the rosy picture that is painted, it’s not right for everyone, and it’s not a guarantee of success by any means. But it is an option that has opened up possibilities for thousands of small businesses who would otherwise not even get to the point of being able to mass produce something. It’s because of crowdfunding that all these companies were able to push the rock a little further up the hill and get a little closer to true success.

Author’s note: While Kickstarter is used extensively throughout this article, not all of these projects were on the Kickstarter platform. Some of them, like the Ritot and Triton, were on Indiegogo.

68 thoughts on “Why Kickstarter Products Fail”