END_OF_DOCUMENT_TOKEN_TO_BE_REPLACED

The typical sensors used for position control are a GPS receiver and an Inertial Measurement Unit (IMU) made up of an accelerometer, a gyroscope, and possibly a magnetometer (compass). Altitude control would require a barometer or some other means of measuring height above ground. Using sensor fusion techniques to combine the raw data, a computer can determine the position, movement, and altitude of the multicopter. But calculating corrections that will be just right, without over or undershooting the goal, is where PID comes into play. END_OF_DOCUMENT_TOKEN_TO_BE_REPLACED

END_OF_DOCUMENT_TOKEN_TO_BE_REPLACED

Imagine you’re a farmer trying to grow a crop under drought conditions. Up-to-the-minute data on soil moisture can help you to decide where and when to irrigate, which directly affects your crop yield and your bottom line. More sensors would mean more data and a better spatial picture of conditions, but the cost of wired soil sensors would be crippling. Wireless sensors that tap into GSM or some sort of mesh network would be better, but each sensor would still need power, and maintenance costs would quickly mount. But what if you could deploy a vast number of cheap RFID-linked sensors in your fields? And what if an autonomous vehicle could be tasked with the job of polling the sensors and reporting the data? That’s one scenario imagined in a recent scholarly paper about a mobile Internet of Things (PDF link).

In the paper, authors [Jennifer Wang], [Erik Schluntz], [Brian Otis], and [Travis Deyle] put a commercially available quadcopter and RC car to the hack. Both platforms were fitted with telemetry radios, GPS, and an off-the-shelf RFID tag reader and antenna. For their sensor array, they selected passive UHF RFID tags coupled to a number of different sensors, including a resistance sensor used to measure soil moisture. A ground-control system was developed that allowed both the quad and the car to maneuver to waypoints under GPS guidance to poll sensors and report back.

Beyond agriculture, the possibilities for an IoT based on cheap sensors and autonomous vehicles to poll them are limitless. The authors rightly point out the challenges of building out a commercial system based on these principles, but by starting with COTS components and striving to keep installed costs to a minimum, we think they’ve done a great proof of concept here. 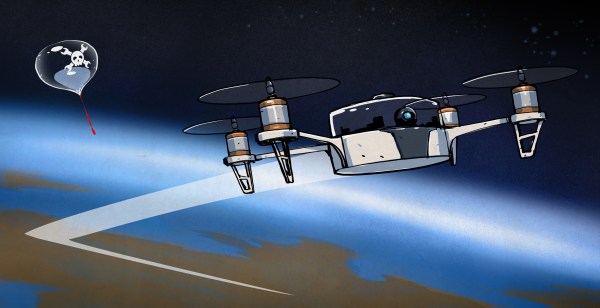 Your mission, should you choose to accept it, is to send a quadcopter to near space and return it safely to the Earth. Getting it there is not that difficult. In fact, you can get pretty much anything you want to near space with a high altitude weather balloon. Getting it back on the ground in one piece is a whole other ballgame.

Why does someone need to do this? Well, it appears the ESA’s StarTiger team is taking a card out of NASA’s book and wants to use a Sky Crane to soft land a rover on Mars. But instead of using rockets to hold the crane steady in the Martian sky, they want to use…you guessed it, a quadcopter. They’re calling it the Dropter. 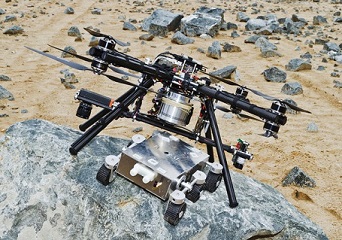 At first glance, there seems to be a lot wrong with this approach. The atmosphere on Mars is about 100 times less dense than the Earth’s atmosphere at sea level. How do props operate in these conditions? Testing would need to be done of course, and the Earth’s upper atmosphere is the perfect place to carry out such testing. At 100,000 feet, the density of the stratosphere is about the same as that of the Martian surface atmosphere. AND 100,000 feet is prime high altitude balloon territory.  Not to mention the gravity on Mars is about 38% of Earth’s gravity, meaning a 5.5 pound model on Earth could accurately represent a 15 pound model on Mars.

With all of these facts taken into consideration, one can conclude that realistic testing of a scale model Martian quadcopter is within the grasp of the hacker community. We’ve seen some work on high altitude drones before, but never a quadcopter.

Now it’s your turn to do something no one has ever done before. Think you got what it takes to pull such a project off? Let us know what your approach to the challenge would be in the comments.