Flaschen Taschen was inspired by the Mate Lite bottle-display built by C-Base. That original display used Club Mate bottles — an energy drink popular with hackers in Europe that has a cult status at a level making us wonder why it’s not yet available in wider markets. So when Noisebridge went to build their own they had to find a different donor drink for the 1,575 clear glass bottles. 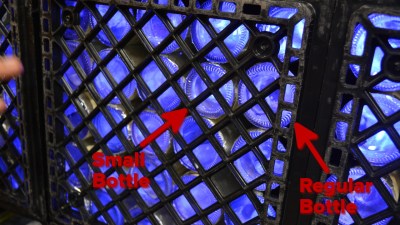 They settled on Corona beer. But one of the challenges to this selection is that Mate comes in plastic crates and Corona doesn’t. Instead, they borrowed Dean Foods milk crates from a local market. They were just a bit too small to fit a 5×5 grid so a brilliant choice was to substitute some of the full-sized 12oz bottles for 6.4oz Coronita bottles. The difference is negligible to your eye and has the added benefit of making the bottles fit snuggly in the crates for marvelous pixel density.

WS2801 LEDs in strings were used to illuminate the display. Each crate of 25 bottles has its own string which chains to the crate next to it. This makes it reasonably manageable to move the display and get it set up again. One Raspberry Pi controls everything and achieves a refresh rate of around 160 fps.

Rear of the display shows LED strips and foil

One Raspberry Pi to rule them all

Light leakage on dot displays is a big concern and that was addressed in several ways for this project. Each bottle is lovingly wrapped in foil (they used pre-cut food service sheets like your burritos are wrapped in) to isolate each pixel. Hardboard with a grid cut in it secures the necks of the bottles. The business side of this spacer is painted black which prevents light leaking from behind the display and helps with a true ‘off’ state for the pixels.

No display is an island. You can build it but you need visualizations to make the crowd oooh and ahhh. Noisebridge delivered on that as well. They were scrolling through numerous animations like plasma and particles, scrolling text, and of course playing games. Flaschen Taschen includes an implementation of pong which was being played by Fairegoers. Between the big blinkie and this classic game it’s no wonder we could barely get in the frame for the interview.