They overcame numerous obstacles in the design of the glove, many of them non-obvious. For example, if you’d like something to retract an extended finger, a spring would likely be your first choice. However, coil springs only care about displacement along their axis, they offer considerably less resistive force if bent. So, elastic bands proved a better solution. Do you glue the 3D printed parts to the glove, or do you sew them? Why do the pressure pads with the longer leads keep failing? These and many more were all questions that had to be answered by the team.

The brains of the device is a custom motor controller shield sitting on an Arduino. While the Arduino has its fault, it remains as always, the champion of accessibility. The actuators are small geared brushed motors. What appears to be a worm gear is actually a spool for a metal cable. When the user presses on the pads in the fingers, the motors turns and pulls the cable down, contracting the finger. To extend, the motor reverses and lets cable back out and the finger returns to its resting state via the elastic bands on the back of the hand.

The team is hoping to get the glove to a state where another project; perhaps one like e-Nable, can get the hands into the lives of the people who need them.  If you’d like to contribute or check on their progress, their site is here. 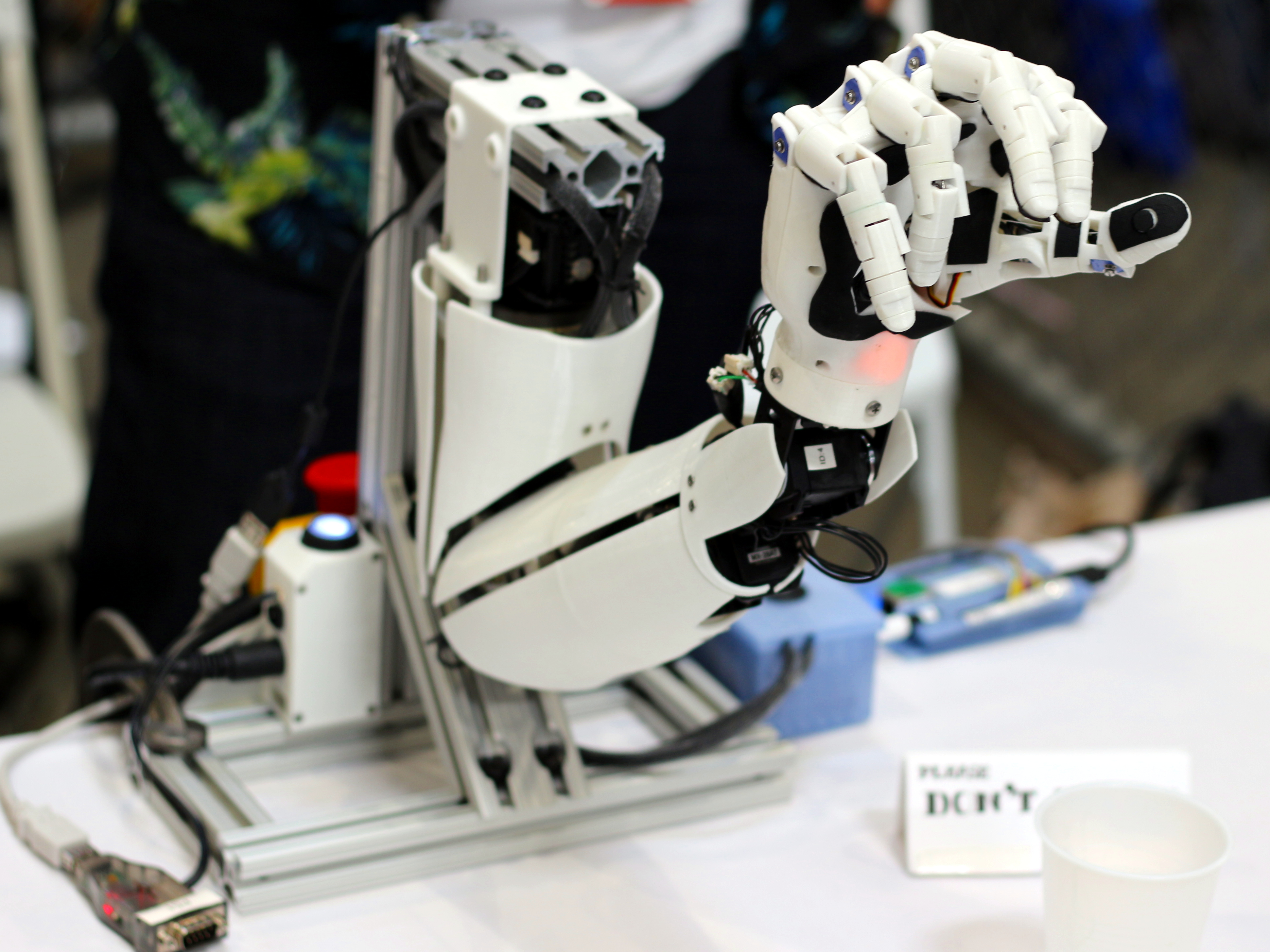 Closer to the Automail side of things, is the other project we got to see at Maker Faire, the Bento-Arm. The Bento arm is a research project grown out of BLINC Lab at the University of Alberta. Unlike the MAG, the Bento Arm is still a long way from holding a can of soda; proudly attached to someone’s shoulder. Its purpose is to lower the barrier to those wishing to experiment with advanced myoelectric prostheses.  The Bento Arm includes 5 degrees of freedom (shoulder rotation, elbow flexion, wrist rotation, wrist flexion, hand open/close). It’s also anatomically correct.

Even if you could have a perfectly functioning arm today: one that could flawlessly detect electric signals and translate it into super smooth, super strong movement, It would at best be mildly useful, and at worse manage to be more a hazard to its user than a boon.

Luckily, we live in a world with self-driving cars and five dollar single chip computers. It’s not such a stretch to say that we have all the components for a perfect prosthesis lying around; all it needs is a little bit of robotic glue to hold it all together. Of course, that will take tons of research at the edge of machine learning, human machine interaction, and all the related fields.

The Bento Arm is not a cheap arm, but considering that a low-end myoelectric arm can cost over 50,000 US Dollars… well, it’s a cheap arm. The actuators are off-the-shelf Dynamixel brand servos. These high-end servos come stock with position control, sensors for velocity and load,  as well as a grab bag of useful modes. Want them to act as a shock absorber? They can do that.

The frame for the arm is 3D printed. It’s all been designed so that it can still go together even with the tolerances that a normal RepRap style printer can meet.  The control software has been written for both ROS (Robot Operating System) and MatLab; If you’ve ever spent any time around Mechanical Engineering professors, you know they get nervous without MatLab.

Certainly as cool as the Arm is their Handi Hand, slated for open source release later this year. It attaches to the Bento Arm; after which the whole assembly starts to look pretty futuristic. The Handi hand has motion in all five fingers, positional feedback, and even a camera in its palm. Which makes you wonder about the monster in Pan’s Labrynth.

Since it’s just servos all the way down, the hand can be controlled with any microcontroller that outputs a PWM signal in the 0-5V range. Their current library is written for the Arduino Mega, but this can be easily ported.

In the end the project all comes together to make an impressive machine learning platform. For the price of a top of the line quad-copter and a few late nights, any hacker or university can be working on the next generation robotic arm. That’s pretty cool. If you’d like to get in touch with the project, the link is here.  If you’d like to build a Bento Arm, they’ve already released the entire design on GitHub; It even has an assembly manual!

In the end it comes down to this. The continued work of scientists, doctors, and engineers around the world along with advances in home rapid prototyping have brought the field of prosthetics not just into the hands of Hackers, but into the lives of regular people through them. It’s clearly showing itself to be a field where anyone can get active in it and start helping right away. Whether you’re just signing up on e-Nable to start printing the parts for hand during the hours your printer would otherwise sit idle, or if you’re building on the work done by people like Blinc and MAG to get closer to building hands as nice as the ones the Skywalker family likes to get after fights, this is an exciting time to be a Hacker.

4 thoughts on “The Hacker Is The Future Of The Prosthetic: Hackers Helping Those In Need”