We are going to great lengths to turn a quick idea into an electronic prototype, be it PCB milling, home etching or manufacturing services that ship PCBs around the world. Unwilling to accept the complications of PCB fabrication, computer science student [Varun Perumal Chadalavada] came up with an express solution for PCB prototyping: Printem – a Polaroid-like film for instant-PCBs. 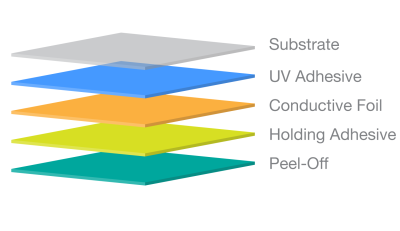 Printem is a photosensitive multi-layer assembly, similar to presensitized copper clad – but with an instant development feature. It consists of a thin conductive copper foil that is held to a transparent carrier substrate by a photocurable adhesive film. The other side of the copper features a layer of holding adhesive and a peel-off back side.

To turn the Printem film into a PCB, a negative of the copper traces is printed onto the transparent substrate with help of a regular inkjet or laser printer (a). The film is then exposed to UV light (b). Where light shines through the printed mask, the photo-adhesive cures and selectively fuses the copper film to the substrate. After exposure, the back-side with the holding adhesive is peeled off (c), taking the un-fused copper-portion with it.

The copper layer is very thin, about 100 times thinner than on regular PCBs, and breaks clean enough around the contours of the exposed regions to form copper traces. The result is a flexible PCB (d) that, depending on the substrate material (acetate or polyimide), can even be soldered at low temperatures. For those who want to learn more about how Printem works, [Varun] has put together an interesting writeup on Hackaday.io.

Printem is a project at the DGP (Dynamic Graphics Project) lab of the University Of Toronto and has been recognized by the University as one of the Inventions of the Year. As co-founder of Printem, Ph.D. Student and busy inventor [Varun] now works on the commercialization of his instant PCBs with support of the University’s accelerator network. Enjoy the explanatory video below and let us know what you think of this in the comments!

73 thoughts on “Hackaday Prize Entry: Printem Is Polaroid For PCBs”