Most hobbyists don’t have waterjets in their garage, but they would if they could! A Waterjet (or Water Jet Cutter) is a marvelous tool. Simply mount a high-pressure stream of grit and water on an x-y gantry, and the pressure generates enough erosion to cut through just about any thin material. Unfortunately, claiming your own waterjet will erode away a nice big hole in your pocketbook too. Machines up to this point start at about $75K, not to mention that they’d claim the better part of your workspace in a two-car garage.

Most of us everyday hackers that want to play with the benefits of this tool send their parts out to a professional shop. Consequently, we don’t often hear about everyday hackers using waterjets, or waterjet-cut parts all that often, with one exception. Back in 2014, a crew of students from UPENN built a functional waterjet with a parts-list that could make it affordable for about $5000. Now that same team is back. This time, they’ve spun together not just a one-off, but a fully-featured product called Wazer, which just launched its Kickstarter campaign minutes ago and has already nearly quadrupled the $100k goal. How could it do that? The full package starts at modest $3599-$4499. This is crowd-funding, after all, but a 20x undercutting of price is a powerful motivator.

This past week, I caught up with the crew at Wazer to get a live demo, so I thought I’d give a quick rundown of my thoughts. First, let’s get some of the up-front technical details:

Right off the bat, it’s worth mentioning that Wazer is limited in size, thickness, and cutting speed, when compared to a conventional waterjet. It’s not, however, limited in its broad spectrum of materials. That said, we’re not expecting that the folks looking to pick up one of these for their garages will see this tool as a drop-in replacement for the $100K model. Instead, it’s a new way to get in touch with cutting a variety of thin, flat materials with tolerances good enough to build functional prototypes that respect the machine limits.

As we might expect, the Wazer won’t just start cutting parts out of the box before some mild setup. First, the Wazer requires one water main’s inlet source and one water outlet source. In case you were thinking about mounting this beast right next to the livingroom printer, well forget it, unless, of course, your house is plumbed accordingly. Apart from that, the waterjet is actually both small enough and sufficiently self-contained to be able to run indoors… that is: if you’re willing to brandish some sandy parts around your house before they get cleaned up. All-in-all, this tool is aimed for landing in either the garage or workshop, and both the water requirements and wet parts that it produces will probably keep it there. 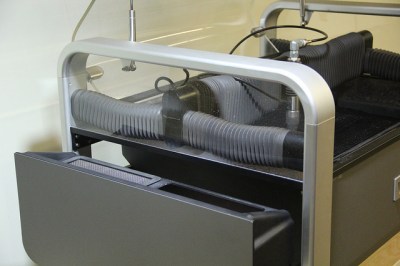 Overall, the device is nicely self-contained. The abrasive garnet is an off-the-shelf commodity that gets loaded from the side drawer. The water stream and the abrasive garnet are both mixed at the nozzle, and the enclosure keeps the mess inside the machine. Finally, the high pressure system is provided by a small external box that tucks under the machine in their promotional video.

Besides your water bill, there are two other consumables that need to be kept in mind. The first is the garnet, which needs to be tossed after use; the second is the polyethylene bed that will eventually wear out from repeated cuts.

Going from design to cuts draws many parallels to a laser cutter interface. Simply import a vector graphic and position the cutting location over an x-y grid “laser-cutter style” to select the cut location. There’s an additional option to choose which side of the line (or dead-center) to trace along. 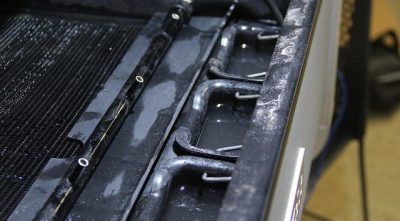 The garnet gets filtered out into discrete “catch containers” at the front (an effort to avoid clogged drains). Keeping the quantity of used garnet in check is just a matter of pulling out the containers, which drain their water when removed, and tossing the sand out. Wazer actually solves the maintenance problem quite nicely. Where one trained professional might be scooping out the sand from the machine for several minutes on a conventional Waterjet, this system lets the user make a couple quick trips to the trash with a few cartons of sand. 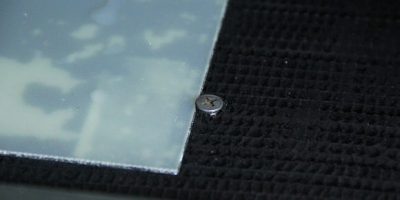 Fixturing the workpiece is also fairly straightforward. The Wazer crew has had some pretty solid success by simply screwing directly into the corrugated polyethylene for support. Forces on the part are (1) fairly mild compared to a milling machine and (2) mostly downwards, so the parts don’t need a fancy rigging system to hold them in place. A few screws like the one shown to the right are all that’s needed for keeping a plate from squirming around whilst cutting.

It’s easy to forget that most of the folks building tools for the after-hours engineer aren’t actually cold-hearted salespeople. They’re engineers too–and they’re no exception from the crew of folks who love a good side project. Over at the Hax Accelerator office, I got a preview of some of the side-projects they’ve built using the very tool they’re offering us now.

Compared to a laser cutter, the waterjet is far less limited in what materials it can accommodate. The knife stock above was cut from D2 tool steel and then finished by a professional knife maker. In the middle, the quadcopter frames are cut from FR4 and carbon fiber (Upcycled PCB-copter, we’re going to will you into existence right here!).

Given that the effective tool diameter is only about 1.5 mils (0.0015 inches), the level of detail achievable easily exceeds the finesse of any craftsperson working by hand. The other advantage is the consistent repeatability of parts produced with this tool. It’s not too difficult to imagine tiling an entire wall with the same pattern cut on the same machine.

Getting a Grip on the New Possibilities

With the arrival of any new machine in the shop, it’s easy to start drooling over the possibilities. How could this new beast add to the vocabulary of techniques of cutting and squirting that we already know so well? First, off, it’s worth mentioning that there’s no free lunch here. Cutting parts on this machine is slow when compared to a professional machine that can cut far thicker materials. That said, if you’re buying one of these, odds are good that the cutting speed isn’t a limiting factor in being able to have parts on hand immediately. Taking a look at their accuracy, the Wazer also can’t do the same precision work of a respectable CNC mill. Nevertheless–in most cases, it doesn’t need to! For the everyday crafty folk who’s not worried about their press fits and slip fits, 0.003 mils is plenty.

For the serious machinist, 0.003 mils isn’t great, but that’s no dealbreaker. Folks in the machining and fabrication industry often cast the rough shape of some complex parts and then finish off the actual dimensions that matter on a milling machine. Likewise, for the parts that need tighter tolerances, the Wazer can become the “first pass” machine, taking rough cuts out of many thin materials–even some that would otherwise intimidate the everyday hobby machinist like FR4 or tool steel. For the dimensions that matter, folks can drop their parts onto another machine to finish off the important dimensions. Perhaps the hole dimensions need to get widened to their final size with the right reamer, or perhaps the surface finishes of some edges needs to get polished off with a finishing end mill. All-in-all, the Wazer should have no problem making the big cuts in otherwise hard-to-cut materials.

Typically, serious hobbyists who want to waterjet their parts will send their designs out to professional waterjet houses. Unfortunately, if time’s against us, both the shipping and the lineup of other folks’ projects can strike a delay. If there’s a mistake in that design, or if we find that Rev-1.0 has some design issues once we start assembling it at home, we’re delayed by the one avoidable issue: parts just take time to come back.

Wazer isn’t a tool for the impatient. It’s a new way to refine our understanding of how to work with waterjet parts. Post design, it’s a mere half hour or so before we’re back at the desk assembling parts. Sure, mistakes cost us materials, but no mechanism for learning quite surpasses the combined benefit of both speed-in-iteration and immediate feedback.

Moreover, a nearby waterjet can transform parts that were doomed to the trash to land back into your shelf of raw materials. If you’ve been building quadcopters with G10 or carbon fiber, why not take that scrappy motherboard out of the e-waste pile and cut your next frame out from there? Remember all those fiberglass sheets that you quickly realized you couldn’t machine without a respirator? Get them out of the trash immediately. Finally, take a look around you at the trash that gets tossed out or sold at the local thrift shop. That cookie sheet? Yup. Glass window panes? Absolutely. Ceramic plates? Why not? Welcome to a whole new world of upcycling.

From a crew that land on these pages with their proof-of-concept just a few years ago, we’re thrilled that a one-off has begun to mature into a Kickstarted commercial product that can enable thousands of eager students, homebrew machinists, and crafters alike. Keep in mind that no first rev of any Kickstarter machine is without its kinks, and a $4K waterjet will never be able to accomplish the same job as it’s $100K older sibling. Nevertheless, we’re excited for the community to get a taste of fabrication outside of the land of 3D printers, and we eagerly await their response.

75 thoughts on “Wazer: The Waterjet For Your Garage”