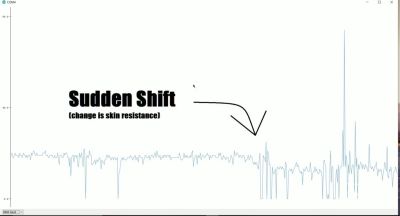 Of interest is how he used the latest version of the Arduino IDE to visualize the data graphically (see right). This is easier than interpreting a bunch of numbers scrolling by on the serial terminal or having to import the data into a spreadsheet. You can find the graph under the Tools menu listed as Serial Plotter.

You don’t need a lot of external parts for this project, although the finger clips and the cardboard box will take a little mechanical skill to complete.

We’ve looked at galvanic skin response and other biosignal processing before. You can do a lot more if you build a little more hardware.