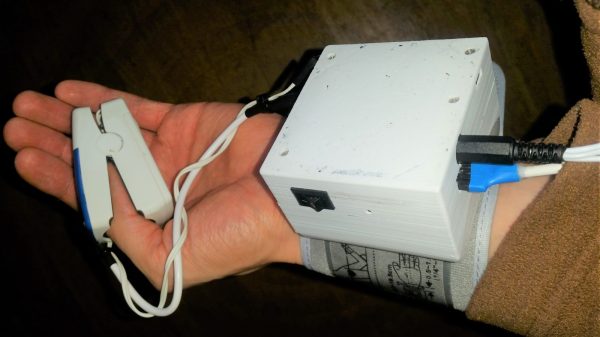 Is it [Dr. McCoy]’s long-awaited sickbay biobed, with wireless sensing and display of vital signs? Not quite, but this wearable patient monitor comes pretty close. And from the look of it, [Arthur]’s system might even monitor a few more parameters than [Bones]’ bleeping bed from the original series.

Starting with an automatic blood pressure cuff that [Arthur] had previously reversed engineered, he started adding sensors. Pulse, ECG, respiration rate, galvanic skin response, and body temperature are all measured from one compact, wrist-wearable device. It’s not entirely wireless – the fingertip pulse oximetry dongle and chest electrodes still need to be wired back to the central unit – but the sensors all talk to a Teensy 3.2 which then communicates to an Android app over Bluetooth, so there’s no need to be tethered to the display. And speaking of electrodes, we’re intrigued by the ADS1292 chip [Arthur] uses, which not only senses the heart’s electrical signals but also detects respirations by the change in impedance as the chest wall expands and contracts. Of course there’s also pneumography via radar that could be rolled into this sensor suite.

It’s all pretty cool, and we can easily see a modified version of this app displayed on a large tablet or monitor being both an accurate prop reconstruction and a useful medical device.

END_OF_DOCUMENT_TOKEN_TO_BE_REPLACED 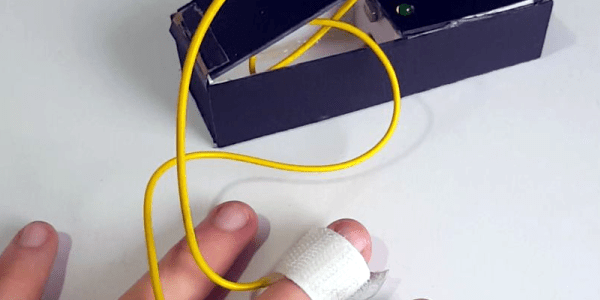 END_OF_DOCUMENT_TOKEN_TO_BE_REPLACED

Electrodermal activity, or galvanic skin response has a lot of practical applications. Everything from research into emotional states to significantly more off-the-wall applications like the E-meter use electrodermal activity. For his Hackaday Prize entry, [qquuiinn] is building a wearable biofeedback wristband that measures galvanic skin response that is perfect for treating anxiety or stress disorders by serving as a simple and convenient wearable device.

Detecting electrodermal activity has been within the capability of anyone with an ohmmeter for over a hundred years. [quin²] is doing something a little more complex than the most primitive modern means of measuring galvanic skin response and using a dual op-amp to sense the tiny changes in skin resistance. This data is fed into an ATMega328 which sends it out to a tiny LED display in the shape of an ‘x’.

Reading electrodermal activity is easy, but doing it reliably in a wearable device is not. There are issues with the skin contacts to work though, issues with the amplifier, and putting the whole thing in a convenient package. [qquuiinn] asked the community about these problems in group discussion on the hacker channel and got a lot of really good advice. That’s a great example of what a project on hackaday.io can do, and a great project for the Hackaday Prize. This arm cuff is a sensor package which logs data whenever you’re wearing it. It records accelerometer data, skin temperature, and galvanic skin response. That data can then be analyzed to arrive at figures like calories burned. But… The company behind the device seems to have included a way to keep the cash flowing. Once you buy it you can read the data off of the device using a Java program they supply. But you can’t erase the data from the device unless you subscribe to their online service. Once it fills up, it’s useless. [Doug] wasn’t happy with this gotcha, so he reverse engineered the technique used to clear the BodyBugg’s memory.

There had been a few previous attempts at reverse engineering the device but that groundwork didn’t really help [Doug] on his quest. He ended up disassembling the Java classes from the original program. This helped him figure out how to initialize communications. Once there he was happy to find that the device will tell you how to use it. If you issue an invalid command it will respond with a list of all valid commands. Everything you need to get up and running can be found in his github repo.

Ah, Christmas. That wonderful time of year when you can roll out of bed to the screams and wails of children, grab a hot cocoa, and spend several hours arguing with an 8-year-old about which LEGO set to build first. Simply magical. While you’re waiting for the Doctor Who Christmas special to come on, settle down with these wonderful Christmas-themed builds that came in over the last few weeks.

One step closer to Robot Santa

Here’s an interesting way to spice up your seasonal headwear. [Mark] took a Santa hat and added a string of multicolored LEDs to the brim. The lights were picked up at a drug store for a dollar. Control is through a simple push button connected to an ATtiny13. Press the button, the lights cycle in a different pattern. Very cool, so check out the video.

[Auger] posted this very cool light up Christmas tree decoration on Instructables. This tree is made up of three pieces of acrylic. Different designs were laser cut into each piece of plastic – candy canes for the ‘red’ piece, stars and tinsel for the ‘yellow’ piece, and the tree for the ‘green’ piece. LEDs of the respective colors are cemented to the bottom of each bit of plastic. It’s called light piping and is used everywhere. This is the first time we’ve seen three colors, though.

This is what nerds do, and it’s awesome

[Rickard Dahlstrand] was playing around with his phone trying to take deliberately fuzzy pictures of his tree. He noticed the dashes produced from the LED Christmas lights must be produced from PCM dimming. Going through the EXIF data in the picture, he found the exposure time was 1/17th of a second. 1/17 of a second = ~ 58 ms / 5 (cycles on the picture) = ~11 ms per cycle = ~100 Hz frequency on the PCM dimming. Of course this is just about 2 times the line frequency in [Rickard]’s native Sweden, so we’ll call this confirmed. There’s no blog post for this, but we’ve never seen a clearer example of applied geekery. Simply awesome.

Yeah, we measured [Rickard] on a nerd meter

In the spirit of giving, [Johannes] decided to tell the entire world exactly how nerdy he is. He built a ‘Nerd Alert’ meter out of an old 1950s Japanese multimeter. The old guts of the meter were chucked, and a simple amp made out of a transistor amplifies the current flowing through the user’s fingers. A neat scale ([Johannes] measures somewhere between Amiga Workbench and Space invaders) replaces the old, boring, number-based one. Again, no write-up, but here’s some awesome build pictures.

Finally a use for all those old radio tubes

[AUTUIN] took apart a vacuum tube with a blow torch and a diamond cutting wheel. Surprisingly, he was able to put it back together, but not before making a wonderful Christmas ornament. There are two copper wires inside the envelope that are the leads to a single orange-red LED. The whole thing is powered by a watch battery. We’ll be sure to reference [AUTUIN] next time we have to take apart a glass bulb, because he managed not to burn, cut or blind himself.

Six things in a links post? It’s a Christmas miracle!

[Darryl] sent in a nice tool to select and display all of the hacker/maker merit badges available from Adafruit. Oh, we’re still trying to figure out who to give 10 badges to. We’re giving away skull ‘n wrench badges to the top ten hacks ever featured here. Leave a note in the comments, or tell us who should win.

Now put the computer down and go spend some time with your families, or failing that, strangers. Of course there’s an all day Doctor Who marathon, and that thing isn’t going to watch itself…