Neon lights are that kind of nostalgic item that everybody seems to love. The neon lamp is a type of gas discharge lamp, they generate light when an electrical discharge travels through an ionized gas, or plasma. When the voltage between the electrodes exceeds certain threshold, the gas ionizes and begins conducting electricity. The basic process that generates light is the return of the ions to the ground energy state, with the emission of a photon of light. The light color depends on the emission spectra of the atoms in the gas, and also  on the gas pressure, among other variables.  Gas discharge lamps can be classified by the pressure of the gas:

Another classification comes from the heating method of the cathode:

High intensity lamps are another type of gas discharge lamp where a high power arc is formed between tungsten electrodes. Power levels of several kilowatts can be easily produced this type of lamp. Of course we can’t forget to mention nixie tubes, which are a type of cold cathode neon lamp, popular for building retro clocks. Fortunately, they are now in production again.

The history of the gas discharge lamp starts in 1675, when Jean-Félix Picard, a French astronomer, observed that the empty space of his mercury barometer emitted a faint glow as the mercury jiggled. Later, it was showed that the glow came from static electricity in the partial vacuum in the mercury tube. In the 19th century, with the advent of electrical generators, several scientists started to experiment with gas tubes and electricity, resulting in the invention of the Geissler tube, by the German physicist and glassblower Heinrich Geissler in 1857. These were the first gas discharge tubes and were mass-produced mainly for entertainment purposes.

The neon tube, as we know it, was developed by a French engineer,  Georges Claude in 1910, and first demonstrated in the Paris Motor show of that year. In the US, the first neon signs were acquired by a Packard car dealer in Los Angeles, for $1250 apiece. Since the tubes can be produced in almost any shape, they are visible even in daylight, and a large number of colors can be created by different combinations of gases and coatings in the tube, neon signs quickly became very popular. By 1940, there were around 2000 shops producing neon signs in the US.

But neon lamps are not only decorative items. A small version is used today mainly as indicator light in electronic instruments and appliances, but it was important in the history of electronics. The neon bulb has negative resistance: before reaching the breakdown voltage, the lamp conducts almost no current. When the breakdown, or turn-on voltage is reached, the lamp’s resistance suddenly drops and a large current is established. In this condition, the voltage drops with increasing current. Therefore the turn-off voltage is lower than the turn-on voltage. This property is called hysteresis.

Because of this property, neon bulbs were used in relaxation oscillators, that can reach maximum frequencies of around 20 kHz. The neon lamp in the circuit does not conduct until the voltage of the capacitor reaches the turn-on value. Then the lamp starts to conduct and the capacitor quickly discharges until its voltage is the turn-off voltage of the lamp. The neon lamp stops conducting and the process repeats.

Computing can also be done with neon lamps! In the circuit shown at the left, taken from the GE low lamp manual, we can see a simple memory circuit. According to the manual, it works in the following way: the supply voltage V is between the turn-on and turn-off voltages of the lamp, so that in the quiescent condition the lamp is not conducting. 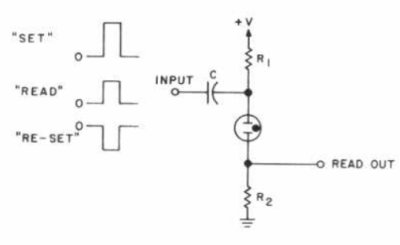 The use of neon in electronic circuits is, of course, from an era that preceded silicon. The use in lighting had its peak in the 60’s, and started to fade after that. Modern types of lighting (you guessed, LED) are preferred for advertising. Nowadays, neon is experiencing a comeback as an architectural and artistic element, and also in some historic projects such as the Route 66 Corridor Restoration Act. We hope it stays with us for the years to come.

43 thoughts on “The Many Uses Of The Neon Lamp”