My Assumed Need: A Filament Monitor

The filament monitors I found were aftermarket or DIY devices. Not counting incomplete Kickstarter projects, I found the aftermarket Tunell Monitor design by [Aaron Tunell] as well as some DIY projects. Most monitored the movement of filament by turning an encoder wheel in some way (filament feed encoder by [Florian], and filament monitor by [RodLaird] for example) and one used the guts of an old PS/2 mouse as a sensor.

These projects were clever, but my needs were much narrower than the solutions they offered. My problem was not a lack of filament encoding. My problem was that over the many hours that made up a print, I couldn’t be there for the right four minutes.

On my printer, if a spool runs dry I can salvage the print as long as I have time to load a new spool and feed the new filament right up against the end of the old filament as it enters the extruder. I measured a minimum four-minute window to do this. Four minutes is plenty of time, as long as I’m ready and able to do the swap when it happens.

The missing piece wasn’t really that my machine didn’t know when the filament spool was empty. The problem was that I – the operator – had four minutes to act when it did empty, but I didn’t have a good way to know when that was.

By narrowing the scope of the problem in this way, I could keep the solution simple. If I assumed I would be within earshot of the printer at least during the hour or two that the spool is expected to run out, I should be able to solve my problem with a simple audio alarm. When the last bit of filament comes off the spool, sound an alarm and I’ll have at least four minutes to feed a new one.

I decided to make a prototype of a simple filament alarm that did nothing more than that. I called it Mister Screamer.

Mister Screamer’s job can be summed up as:

The key elements are:

An enclosure was designed as a sort of clamshell to hold the components. Magnets hold the shell together and also act as power connectors, so putting the halves together (or pulling them apart) serves as the main power switch. Two CR2032 coin cells power a small 80+ decibel buzzer, controlled by a roller switch. When the device is not shrieking, it consumes no power.

The two halves were printed in PLA and components glued in. With the exception of soldering wire leads to the magnets before installing, connections were soldered point-to-point after the components were secured. 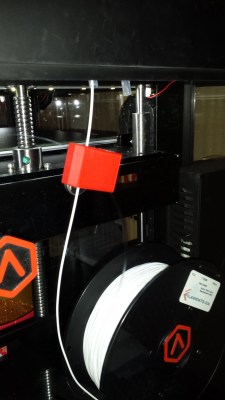 The first trial run of Mister Screamer was a success. The alarm activated, I was able to hear it and easily disable it before feeding a new roll with time to spare. However, while the concept was validated, two big problems became clear:

I was very pleased with the prototype, even though the design needs significant changes before it can be truly useful. It validated my premise (my printer doesn’t need to know it’s out of filament, as long as I know within four minutes), I was able to create it very cheaply, and it helped me verify that the problem that I was solving was one that actually existed.

Effective prototyping is a perishable skill, so it’s good to practice. I have learned that some things always turn out to be more difficult than expected, but there should also be things that turn out to be easier. If I’m ever finding that everything seems to be harder and nothing is easier, I know to take a step back because I’m probably struggling with a bad design or an otherwise doomed project.