We’ve seen a lot of interest in LSM (LASER Scanning Microscopes) lately. [Stoppi71] uses an Arduino, a CD drive, and–of all things–two speakers in his build. The speakers are used to move the sample by very small amounts.

The speakers create motion in the X and Y axis depending on the voltage fed to them via a digital analog converter. [Stoppi71] claims this technique can produce motion in the micron range. His results seem to prove that out. You can see a video about the device, below.

Oddly enough, [Stoppi71] found that older CD drives were easier to work with because they were not as miniaturized as more modern versions. The device uses the Arduino to drive the scanning table (the speakers), and read the photodetector. The results of the scan appear on an LCD screen. 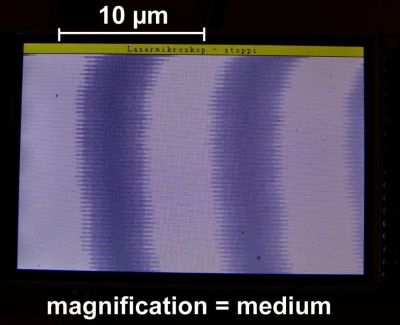 Using a calibration slide from eBay, [Stoppi71] calibrated the device for different magnifications. You can see the test slide at medium magnification. For the record, a human hair is about 40 or 50 microns thick. So the 10 micron mark in the photo would be like splitting a hair in quarters or fifths.

The real goal was to view pits on CDs, and the instrument is more than capable of doing that. The image doesn’t show up all at once (it is scanning, after all) and it isn’t the kind of view you’d expect from an optical microscope, but a typical optical scope can’t resolve below about  0.2 microns. Special techniques can push that lower, but being able to resolve things at the one or two micron level with something this simple is a great accomplishment.

We recently saw a different-looking LSM built on a conventional microscope stage and a DVD drive. If LSM isn’t enough for you, maybe you should pitch in on the open source electron microscope project.