Microswitches have a long history, at least as long as it takes for the original trademarked “Micro Switch” brand to become a generic term. Back in 1932, a company called Burgess Labs in Wisconsin got an order to build 10,000 electric chicken brooders. Charles Burgess, the head honcho of the company, ordered 10,000 switches from a manufacturer, but was dismayed to find out that the switches were not up to snuff. They wouldn’t consistently switch at the same actuation point, and clearly wouldn’t work for the brooders he was already on the hook for. Dr. Burgess assigned one of his mechanics to develop a better switch. Phillip McGall eventually came up with a snap-action switch with the actuation repeatability required for the chicken brooders, and the order was filled.

Fast forward a couple of years, and McGall had patented his “Snap switch.” Burgess Labs started marketing the switches, which ended up in Rock-Ola jukeboxes and other electromechanical products of the growing consumer electronics industry. Burgess eventually sold the Electronics Division of his company, which was turned into the Micro Switch Corporation and later sold to Honeywell in 1950, where it remains a top brand today. 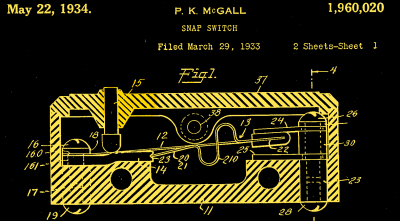 As Dr. Burgess discovered, a plain spring contact in a switch without snap action has a long, often variable throw and a “mushy” action. The principle behind McGall’s snap-action switch is a tipping point mechanism, where the common contact in his switch is made out of a preloaded spring.

The force of the spring keeps the contact in a stable state up against the normally closed contact. When a small amount of pressure is applied to the common contact through an actuator, the preloaded spring deforms at a characteristic and repeatable point, rapidly moving the contact to another state against the normally closed contact. The important feature is that the force applied through the actuator is not directly moving the common contact between normally open and normally closed. The force to move the common comes from its spring tension alone; the actuator just provides the force to deform the spring until it pops through.

The tipping point mechanism in microswitches has quite a few advantages over plain contacts. The repeatability of the mechanism is the big one, as is the rapid make-break cycle. Once the tipping point is reached, the contacts can often switch states in just a few milliseconds. This reduces the chance for arcing and minimizes the time the contacts are in an ambiguous state.

Another benefit of microswitches is their low operating force. Even without the mechanical advantage of a long lever arm bearing on the actuator, only a small amount of force is required to pop the spring and toggle the switch. And the design is flexible, allowing switches that can be tiny enough to be built into the smallest stepper motors to industrial limit switches that are designed to survive the harshest conditions and last for millions of cycles.

Modern microswitch mechanisms hardly differ from McGall’s original patent illustrations. Materials have changed, of course, and there have been a few different designs for preloading the common contact — dished springs, for example, or forked springs where a center “tine” is anchored in a different plane than the outside members. But that the basic principle of these simple devices is now over 75 years old and still used is a testament to good design and solid engineering.

46 thoughts on “Microswitches: Past The Tipping Point”