We just spent a few hours trying to figure out Japanese techno-performance-art-toy company [Maywa Denki]. As self-described “parallel-world electricians”, the small art collective turns out strange electro-mechanical instruments, creates bellows-powered “singing” sculptures, and puts on concerts/demos/lectures. And if you desperately need an extension cord in the shape of a fish skeleton, [Maywa Denki] has you covered. Writing about art is like dancing about economics, so first we’ll just drop a few of our favorites and let you decide. 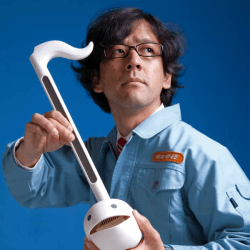 On the serious art front are “nonsense machines” like SeaMoonsII and Wahha Go Go. The most iconic performance piece is probably the Pachi-Moku, a set of finger-snap-activated wooden gongs mounted on anime-style wings. And then there are “toys” like Mr. Knocky and the Otamatone, here demonstrated playing some DEVO.

There’s a lot going on here. The blue suits of the assembly-line worker, the back story as a small-electronics “company”, and the whole art-as-commodity routine is a put into contrast with the mad-inventor schtick make sense both as a reaction against conformist, corporatist postwar Japanese culture or as a postmodern hat-tip to the realities of the modern art scene. But mostly, what comes across is the feeling that [Novmichi Tosa], the “president” of [Maywa Denki] just loves to make crazy gizmos.

How else do you explain the gas-powered, chomping mouth-full-of-knives, Poodle’s Head?

Here are two short documentaries, one in Swiss German with English and the other in Japanese. When the singularity occurs, you’ll have these automatically translated for you and piped directly into your brains. Until then, it’s either take language classes or just sit back and relax. It’s all glorious nonsense anyway.

Thanks, [kodera] for the tip.