Vinyl cutters are one baby step forward in the family tree of pen plotters and digital cutters. (Digital cutting and numerical control and the birth of CNC is an entire article unto itself!) Pen plotters arrived on-scene in the late 50s and early 60s. Rather than punch out a grid of pixels like modern images, which comes with a hefty memory pricetag, plotters traced out vector graphics, which simply took up less memory. In fact, memory was such a premium back in the day that one of the first published algorithms for CNC control of a pen-plotter [PDF] goes so far as to hightlight it’s efficiency “with respect to speed of execution and memory utilization.”

The actual transition from pen plotting into sign-making is vague, but, at some point, a handful of pen-plotting companies also started adding vinyl cutting to their repertoire. Their target audience ranged from everyday signmakers to aircraft giants like Boeing. Luckily, the math and CNC control for vinyl cutters were already a solved problem thanks to a lineage of pen-plotting.

“What else would I use it for?” It’s the age-old question holding us back from getting a vinyl cutter up-and running on our desktop. It’s so common that Make featured a sizeable list of 34 use-cases. Fear not! I had faced this question too. Rather than run through this list again though, I thought I’d pick a small handful and give them some real-world context. Here’s a taste from the community at large using them now. 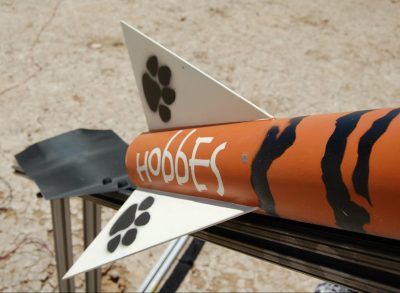 Stencils used to come from the cubbies of my teacher’s art supplies. Now I can make them at will for all sorts of precision paint jobs. Here, a few friends and I gloriously anointed our college rocket experiment with a vinyl stencil of our rocket’s name: “Hobbes.” Just after spray-painting, we quickly peeled off the vinyl to let the paint dry undisturbed. Let’s be honest: years of vandalism couldn’t make my paint skills this classy! There’s a computer at work here, and the vinyl cutter is the precision instrument to go from digital input to digital output.

Little did we know, it turns out that vanilla vinyl isn’t actually the best bet for this paint mask application. Typical vinyl has a pressure-sensitive adhesive. Sticking it down firmly to a surface with our hands kicks off this adhesion process, making it all-too-happy to tear up a recent paint job. Thankfully, a paint mask vinyl exists exclusively for getting around this issue.

For the uninitiated, papercraft costumes have become a smashing hit in the last few years. With an inexpensive software package called Pepakura, you too can start flattening 3D models into panels that you can print, cut, and reconstitute back into real life from folded paper. Here, Pepakura takes care of generating a vector graphic from you model, and the vinyl cutter actually eliminates one of the biggest pinch-points in this process: labeling and cutting out the paper. While mere mortals armed with vanilla inkjet printers will then need to don a pair of scissors to actually cut out the model, a vinyl cutter will cut everything out for us automatically. 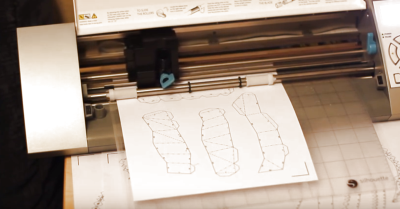 Just how does the cutter work its magic? These days, many hobbyist vinyl cutters also come with a plastic “sticky” mat that will hold paper down so the cutting tool can lay down its pattern. Simply tack down a piece of cardstock onto this sheet and then load the mat. Within this domain there are two options for getting a crease pattern and labels on the individual pieces. Some modelers will print the design with a normal printer, align it to the cutting mat with registration marks, and cut the image from the printed paper. Others, with the right vinyl cutter model, can actually swap the blade for a pen and run two separate options: plot the fold pattern and labels; then, cut the pieces out. Turning the old Silhouette Cameo Vinyl Cutter into a plotter used to be a hack, but now plenty of third parties sell pen holders for various vinyl cutter brands.

Remember those complicated origami pieces of yore? Wouldn’t it be nice to pre-crease those papers before our sloppy fingers put fold-after-fold in the wrong place? Now you can!

Possibly one of the most overlooked features of the vinyl cutter is simply not-cutting-completely-through our media. The path of the partial cuts become “score-lines,” which makes folding a cinch. Presto! What may have taken hours by hand now takes a mere matter of minutes–and the execution is flawless every time.

Sure, nothing is perfect. Here, scoring works well for folds on one side of the paper, but to get the full benefit, we’ll need to score both sides accordingly. While the vinyl cutter leads a quiet life among hackers, it’s a go-to tool in the folding research community. [Evgueni Filipov] is iterating variations of “zippered tubes” for deployable structural applications. [Cynthia Sung] is prototyping robots that fold themselves together. 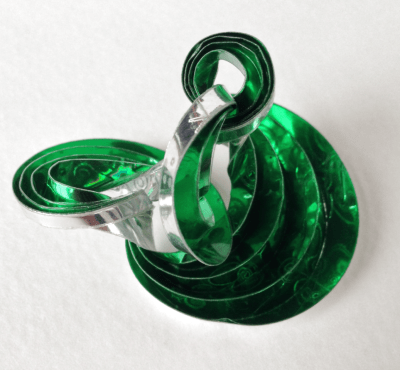 Most of us have almost certainly folded up a paper plane or origami crane before. Most of these pieces involve straight creases. Boring, right? It turns out that, with some patience and finesse, it’s possible to put together models composed of curved folds. Unlike straight folds, curved folds are nigh impossible to get straight (whoop!) without some sort of reference. (A paper printout should do the trick.) To get a sense of how labor-intense this can be, have a go at this curved folding tutorial [PDF].

As far as putting curved creases into paper by hand goes, individual results may vary. Fortunately, with the paper-creasing vinyl cutter trick, we can spare ourselves hours of tension and cut to the chase by removing the manual effort of creasing entirely.  What may have been otherwise inaccessible for most has been tamed and democratized by a CNC creaser. It’s applications like these that make me take a deep breath and think: ah, what a marvelous digital age we now live in.

For the curious eager to jump into more curved folding, check out the works of [Cody Reisdorf] and a brief history by Erik and Martin Demaine.

Our Only Hope for Cutting Vinyl

Here on Hackaday, it’s so tempting to use the wrong tool to get the job done quickly. (I’m looking at all those in the audience with chipped teeth from a naughty history of wire stripping.) If you had a laser cutter and wanted to make some vinyl stickers, you could be forgiven for turning your remaining eye in that directioni. But burning through vinyl with a laser cutter will actually release chlorine gas which has the nasty side-effect of corroding laser optics and being fatal for humans. Here, precision burning vinyl wont make the cut.

After all of the folding and stencil-making uses listed above, it’s easy to forget to use the tool as it’s intended, but when it comes to cutting vinyl, the right tool is a vinyl cutter.

61 thoughts on “A Case For The Desktop Vinyl Cutter”