I have storage on the mind, and it comes from two facts in my life:

First, I have tons of stuff in my workshop, far too much for the amount of space I have. A lot of this material is much easier to use if it’s well-organized. Think electronics, robotics, building sets. Modular parts that need to go together a certain way for them to be useful. It is imperative, therefore, that I come up with some sort of organization system to keep the chaos in check.

Second, my favorite tool is the laser cutter, born from my love for building vector designs. I can do art on the computer and have it manufactured in front of my eyes, and share my designs with someone else who can remix it into something even cooler.

So with those two facts in mind, I set about creating a modular storage system in Inkscape and cutting out the design from pine boards using a laser cutter. Let us go on a journey through my thought process: 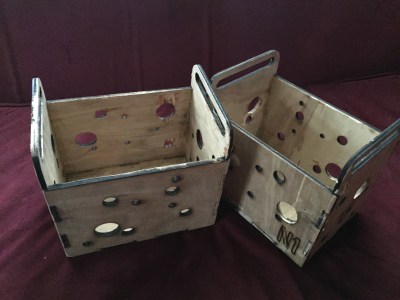 I’m continually amazed at the diversity and creativity of the laser projects I see at the hackerspace. Stuff I wouldn’t even think of, let alone create. That said, practical creations also abound. I’m talking chiefly about boxes: project enclosures are a popular choice. Thanks to such online services as makercase.com, it’s one of the simplest laser projects to create one’s own wooden box or crate.

I’ve made a dozen different storage boxes and crates of various configurations, big and small. They’re fine, but nothing to beat the coroplast box in terms of strength. Even a thoroughly-glued box made from 1/4″ plywood breaks apart when you try to put something heavy inside. Glued wood is only so strong.

Plus there is the problem of cost. Laserable plywood isn’t too expensive, but creating fifty small lidded boxes actually sounds like a ton of time and money. I love making crate-like projects, and I’m going to keep doing it, but ultimately the box isn’t a good solution for me. 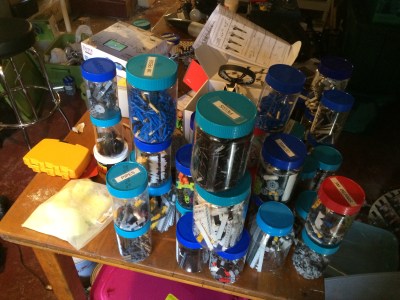 You would not believe the peanut butter jars I have in my basement, accumulated over the years of three kids worth of sandwiches. Well, look at that heap of parts over on the right. I have enough jars to cover a typical dining room table twice over.

I originally took to using peanut butter jars to store Mindstorms parts after first trying ziplock bags. The parts tore through the bags and it didn’t store well, plus it was hard labeling the bags in a way that could be readily discerned. But peanut butter jars, in the commonplace 16-oz and 40-oz sizes, were tough enough for any part that could fit inside them, and could be easily labeled.

I began to use them for hardware as well — nuts and bolts. Also clothespins, screw eyes, standoffs, rubber bands, resistors on tape — anything that can fit inside. The jars are great. They close, they’re waterproof, they come in multiple sizes, and they are sturdy — stuff can be stacked on them and nothing tears through them. And when you’re done with them, they can be recycled.

These days I have too many jars. Digging through a large cardboard box for a specific type of LEGO brick can take 20 minutes, which kind of defeats the purpose of using the jars. I needed to create something that combines the jars and a laser-cut box. A modular jar holder.

The number of jars per holder is important. They can get quite heavy depending on the contents. My 40-oz jar of quarter-inch bolts is less than half full but already weighs a ton. Imagine ten of these; not only might they break any kind of wooden storage method, but they would be a pain to lift. So, consideration number one of designing storage is, can you still lift it afterwards?

When I’m talking about peanut butter jars, I’m referring to the main products of the two biggest brands. Both Jif and Skippy sell product in nearly identical 16 oz jars. Smooth peanut butter is signified by light blue lids for Skippy and red lids for Jif. Both companies use dark blue lids for crunchy. The jars themselves are 72mm wide for Skippy and 74mm wide for Jif, making their lids non-compatible. Both brands jars are precisely the same height, however, coming in at 127 mm or 5″. Both companies also sell larger sizes of jar, of which I’ve chosen the 40-ouncer as my other go-to size. They’re essentially interchangeable other than the fact that their lids are incompatible. There are other companies and other packaging styles, but at least in my house, the Jif/Skippy 16/40oz jars are king, and so that’s what I used.

So, knowing the dimensions of the jars, all I needed was to figure out how to store them. 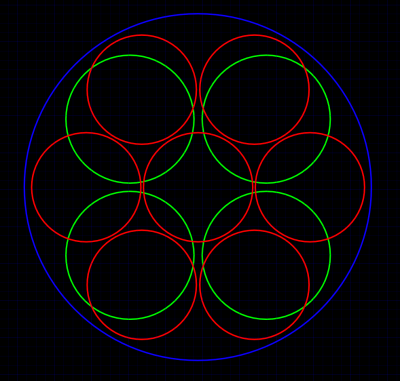 I sat down with my sketchbook and brainstormed some ideas, keeping some guiding principles in mind:

After playing around with different numbers of jars, I settled on seven 16oz or four 40oz per box. It seemed like a nice number and I could see myself lifting 21 small jars or 12 big ones of pretty much anything.

I began with a hexagon shape (remember, not square or rectangle!) with the idea that it would be some sort of box. Maybe I could do 3” walls of some sort? A hexagonal box, maybe. But then I realized that I didn’t really need the edges. What purpose did they serve? The jars have their own structural strength that is all that the system needs. The fact that both Jif and Skippy have the same height jars meant I could store both kinds with the same system. What I had to create was a tray of some sort, just enough to keep the seven (or four) jars from sliding around—even just indentations might be enough. 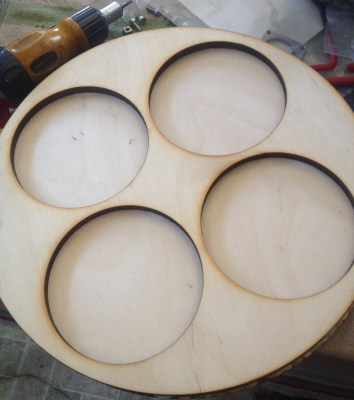 I thought about handles. Would it be easier to lift up a stack if each layer had handles? I decided against it. I’m using 1/4” plywood and little handles made out of that stuff would quickly break. Instead I was going to rely on the spaces between the jars to grab ahold of— there was enough rooom for a couple of fingertips between each small bottle. Rather than walls, each carrier would have indentations so the jars wouldn’t slide around. As an added bonus over the walls method, you can still see into the jars with this type of system. On the down side, it wouldn’t be as solid other systems I could imagine—a stack could be tipped over.

So I threw seven 75 mm circles into Inkscape and settled on a hexagon of six with the seventh one inside. It was modest in size as well as non-rectilinear. I changed he hexagon to a circle because there wasn’t any need for it. While I was at it I added four larger circles for the 40-oz jars. Finally, I designed a layer that was an amalgamation of the two circle patterns, four big circles overlapping seven smaller ones. That way there is a standard base that fits on the top of either type of lid size. 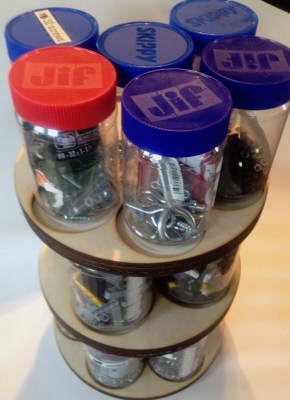 I bought four 12″ x 24″ pieces of laser-friendly birch plywood from the Home Depot — you can find it in both 1/8″ and 1/4″ and it cuts like a dream. Each sheet is enough wood for two discs, and that meant I had only enough wood to cut 8 discs, which meant that I could make just 3 discs with my $20 budget. There would be three layers of quarter-inch plywood per carrier, with the bottom disc eschewing the bottom later.

The design lasered out like a dream, and I simply glued together each set using regular Elmer’s white glue. I would rate this project as highly successful in that the sets of jars nested nicely together.

That said, I immediately came up with some ideas for improvement. I designed the jar-holes based on the lids’ dimensions, but the jars’ bases are more rounded.

Also, I felt that there did need to be some sort of walls to keep the jars in check, if only 1-2 more layers of plywood. I would also like to work some further layer of organization into the system. I’m thinking of color-coding each tray depending on what goes inside the jars: maybe black for hardware and red for LEGO?

If you want to take up the challenge, I have created a Hackaday.io project to share what I have learned. And start saving those jars.

22 thoughts on “Modular Storage With Peanut Butter And Lasers”