For anyone with interest in electric vehicles, especially drives and control systems for EV’s, the Endless-Sphere forum is the place to frequent. It’s full of some amazing projects covering electric skateboards to cars and everything in between. [Marcos Chaparro] recently posted details of his controller project — the VESC-controller, an open source controller capable of driving motors up to 200 hp.

[Marcos]’s controller is a fork of the VESC by [Benjamin Vedder] who has an almost cult following among the forum for “creating something that all DIY electric skateboard builders have been longing for, an open source, highly programmable, high voltage, reliable speed controller to use in DIY eboard projects”. We’ve covered several VESC projects here at Hackaday. 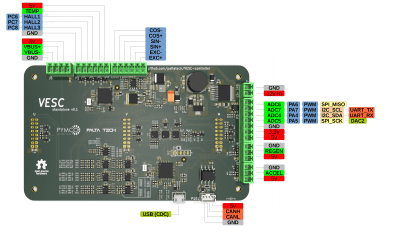 While [Vedder]’s controller is aimed at low power applications such as skate board motors, [Marcos]’s version amps it up several notches. It uses 600 V 600 A IGBT modules and 460 A current sensors capable of powering BLDC motors up to 150 kW. Since the control logic is seperated from the gate drivers and IGBT’s, it’s possible to adapt it for high power applications. All design files are available on the Github repository. The feature list of this amazing build is so long, it’s best to head over to the forum to check out the nitty-gritty details. And [Marcos] is already thinking about removing all the analog sensing in favour of using voltage and current sensors with digital outputs for the next revision. He reckons using a FPGA plus flash memory can replace a big chunk of the analog parts from the bill of materials. This would eliminate tolerance, drift and noise issues associated with the analog parts.

[Marcos] is also working on refining a reference design for a power interface board that includes gate drivers, power mosfets, DC link and differential voltage/current sensing. Design files for this interface board are available from his GitHub repo too. According to [Marcos], with better sensors and a beefier power stage, the same control board should work for motors in excess of 500 hp. Check out the video after the break showing the VESC-controller being put through its paces for an initial trial.