Lasers are such a fundamental piece of technology today that we hardly notice them. So cheap that they can be given away as toys and so versatile that they make everything from DVD players to corneal surgery a reality, lasers are one of the building blocks of the modern world. Yet lasers were once the exclusive province of physicists, laboring over expansive and expensive experimental setups that seemed more the stuff of science fiction than workhouse tool of communications and so many other fields. The laser has been wildly successful, and the story of its development is an intriguing tale of observation, perseverance, and the importance of keeping good notes.

Like seemingly all of the major innovations in the latter half of the 20th century, the laser has a lineage that can be traced back to the leafy New Jersey campus of Bell Laboratories. But unlike some of the inventions that sprang solely from that great institution of innovation, most notably the transistor, the laser was a result of discoveries and developments from around the world over a span of decades.

Even so, the development of the laser was largely driven by the imperatives of AT&T, the parent of Bell Labs. Telephone systems in the United States and around the world were expanding rapidly through the early 20th century, and engineers were beginning to realize that simple copper wires would be inadequate to the needs of a global communications system. As the telegraph gave way to the telephone and television came on the scene, it was clear that they’d have to look for new ways to transmit vastly more information. That meant more bandwidth, and that meant using higher and higher frequencies. Looking to the future, they realized that light would be the medium someday, but a whole range of technologies would need to be invented first.

While communication with beams of light was the stretch goal, improvements in radio communications were what was achievable in the early 1950s. Again looking to the future, AT&T hoped to one day have communication satellites in orbit around the planet, acting as relay points for long-haul connections. Providing the necessary bandwidth would require microwave links, and to reach a satellite in orbit would require new designs for transmitters and receivers. A way to amplify weak microwave signals would also be needed.

Enter Charles Hard Townes, Columbia physicist and a former Bell Labs researcher. In 1950, Townes was exploring the phenomenon of stimulated emission, the process by which incident photons can interact with atoms in an excited state, knocking them back to the ground state and releasing a new photon identical to the first photon in every way. Townes thought it would be possible to use this photonic duplicating machine to produce intense beams of microwave radiation, and had spent years building a device to prove the concept.

He called the concept microwave amplification by stimulated emission of radiation and dubbed his device a ‘maser’. It used a stream of ammonia gas pumped through a narrow slit and through an electric field into a resonating chamber. The excited ammonia atoms would be “pumped” with microwave radiation in the chamber, causing stimulated emission and massive amplification that was released as a powerful, highly focused beam of microwaves at around 24 GHz.

Townes demonstrated his maser in 1954, and Bell Labs quickly picked up on the device, building their own version in 1957 using a solid crystal rather than ammonia gas. They were also quick to pick up on the potential for the device to amplify weak microwave signals from a yet-to-be-built communications satellite. They wouldn’t have to wait long, though, as in October of that same year Sputnik flew overhead and launched humanity into the Space Age.

By that point, Townes was back at Bell Labs, having been rehired as a consultant. A 1957 lunch with his Bell colleague and brother-in-law Arthur Schawlow led to a discussion about the maser and how it might be used to amplify even shorter wavelengths than the millimeter waves currently produced. Could a maser be modified to amplify light? Schawlow had already been thinking about using a maser to amplify infrared light, and Townes was intrigued by the potential of creating intense light in the visible part of the spectrum. Townes and Schawlow worked out the theoretical underpinnings of an “optical maser” and applied for a patent on the idea in 1958.

Meanwhile, across the Hudson in New York City, a young physics student named Gordon Gould was working along the same lines. Gould, fresh off a stint with the Manhattan Project that was cut short by his past ties to the Communist Political Association, was working on a doctorate in optical and microwave spectroscopy. In 1956 he had an idea to achieve stimulated emission using optical pumping rather than microwaves. He discussed his idea with none other than Charles Townes, who was still a Columbia physics professor.

Gould felt his invention was patentable, but didn’t know the ins and outs of getting a patent. Townes advised him to start writing everything down. Gould bought a cheap notebook and started writing down “Some rough calculations on the feasibility of a LASER: Light Amplification by Stimulated Emission of Radiation.”

The key to creating a laser, Gould realized, would be designing a proper optical resonator. His design included parallel mirrors of the sort used in Fabry-Pérot interferometers, devices familiar to Gould through his doctoral work. He knew that his notebook represented a substantially complete design for a working laser, and he desperately wanted to patent his invention, so he found a notary and got the notebook witnessed. Thinking this protected him, and working under the misguided assumption that he needed a working prototype to be awarded a patent, Gould dropped out of Columbia to pursue employment with a company with deep enough pockets to fund a prototype laser.

Gould had some success, joining Technical Research Group, a private research firm. He persuaded them to fund his research, which they did through a grant by the brand new Advanced Research Projects Agency (ARPA). ARPA administrators took a keen interest in Gould’s laser technology and funded it generously. Just as it seemed that Gould would be able to build his gadget and patent it, his past came back to haunt him. ARPA considered the project vital to national security and immediately classified it. This meant anyone working on the laser would need a security clearance, which Gould’s youthful Communist activities precluded. He was effectively shut out of his own project.

Hampered though they were by Gould’s absence, TRG made progress toward a visible light laser. But TRG wasn’t the only entity working on a practical laser in the late 50s, of course. Townes and Schawlow were still laboring away on open-resonator designs strikingly similar to Gould’s but arrived at independently.

In the end, both TRG and Bell Labs would be trumped in May of 1960 when Theodore Maiman, a physicist at the Hughes Aircraft Corporation in California, made the shocking announcement of a working laser. At a public press conference in July of that year, Maiman showed off his device, which used the now-familiar solid state design (in the physics sense; semiconductor lasers would come later) of a ruby rod with ends ground completely parallel and partially silvered, inside a reflector with a xenon flashlamp. When pumped by the powerful blue-white xenon arc, the ruby crystal underwent stimulated emission and released a pulse of coherent light at 694 nm wavelength, powerful enough to ignite a match, pop a balloon, or put a hole in a razor blade. The laser had arrived. 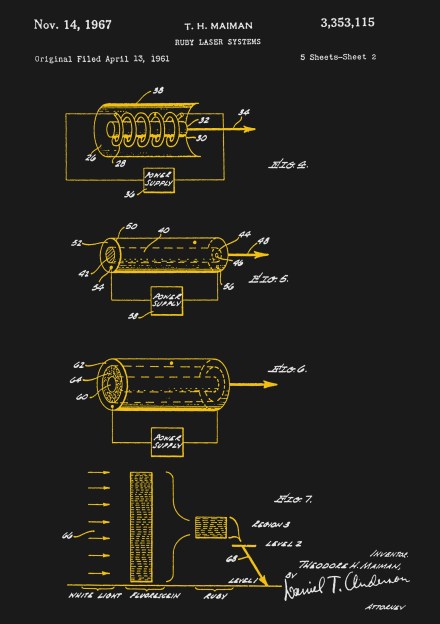 For as long as the laser took to gestate, once it was born the advances came rapidly. A continuous-mode gas laser using a mixture of helium and neon was developed later that same year. Two years later the first semiconductor IR laser was demonstrated, followed quickly by a visible light laser diode. Semiconductor laser development eventually led to the first room-temperature visible laser diode in 1970; previous laser diodes needed to be cooled with liquid nitrogen to work. The advent of semiconductor lasers and the parallel innovation of optically pure glass fibers meant that AT&T could finally realize the full potential of light communications.

It’s hard to imagine the modern world without the benefit of the laser, and most of the laser’s many fathers were duly recognized. Townes won the 1964 Nobel Prize in Physics along with Russians Nikolay Basov and Alexander Prokhorov, who had been working on quantum oscillators while Townes was designing his maser.

But recognition for Gordon Gould’s role would wait almost 30 years. He filed lawsuit after lawsuit in an attempt to show that he was the rightful inventor of the laser, but again and again he was turned down. He kept trying, though, and in 1987, after having founded and run a successful fiber optic communications company, he was finally awarded a patent on the “optical pumping” aspect of lasers, based in part on the designs he sketched out in that notebook three decades earlier. Gould and the company he founded specifically to prosecute his patent war eventually took control of one major laser manufacturer and forced most of the rest to pay royalties to license his patents. But while the legal system made its opinion known as to the parentage of the laser, scientific opinion remains mixed to this day as to exactly who invented the laser.

36 thoughts on “First Light: The Story Of The Laser”