Given the incredibly low prices on some of the models currently on the market, it’s more than likely a number of Hackaday readers have come out of the holiday season with a shiny new desktop 3D printer. It’s even possible some of you have already made the realization that 3D printing is a bit harder than you imagined. Sure the newer generation of 3D printers make it easier than ever, but it’s still not the same “click and forget” experience of printing on paper, for instance.

In light of this, I thought it might be nice to start off the new year with some advice for those who’ve suddenly found themselves lost in a forest of PLA. Some of this information may seem obvious to those of us who’ve spent years huddled over a print bed, but as with many technical pursuits, we tend to take for granted the knowledge gained from experience. For my own part, the challenges I faced years ago with my first wooden 3D printer were wholly different than what I imagined. I assumed that the real challenge would be getting the machine assembled and running, but the time it took to build the machine was nothing in comparison to the hours and hours of trial and error it took before I gained the confidence to really utilize the technology.

Of course, everyone’s experience is bound to be different, and we’d love to hear about yours in the comments. Grand successes, crushing defeats, and everything in between. It’s all part of the learning process, and all valuable information for those who are just starting out. 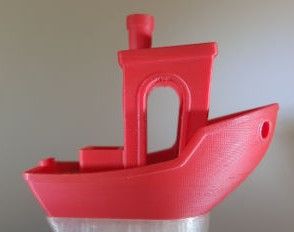 If you just plugged in your 3D printer, your first project shouldn’t be a replica DOOM rifle that takes 30+ hours over dozens of prints to complete. You need to start small, but more importantly than that, you need to establish what kind of condition the printer is in. You want to determine how well the machine is calibrated and setup, but it’s also helpful to have a reference point for what the print quality was like when the machine was brand new out of the box.

One of those things they don’t tell you going in is that there are certain degenerative issues inherent to 3D printers: nozzles wear out, belts get lose and worn down, beds warp, and so on. If one of your first prints is a common benchmark like the extremely popular “Benchy”, or even a classic calibration cube, then you’ll have a physical reference point you can later compare with your current prints to see if quality has begun to degrade.

There are many variables involved in producing high quality 3D prints, and even early on, you’re likely to notice some trends as you experiment. Different brands of filaments may require different temperatures for good bed adhesion and surface detail, even if it’s all PLA. You may find where you are 3D printing is often just as important as how. The temperature and humidity of your work area can have a direct impact on your printing experience, and you might find that you have more difficulty getting prints to stick to the bed in winter than in summer.

As you make these discoveries, record them. You’ll really be kicking yourself if you forgot the proper temperature and extrusion multiplier for a specific brand of PLA that you haven’t used in awhile, and you come home to a print that looks terrible because of it. I’m not going to say this exact scenario happened to me a week or so back, but just keep it in mind as a hypothetical.

As previously mentioned, there are some issues which can crop up on your printer over time, but unless you’re really cranking stuff out it will take awhile before they manifest themselves. Checking your belts every six months or so should be sufficient. You want to make sure that the teeth aren’t worn down, and that they are at the proper tension. It’s not the most scientific method, but you should be able to pluck your belts and hear a deep twang sound, not unlike a bass guitar. If they don’t make a sound when plucked, they’re probably too loose and should be tightened by whatever method your particular printer uses.

Nozzle wear is a bit harder to quantify. Under normal conditions using straight PLA, you’re looking at nozzle wear on a scale of years. It’s entirely possible you’ll upgrade to a newer 3D printer before your nozzle wears out. But if you’re using more abrasive filaments, such as PLA with additives (wood, metal, stone, etc) or glow in the dark filament, then you could go through nozzles rather quickly. If you’re seeing poor print quality after running through a couple rolls of this sort of filament, it’s probably time to change your nozzle.

Lubrication should be done on a regular basis. That doesn’t mean spraying the printer with WD-40 either, that stuff has no business near the plastic parts that many printers use. For linear bearings and rods you want a light machine oil. On threaded rod, especially if running through metal nuts, you should be using a thin lithium grease. You should also be cleaning out any dust and debris that has a tendency to build up on the rods by wiping them down with a soft cloth before applying your oil.

This one’s easy: just print some stuff. You don’t have to print every day, but printing something every week or at least every month should be a goal to keep in the back of your mind. Like anything else, 3D printing takes some practice to get the hang of, so you need to do it often. You don’t want to break out your printer the day before you’ve got a big project and struggle to remember how the software works, or what the proper process is for leveling the bed.

Websites like Thingiverse, Pinshape, and YouMagine are overflowing with interesting models to print, running the gamut from desk toys to legitimate tools. Keep an eye on the newly added models on sites like these and print out anything that catches your eye. Be sure to post a picture of your print and give some feedback to the creator as well; that’s the kind of thing that keeps the community going.

I’ll wrap this is up with the last piece of advice I always give new 3D printer owners: design something. It’s a lot of fun finding neat models and printing them out, and you’ll probably get a couple months of enjoyment out of that alone. But imagine if you bought a paper printer and all you ever did with it was print out cat pictures you found online. That would be kind of weird, right? Start small with something easy to pick up like TinkerCAD, and see where your imagination takes you.

The true “Eureka” moment with desktop 3D printing is the first time you successfully print one of your own designs, the first time you look at the rendering on your computer and down at the physical object in your hand and realize you’ve effectively given birth to a little plastic baby. I still have the very first print I made based on my own design: it’s an ugly little bracket that looks like it was extruded with a glue stick, and I have no idea what it was even supposed to be for at this point. But years later it’s still sitting in my desk drawer as a reminder of the moment I realized 3D printing was more than a novelty.