The key bit of hardware in the Goodwatch is the CC430 from TI, an honestly astonishing little microcontroller that includes an LCD driver, a 16-bit MSP430 microcontroller, ADC, a surprising amount of Flash and RAM, and of course a CC1101 radio capable of transmitting in the usual ISM bands. This chip is already found in a few popular projects including the Faraday Open Source digital radio, but the real draw here is the incredible intersection of a peripheral set, low power consumption, and radio. 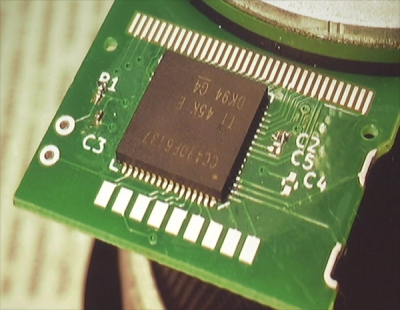 So, how do you clone a tiny PCB from a calculator watch? The mechanical design of this project was actually the easiest and is decidedly un-clever — just grab some calipers and draw something in a CAD package. Decoding the pinout for the LCD is quite a bit more complicated.

These LCDs have four common pins and more than two dozen segment pins. After figuring out the common pins, [Travis] didn’t really want to open up the watch dozens of times to figure out the LCD, so he simply wrote a bit of code to light up a pixel and clear a pixel. Yes, it still requires a pixel ‘map’ for each pin combination, but thanks to the MSP430’s nifty memory mapped I/O, this code is very simple and very useful once the map is complete.

Right now, [Travis] has a real, working calculator watch PCB that drops right into the Casio CA-53W watch body that nearly anyone can build for themselves. There are some caveats — the radio doesn’t work with the black wristbands because of the oxide layer, and these are miniscule QFN and 0201 components — but this is a proper RPN calculator watch that’s also a radio transmitter. It doesn’t get better than that.

15 thoughts on “Shmoocon: Advanced Low Power Techniques And A Watch”