For those who don’t spend their free time creating music with experimental audio effects, a plate reverb is essentially a speaker. It just happens to be, by design, a rather poor one. Rather than using a paper cone for a diaphragm like a traditional speaker, the plate reverb uses as you might guess, a metal plate. As the plate vibrates along with the source audio, a set of piezoelectric pickups convert that to an output. The end result is that audio fed into the plate reverb comes out with a nice echo effect. 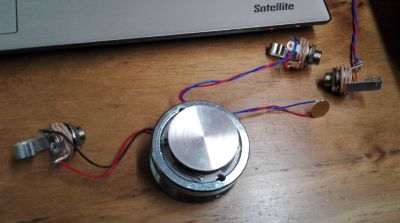 But despite their relative simplicity, a plate reverb costs thousands of dollars. They’re so expensive that the majority of people just emulate the effect in software. But it doesn’t have to be that way. [Sammartino] and an audio engineer friend recently came up with a detailed guide for building a plate reverb that cost about 10% of commercially available models.

The construction is fairly simple. A wooden frame is built, and eight hooks are installed around the edges. The plate is suspended between these hooks using guitar strings, which holds it tight but with enough give to vibrate along with the tunes. Another board is attached across the center of the frame to support the electronics: a transducer to vibrate the plate, and two piezo pickups to convert that to an audio signal, and a couple jacks and some wiring to tie it all together.

For a different take on the DIY plate reverb, check out this one we covered all the way back in 2013. If you’re in the market for something a bit larger, we’ve got you covered there as well.

18 thoughts on “Building A Plate Reverb On The Cheap”