First and foremost — Imperial or metric? If you’re buying a new machine and you reside outside North America, the answer is, of course, metric. If you’re in North America, however, the choice is less clear. The gut instinct may be to go metric because it’s modern and “obviously better”, right? Well, not so fast. Most stock, hardware, and tools in North America are still more readily and cheaply found in Imperial sizes. You can go all metric, but you will be swimming against the current. That ivory tower has a lot of stairs, so think hard about how badly you want to sit in it.

The next statement will shock and anger many of you, but here goes. For machine tool work, there is minimal practical difference between the two systems of measurement. Both have advantages and disadvantages. Before the Metric Squad spools up their decimal angry commenting machines, allow me to explain.

For dimensioning tasks in the typical range of machine parts (say, smaller than your hand), Imperial is easier. Thousandths are very convenient because everything is an integer, and common tolerances for press fits, hole clearances, etc, are all easily expressed and measured. With metric, you’re dealing in fractions of a millimeter, and there’s a lot of decimal points.

When working with hardware, such as drilling and tapping holes, choosing and measuring fasteners, and so forth, metric is definitely nicer. Metric drill sizes are easier to manage than the wacky Fraction-Letter-Number system that Imperial evolved into. The relationships between holes, threads, and fastener dimensions in metric are logical and easy to manage. With Imperial, you tape a chart to your wall and look at it a lot.

My personal recommendation is to be comfortable with both. Either machine can do both, though all tasks will be easier in the system the machine is designed for. Choose measuring tools that have both systems. Lots of the best books on machine shop theory and practice were written before metric existed, so be bilingual in your systems of measure.

Okay, let’s talk power, now. The basic options you will encounter are household AC, three-phase AC, and DC. A household AC machine will typically use belts or gears to change the speed. You can make it more flexible by putting a big rheostat upstream of its power cord. Three-phase AC is typical of big industrial machines. You can replace the motor, or generate three-phase with a rotary converter (noisy and limited) or a Variable Frequency Drive (sexy). VFDs are the weapon of choice for one or two machines. If you have a whole shop full of big three-phase iron, a large rotary converter for the building makes more sense. However, VFDs are small, easy to use, and give you variable speed. They are complex and outside the scope of this article, but know that they exist.

For newer Asian machines, an exciting new option exists — brushless DC. These lathes get a lot of torque for their size. One horsepower for 10amps is typical, and that’s a lot of power for a small machine. You also get infinitely variable speed control for free, which is a huge advantage (especially when you’re first learning the dark art of feeds and speeds).

The next thing to think about is power feed. Most lathes have it, but it comes in many forms. Power feeding is valuable because it yields better surface finishes, and takes much of the tedium out of long operations. It’s also how single-point thread cutting is done — the drivetrain is synchronized to generate the right helix for the thread you need.

Almost all machines will have a half-nut that clamps to the lead screw for cutting threads. The cheapest machines will also rely on this for power feed. The next level up in quality will have a separate clutch (in addition to the half-nut) for driving the carriage. This is typically done with a keyway that runs the length of the lead screw. A keyed gear in the carriage taps power off this, without engaging with the threads of the lead screw. This is a nice compromise because you don’t wear out the leadscrew threads, but the machine remains inexpensive. Larger and higher-end machines will have a dedicated driveshaft running parallel to the lead screw to drive the carriage. You may see multiple shafts running parallel, some for power transmission, some for various control functions. It gets crazy up there in the clouds with the likes of Monarch and Lodge & Shipley.

Benchtop machines typically only have longitudinal power feed (the carriage, or “X-axis” if you like). Some higher end bench top machines are now starting to offer power cross-feed as well, and this is a very nice feature if you’ll be facing larger diameter pieces. It also helps get smooth parting operations. Larger machines will have power cross-feed de rigeur.

The final element of power feed is the driving of the lead screw. This can be done with change gears, a transmission, or some combination thereof. Low end machines will have only change-gears, which means you need to physically swap out gear sets for every change of feed-speed that you want. This is the road to hell. Look for a quick-change gearbox with three or more speed options. Some also have a reverse feed option, which is a nice touch, because you can cut left-hand threads. Higher-end machines will have transmissions as complex as a tractor, with all manner of speed and direction options. These are great to use, but be wary of complex gear boxes if you’re doing a restoration project. It’s easy to underestimate the complexity of the drivetrain in these beasts, and many are filled with unobtainium parts that were abused by some gear-jamming rig jockey of years past.

Now let’s talk tool posts. These days, lower end machines will have a four-way tool post, which holds one cutting tool, and three things to slash your hand open when you brush past them. Tool height is set with shims and a lot of swearing. 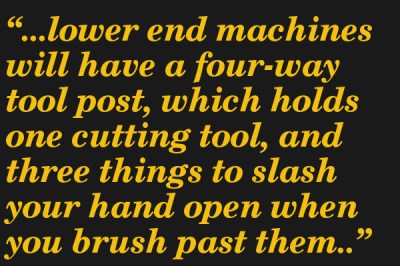 For a little more money, you can generally get a Quick Change Tool Post. On these, tool height is set with a thumbscrew on the tool holder, and the setting is permanently “saved” with each tool. QCTPs are all pretty much based on the Aloris design of years past. Cheaper ones will have a piston lock, slightly better ones will have a tapered wedge lock. Both are fine. Let’s be clear on this point: get a quick change tool post. It will change your life (and get you addicted to tool holders). Just make sure it’s a standard size, like AXA or BXA. Otherwise you’ll spend a fortune on tool holders, and trust me, you never have enough tool holders. I throw a couple on the invoice with every order I place at suppliers like MSC Direct or LittleMachineShop, and it’s still never enough.

Really old machines will have “lantern” tool posts, which use a curved wedge to set tool height and angle. Purists like these for the old-timey aesthetic, but they aren’t very rigid and you had best not be in a hurry when setting one up.

Chucks, Rests, and Other Accessories

The last major thing to look for is what accessories the machine comes with. If you only get one chuck, make it an independent four-jaw. It’s easily the most versatile. Three-jaw scroll chucks are a convenience (and they are turbo convenient) but you will need an independent four-jaw for true precision work. You also want a faceplate for all the odd-shaped things. Exotic options include a collet chuck, 4-jaw scroll chuck, and six-jaw chucks. These are very expensive new, but older project machines often come with great stuff like this. Buy all these extra chucks new if you are made of money or because you hate me and want to send me photos of nice things I can’t have.

Also worth noting are the rests. Any machine should come with a steady-rest, which is used to support the end of a long piece when the tailstock would be in the way. Less commonly used is the follow-rest, which rides on the carriage and applies counter-pressure to the back side of where the tool is cutting. This is useful for working on long thin pieces, where the work would deflect under cutting pressure. New machines will come with both rests, but old used machines may not. These can be hard to find for a vintage machine after the fact, so try to make sure you get a steady-rest, at least.

If you’re shopping for a lathe (and you should be) you’ll quickly find that every machine differs along one of these vectors. There are a lot of choices, even within the same brand and size range, so research carefully. When buying new, I recommend downloading the manuals for the machines to see exactly what features they have. When buying used, learn to scrutinize grainy flip-phone photos on craigslist for desirable details like a separate drive shaft for the carriage or a dusty old collet chuck sitting in the back. Like buying a car, buying a machine tool is an exercise is cross-referencing the features you want with the features you can afford, to find your own sweet spot.

Happy lathe shopping! Next time we’ll talk about getting ready to receive your new machine, and setting up its new home in your shop.

Machinist Tools: Edge Finding
The Machinists’ Mantra: Precision, Thy Name Is Rigidity
Lathe Headstock Alignment: Cutting A Test Bar
The Machinists’ Mantra: Level Thy Lathe
Preparing For A Lathe: How To Move 3000 Pounds Of Iron
A Buyer’s Guide To Lathe Options
Buying Machine Tools: Foreign Or Domestic, New Or Used?
The King Of Machine Tools
The Precision Upon Which Civilizations Are Built
See all articles in this series →

56 thoughts on “A Buyer’s Guide To Lathe Options”