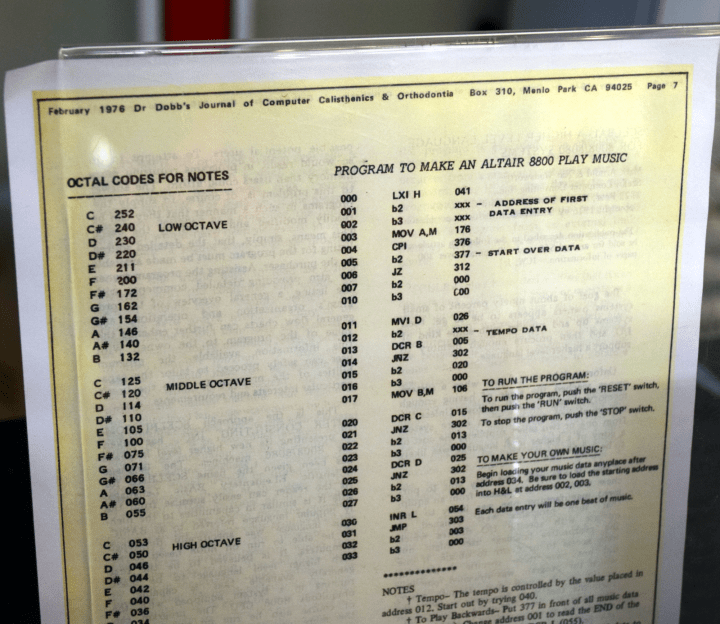 But as it turns out, the RTL-SDR project wasn’t the first time software and hardware serendipitously combined to allow hackers to pull back the curtain on the world of radio. All the way back in 1975, an article written by Steve Dompier was published in the People’s Computer Company Newsletter and republished in Dr. Dobb’s Journal of Computer Calisthenics & Orthodontia in 1976 that described a very curious discovery. Nearly a decade before a team at Raytheon would coin the term “software radio”, the article showed that with just a few lines of code one could generate AM radio transmissions from their MITS Altair 8800.

At the time, this was a huge deal. Some even argue that it made an AM radio one of the first I/O devices for use with the Altair 8800. At demonstration of the code at a meeting of the Homebrew Computer Club reportedly ended in a round of wild applause, and Bill Gates would later describe it as one of “The best demo programs I’ve seen for the Altair.” A particularly strong endorsement, considering at this point Gates would have been pushing Microsoft’s BASIC language for the Altair, which this technique didn’t use.

At the recent Vintage Computer Festival East, Bill Degnan showed off an evolved version of Dompier’s original concept that he calls “Altair Jukebox” (on this page you can also find a PDF version of Steve Dompier’s 1975 article). Even 43 years after the discovery that the Altair could perform such a feat, it delighted everyone who stopped by the table. With the LEDs flickering away as the songs came strong and clear through the nearby vintage AM radio, the whole thing seemed almost magical. It’s no wonder Bill Gates was impressed.

Naturally, more than a few people wanted to know exactly how the music was being generated. For awhile Bill even had the top off of the Altair so you could see inside; akin to the magician pulling up his sleeves so you can see he wasn’t hiding anything. No, there was no little AM radio transmitter hidden inside the Altair, the effect is simply the product of carefully generated electromagnetic interference (EMI). In truth, it’s due more to a design flaw in the Altair than anything else.

Inadequate EMI shielding in the computer allows a nearby radio to pickup the switching noise of the electronics, causing considerable interference in the low AM frequencies when it’s in operation. Similar effects have been observed with other computers of the era, such as the PDP-8. You can pickup the interference regardless of what program is running on the Altair, it’s just that most programs will generate unstructured noise. But with skillful manipulation of this effect, it’s possible to create something that’s actually quite pleasant sounding.

As it so happens, this is almost precisely the mechanism which has recently allowed the use of cheap USB VGA adapters as software defined transmitters. The interference generated by the device, normally nothing more than an annoyance, is expertly honed to become a useful transmission. Seems like the best tricks never get old.

Bill took the original research published in Dr. Dobb’s and created a much more polished experience. Rather than having to toggle in data for each song you want to hear on the front panel, the user now has access to a menu which allows them to select from pre-defined pieces stored in the program. The upshot of all this is that anyone could sit down at the table and call up a song without any knowledge of the software or even the Altair itself necessarily.

As an added bonus, Bill had set up an absolutely mint TRS-80 Model 102 as the terminal for the day’s demonstration. Which served as both an excellent example of the incredible battery life the Model 100/102 could achieve with nothing but AA batteries, and a chance for attendees to get hands on time with something different in a sea of green and orange CRT terminals.

The dichotomy between the Altair with its brazen LEDs flickering away madly and the overtly 1980’s Model 102 definitely stood out on the show floor, and it seemed the chair in front of the Tandy was rarely empty. Based solely on the number of times one could hear it launch into the Star Wars theme during the course of the show, it’s safe to say this demonstration was a huge hit today. Just as it was all those years ago at the Homebrew Computer Club.