The personal computers in science fiction books, movies, and games are way cooler than the dinky pieces of hardware we’re stuck with in the real world. Granted the modern laptop has a bit more style than the beige boxes of yesteryear, but they still aren’t half as l33t as the custom PowerBooks in Hackers. Luckily for those who dream of jacking into the Matrix, the average hacker now has access to the technology required to make a custom computer to whatever fanciful specifications they wish. 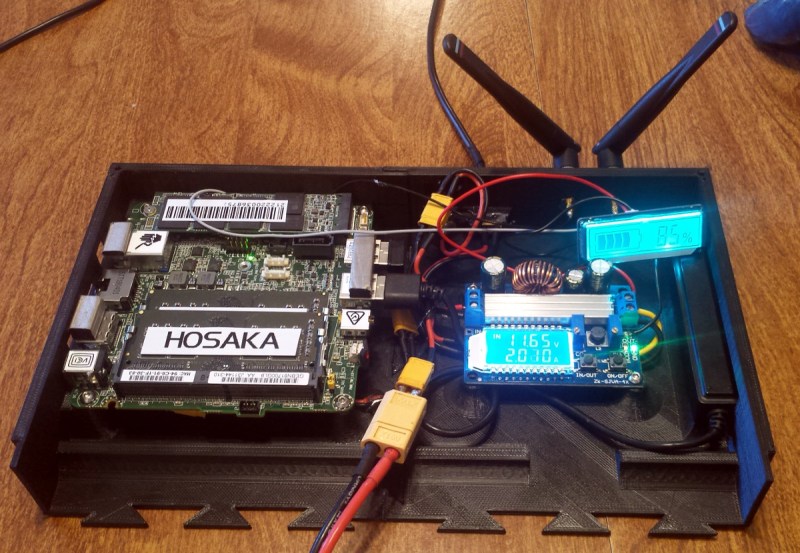 A perfect example is this “cyberdeck” created by [Tinfoil_Haberdashery]. Inspired by William Gibson’s Neuromancer, this wild-looking machine is more than just a cosplay prop or conversation piece. It packs in enough power to be a daily-driver computer, as well as some special features which make it well suited for field work.

The body of the cyberdeck is 3D printed, but as [Tinfoil_Haberdashery] doesn’t have a 3D printer big enough to do the whole thing in one piece he had to break it up into subsections. He added a dovetail pattern to the edges of each piece, which makes for much stronger joint than simply gluing it together. A worthwhile tip if you ever find yourself in need of printing something really big.

Raspberry Pi aficionados might be disappointed to see the Intel NUC motherboard inside; which features a 3.4 Ghz dual-core CPU, 8 GB of RAM, and a roomy 500 GB SSD in an incredibly small package. To keep everything running the machine can take up to twelve 18650 cells, giving it a maximum run-time of sixteen hours or so. There’s even a 12 V power jack so he can power a soldering iron and other low voltage gadgets off of the deck’s batteries in a pinch. The integrated charger can take anywhere from 6 to 30 V, which gives [Tinfoil_Haberdashery] the ability to charge up from a wide array of sources. 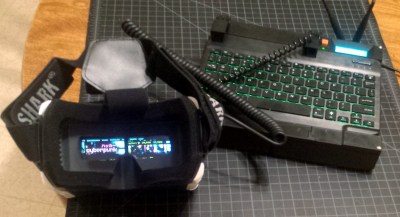 But perhaps the best feature of the cyberdeck is the display. It uses a Fat Shark Transformer, a five inch 720p display designed for FPV drone use, which can not only fold flat against the deck for storage, but can be removed and slipped into a pair of goggles. This gives the cyberdeck a head mounted display that looks like something straight out of the movies. It even supports 3D, if you’re willing to cut the resolution in half.

Things have come a long way in the world of DIY head mounted computer displays. Really makes you wonder what the dedicated hacker is going to be able to pull off in another 10 years or so.

21 thoughts on “A Mobile Computer To Make William Gibson Jealous”