I really love the design of the Nullify Badge for numerous reasons. At face value, the shape of the badge is so pleasing — it’s reminiscent of a padlock. The top of the PCB provides the perfect purchase for a lanyard, and the lark’s head knot used for the red paracord is a great aesthetic addition to the design. The four digits on the face are 12-segment displays (two modules, each with two characters) used to display “snarky things”.

The choice of a single AA battery is a superb one. In a year where the official badge hung like a weight around your neck because of four AA batteries, I would love to see a trend where light-weight becomes a core design aspiration. A total of 50 of these badges were made. They are driven by a PIC16F and include an IR sensor but I don’t remember the particulars of how these interact but I’m sure you can learn this and much more on the official badge page.

Hackaday Alum Sarah Petkus has been on a long quest to build an awesome robot with a lot of personality lovingly known as Noodle (check out her Hackaday Supercon talk on the adorable quadruped). For DC26 she decided to throw a con inside the con for Noodle and this is the badge.

Anyone following Sarah’s work knows that her art is on point and here is a great example. Look at the solder mask on front and rear and you’ll notice the  lettering is mirrored. This gives it the appearance that this is a design you can see through the board. The bold use of patches of silk screen and gold-plated copper deliver her aesthetic boldly and make you just want to stare at the design. There is a little squiggle through the C on the front that is a superb touch! Driven by an ATmega328 and a CR2032, there are 10 LEDs on the back that flash for a backlight effect. 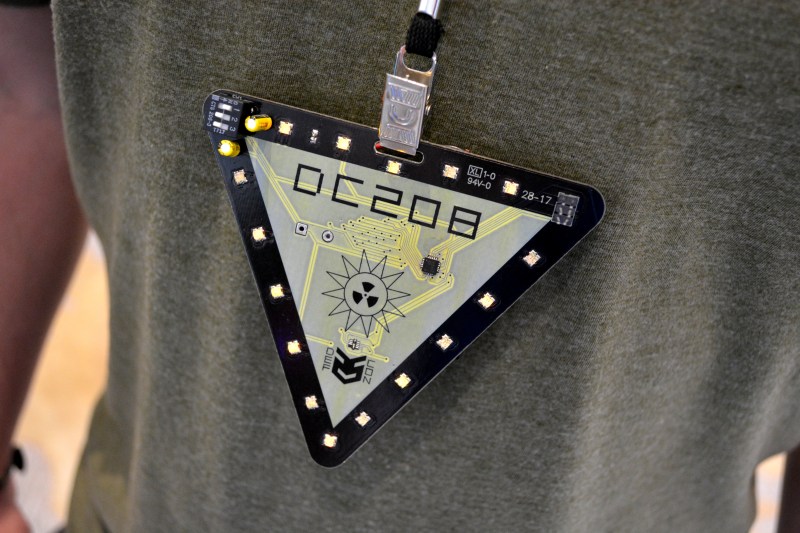 The DC208 badge from last year is known as the Geiger Badge. This one seems to be missing its piezo speaker for the ticking. The design is up on GitHub if you want to dig in.

Hardline connection on the bottom

I’m still kicking myself for missing CypherCon 3.0 which is held in Milwaukee, about 90 minutes from where I live. As the name suggests, the con centers around cryptography and puzzles. The con is organized by @Goetzman with badges designed by @Tymkrs (who created the official DEF CON 26 badge).

The Badge itself is styled to look and act as a telephone. For the con, they imported a 96 line PBX phone system new from China and set it up as the object to be hacked. A couple of the cube badges form the previous year were installed in the switching system, and a jtagulator was a dialable extension. The goal was to dial into it, hack the system to remove some physical barriers, and get to a new extension that had previously been unreachable. Luckily there’s a reddit thread discussing some of the details. You will also want to check out the webpage devoted to CypherCon badges.

The Tymkrs also had the CypherCon 2.0 cube badge on hand. It’s great to see it in person, and you can learn a bunch more from the coverage Brian Benchoff did last year. 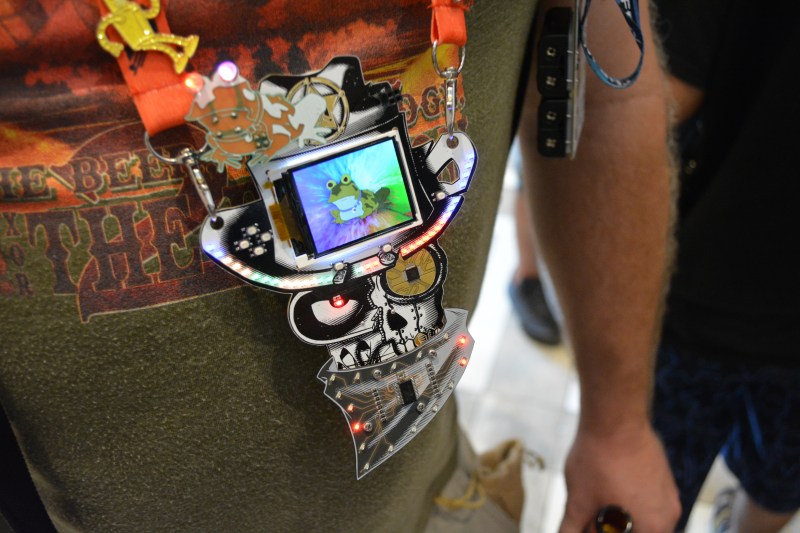 We’ve already done an in-depth review of the AND!XOR badge prior to the con this year. Go take a look because they’re really setting the pace for what a motivated group of badgemakers can do to evolve their offering from year to year.

It’s worth taking a look at some of the things that didn’t make it into that article. I had mentioned a set of four mysterious mounting holes and you can see above that there is indeed an add-on for the bottom of the badge. Shown is the bandanna add-on that has red LEDs playing a chase pattern. I also saw a cigar add-on as well.

The team has a loyal following who have gotten into the game making things that go along with the Futurama theme. Here you can see the Baby Bender badge built by @sqearlsalazar. There are also bejeweled pins of Bender doing his iconic dance that were produced by fans of the badge. Pins and challenge coins are a long-held tradition of DEF CON. We may need to try scare up more coverage of those in the future.

The DCZIA badge this year is just crazy! It’s a mechanical keyboard with 16 keys. The key caps are translucent which allows them to be backlit and this is where it gets wild. Look at the image of the back of the badge. What do you think those LED modules are?

If you said standard WS2812 modules being misused, you are correct! They’re mounted upside down in cutouts for the board. No big deal, right? You can just hack that at your bench! Sure, but these were actually assembled by a contract manufacturer… have fun explaining the assembly process. The badges were sold with the ESP32 and all the SMD parts populated, but the through-hole components were kitted up for you to solder yourself.

The Monero Badge has an insanely tight matrix of RGB LEDS and it looks spectacular. The image above gives you an idea of how clean the display looks in person. This video is a little bit washed out from the sheer brightness of the animations, but you get an idea of how stunning this badge really is when playing animations.

It was developed by @elasticninja and @tonym128 who set out to build 155 of them. Not surprisingly the displays were difficult to manufacture and required some rework to get to the 125 working boards they had going when I ran into them. I believe the non-working units were distributed to enterprising hackers who felt they could fix their own.

With 576 APA102 LEDs the power draw must be enormous, and indeed the first power supply actually lit on fire during testing. The supply was redesigned several times and landed on this version which is supplied by two Lithium 18650 cells. An STM32F4 drives the board with input from an accelerometer and gyro.

A Pair of Flux Capacitor Badges

I came across not one, but two Flux Capacitor badges! The ENIG on the first makes a great reflective background for the capacitor enclosure with black solder mask and white silk screen for the animated bits. To round it out the bare FR4 is a really good choice!

The second offering has an ESP8266 at its center with RGB LEDs for the animation. The cutouts in the PCB frame are a great touch for added interest.

No PCB? No Problem. This badge is a hunk of acrylic with holes drilled for through-hole LEDs. Circuit construction is both simple and clever. The leads have been bent flat on the back of the board and copper tape used as a power bus connecting to the coin cell holder.

The CoinOp Badge is my own creation based on my favorite arcade game, Galaga. I made 59 of these boards by hand in my basement (time lapse video is posted on the project page). It’s powered by a CR2032 coin cell which plays into the badge name nicely. An ATmega48 drives 18 red LEDs and 3 blue LEDs to complement the colors found on the ship in the game. There are two buttons which let you fire the lasers, cycle visualizations, and put the badge to sleep.

The Solder Skills Village was new to DEF CON this year. Hackaday and Tindie had the pleasure of being part of the SMD Challenge that was held in the village — a contest run in eight heats of six hackers trying to solder increasingly small surface mount packages by hand  (more on that in a subsequent article). This badge seems to be a spontaneous creation that was given as a trophy — not for winning the challenge, but for dropping the most parts on the ground. It’s a hunk of carpet with tiny parts embedded in it. Brilliant idea, flawless execution, I love this one-of-a-kind badge and if I were the recipient I’d wear it to every con!

There were more than a few hardware offerings that weren’t badges in the strictest sense, but isn’t it great to see people wearing custom hardware around? Here we have the #HackThePack which is @last_person’s open invitation for people to hack his WiFi gear mounted on a backpack frame.

For the blinky hat I didn’t get any information about it or the person who created it. I ran across him at the Queercon Pool Party and of course I love to see the Jolly Wrencher along with some really great LED fins!

This one is a wicked awesome use of PCB. Unfortunately I didn’t get images of Red’s cockroach badge in action, but the design is well worth a mention. Having spiny legs coming off of this huge (at least 14-inches long) board is a recipe for broken appendages so he used the overly long antennae which parallel the body of the roach on either side to stabilize the legs. Frankly it’s shocking you can get this many intricate cutouts on a board, but I suppose why not?

That’s it? I kid, of course. This was an amazing year of badges and it’s been a blast to try to cover as many as possible. Congratulations to all of the badge makers, your creativity and spirit has built an entire community and added a new layer of interest to DEF CON and beyond.

We hope to see you all at the Hackaday Superconference wearing your badges. Anyone building a badge just for Supercon this year? I know Hackaday is!