Getting young kids excited about technology and engineering can be a challenge, and getting them interested in the environment isn’t exactly a walk in the park either. So any project that can get them simultaneously engaged in both is a considerable achievement, especially when they can do the work themselves and see how creating something can have a positive impact on their little corner of the world. 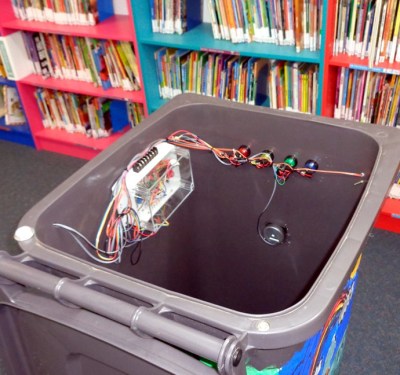 [Robert Hart] writes in to tell us about a project that challenged elementary school students to help make sure their peers put trash in its place. The kids came up with some predictably imaginative ideas like a robot to chase down litterers, but as us grown up hackers know all too well, budget and practicality often end up dictating the project’s final form. In the end, they came up with a talking trash can that gives words of encouragement to passerby.

The heart of the system is an Adafruit Audio FX sound board, which has been loaded up with audio clips recorded by the students. The buttons on the front of the can trigger different messages about why it’s important to make sure trash is disposed of properly, and an internal switch allows the can to thank the user for their deposit when the lid has been opened.

A PIR sensor on the front of the can detects when somebody gets close, and plays a message reminding them to make use of the trash cans provided on the playground. It’s not everyday that a child has a garbage can talk to them, so we think this is a fantastic idea for getting a kid’s attention. In keeping with the ecological friendly theme, the whole system is powered by a small solar panel which charges an internal 3.7V LiPo battery with the help of an Adafruit PowerBoost 500.

We’ve seen plenty of unusual projects here at Hackaday, but even for us, a talking garbage can is something of a rarity. Ironically though, we have seen a garbage can which can follow you around, so maybe the kids weren’t so far off with their original idea after all…

7 thoughts on “Talking Garbage Can Keeps Eye On Playground”