A Laser to Rival the Sun

At interstellar distances, it’s very difficult to discern a planet from the star it’s orbiting. This is why we’ve only been able to directly image a small number of exoplanets; the only reason we know they are there is by watching for dips in the light output of their host star. The same is of course true in reverse. An alien intelligence that has a telescope pointed towards our solar system is really just going to be looking at our sun. That means any laser we fire out into space with the intention of getting somebody’s attention would need to appear brighter than the sun, otherwise it would be like somebody on the Moon trying to get our attention with a flashlight. 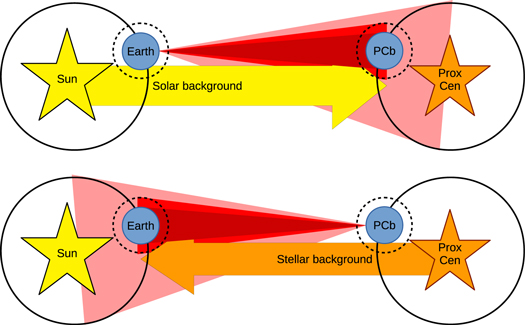 This would require a laser in the megawatt range that could be fired continuously or at least in bursts of several seconds. Admittedly it’s a pretty tall order, but not beyond our current level of technology. The US Air Force explored using an aircraft mounted megawatt laser as an anti-missile weapon in the mid-1990’s, which culminated with the development of the Boeing YAL-1. In 2010 the YAL-1 demonstrated it was possible to track and destroy ballistic missiles during their boost phase using its chemical oxygen iodine laser (COIL), though ultimately the project was canceled due to the tremendous costs involved in building and maintaining an operational fleet of the aircraft.

Regardless of its failings as a practical weapon, Clark and Cahoy cite the YAL-1 as proof that a similar laser could be constructed for interstellar communication. If the military can develop a megawatt laser that can fire for long enough to destroy a missile while still being small and light enough to mount in a modified 747, there’s no technical reason it couldn’t be done in an observatory on the ground.

As an added bonus, the COIL technology pioneered by the Air Force produces an infrared beam with a frequency of 1315 nm. This is particularly advantages for signaling purposes as our sun doesn’t produce much light at this wavelength, so the laser’s beam intermixed with light from the sun would be seen from a distant observer’s perspective as a star with a wildly fluctuating spectral output; an anomaly no alien astronomer could ignore.

Bringing it into Focus

As Clark and Cahoy explain, the megawatt class laser is only half the puzzle; it would still need similarly supersized optics to deliver the beam with the optimal divergence. But even here the hardware they have in mind, namely a 30 m to 45 m telescope, isn’t beyond our reach. The paper specifically mentions that the Thirty Meter Telescope Observatory (TMT) currently in the planning phases and scheduled to be operational by 2030 could provide adequate beam characteristics if it were paired with a 2 MW laser.

Somewhat counterintuitively, the paper argues that a tightly focused beam is not the ideal choice for flagging down our celestial neighbors. For one, such a beam would need to be aimed and tracked with exceptionally high accuracy to hit a target tens or even hundreds of light-years away. More importantly, our ability to detect distant planets is still too rough to produce models of their orbits with sufficient accuracy; we simply don’t know where to aim the laser.

The solution is a beam that has a large enough divergence to compensate for our poor aim. In fact, Clark and Cahoy suggest a beam wide enough to illuminate large swath’s of a star system could be ideal in some scenarios. Multiple planets within a star’s habitable zone would be able to see our laser at the same time, greatly reducing the amount of repositioning we’d have to do on our end.

Of course, there’s still plenty of variables in play that make such an attempt a very literal shot in the dark. For instance we can fire our laser towards Gliese 667, where Kepler previously detected a planet within its habitable zone, but its possible that the organisms who reside on that planet are insectoids with no appreciable technology. So whether it’s a rerun of “I Love Lucy” or a blast of infrared light from across the cosmos, they aren’t likely to pay it much mind and we come away with no more knowledge of our place in the universe than we had before.

But paling in comparison to technological or logistical hurdles is the most obvious problem: the economics of such a system. If even the United States Air Force didn’t think it was cost effective to continue operating a megawatt laser that proved it could destroy incoming ballistic missiles, who would possibly pick up the tab for an even more powerful and elaborate long-shot that arguably has no practical function other than to placate our yearning for exploration? Missions to the Moon or Mars can be argued to have practical benefits to mankind that offset their multi-billion dollar price tags, but shining a monstrous laser into the eyes of alien creatures that may or may not even exist for nearly the same price is a much tougher sell.

In the end, James R. Clark and Kerri Cahoy make a compelling and well-reasoned argument for interstellar laser communications. That the idea could work, and that it’s within humanity’s capabilities to bring such a system online within the next few decades is difficult to refute. But like so many great ideas, it seems unlikely it will ever see the light of day without the sort of concerted global effort that to date we’ve been largely unable to muster.