Imagine if you bought a new car but they keys were not going to be shipped to you until a few years later. That’s analogous to the situation the U.S. Air Force finds itself in. The first GPS III satellite is finally ready to launch today, December 18, 2018 — a little over 2 years beyond the original schedule. However, most of the unique GPS III features won’t be available until at least 2022, according to a 2017 Government Accounting Office (GAO) report to Congress.

GPS III is a project to launch 32 new satellites that will — for military users — be more difficult to jam. For civilian users, the new GPS satellites will be compatible with other systems, including the EU’s Galileo system. But the big draw? About three times the accuracy of the current system. For civilian use, that means 3 to 10 feet under good conditions as opposed to the current systems’ 10- to 33-foot resolution.

Coming Not So Soon

The real delay is not the satellites themselves, but a new ground control system. For now, only a few of the military benefits and none of the civilian benefits will be available until about 2022 or 2023. The ground station project, called the Operational Control System (OCX), is now 4 years behind schedule and is projected to come in at $2.5 billion dollars over budget. The Defense Department is blaming the need to address cybersecurity issues as driving at least some of the overrun. There is one hopeful point: the main contractor, Raytheon, claims they are on track to deliver in 2021, beating the GAO estimates.

Even the enhanced military performance will come at a price: They’ve decided to upgrade the existing control center and develop refit kits for a number of military systems so that they can use the new satellite before OCX comes online.

Putting these stop-gap measures in place is a good idea since the current satellites are running out of time. Recent projections have given the satellite fleet more time than previously thought, but by June of 2021 — according to current estimates — they will need replacing. So on the one hand, it is understandable that they want to get the satellites in orbit. However, as the GAO notes, greater coordination could have saved quite a bit of money by not requiring interim mitigation steps. 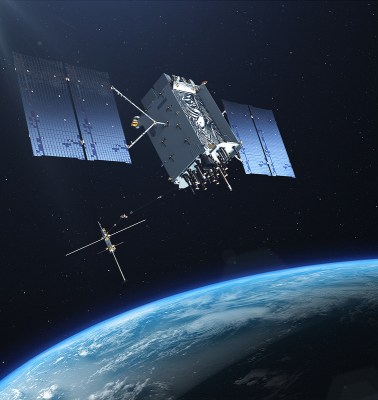 Of course, a government project overrunning isn’t really all that surprising. You can find a lot of good ideas about how to incentivize companies to make realistic estimates. However, there’s one thing we’ve noticed that always seems odd. Think about when we went to the moon. In 1962 when Kennedy made his “We choose to go to the moon!” speech, there wasn’t a single program to build and launch an Apollo capsule. We took a “crawl, walk, run” approach, starting small and building towards the ultimate goal.

That doesn’t seem to happen much anymore. We just jump right to the end game, which is great if you can do it. But it does lead to massive cost and schedule overruns and much higher development risk. In this case, an entire system upon which millions of people rely is being upgraded, with a few key choke points that are causing the current pain. Still, you would think you could have the ground station ready before you launch the satellite, or — at least — close to the same time.

Of course, from the corporate profit side, it makes more sense. Imagine if you are paid to repave a 20 mile stretch of highway. Would you tear up just a mile at a time? If you did and after 10 miles you were overbudget someone might say, “Well, let’s stop here and do the remaining 10 next year.” But if your first task is to tear up the entire 20 miles, they are going to have to keep paying you to fix it, even in the face of overruns. These replacement satellites are backward compatible but in order to utilize all of the new features we need “20 miles of road” in the form of the OCX ground station.

If you need a brush up on how GPS works, check out Richard Baguley’s primer on the Global Positioning System. Then again, GPS isn’t the only game in town anymore. In addition to the EU, several other governments operate similar systems, including GLONASS from Russia.