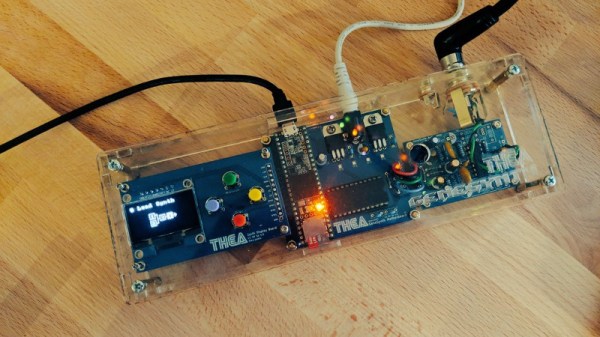 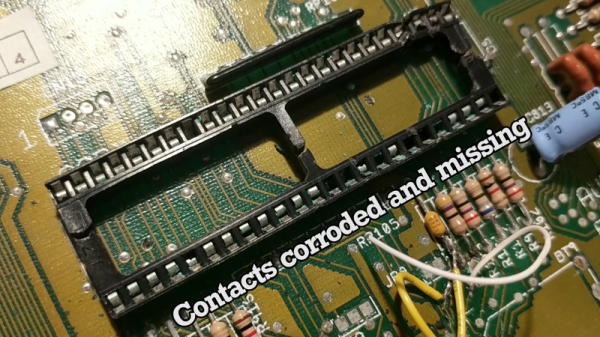 Recently, I was lucky enough to receive a big haul of retro computer gear from a friend who was emptying out his garage. Even better, the haul was almost entirely old Amiga gear — my favorite computing platform of all time. Upon returning home, I gleefully sorted through the boxes, powering things up one by one. Amazingly, everything worked… except for one lonely Amiga 500+. I was greeted by a dull grey screen. This wouldn’t do, so naturally, I got to work.

It seemed like a shame to be opening the machine, as after almost 30 years of life, this one still had its warranty seal intact. Regardless, nothing ventured, nothing gained – the Torx bits were at hand and the screws were coming out.

END_OF_DOCUMENT_TOKEN_TO_BE_REPLACED 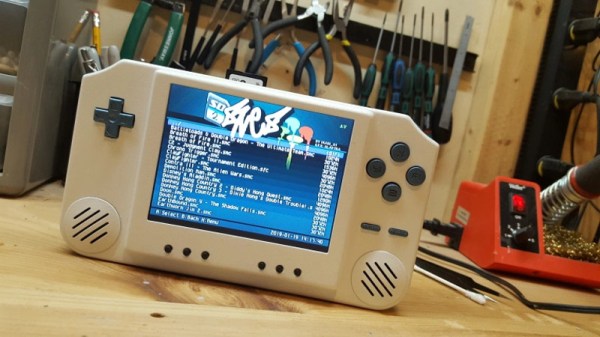 Handheld consoles have to make a lot of design choices that their TV connected brethren don’t have to worry about. Battery life is important, as is screen visibility, and the games can’t be too bulky or unwieldy if you’re going to be carrying them around all day. [Chris] is no stranger to building handheld versions of home consoles, and took a few of these lessons on board in his latest portable SNES build.

The motherboard was provided by a SNES Jr., a lightweight, compact model released towards the end of the console’s reign. This was small enough that it required no trimming, however [Chris] elected to replace the inefficient 7805 with a more modern switching regulator. The case was 3D printed on a typical FDM setup, while the buttons were produced on a Form 2 for better dimensional accuracy and surface finish.

The real party piece, however, is the use of an SD2SNES flash cart. This allows a huge variety of ROMs to be loaded onto a single SD card, and played on the original console hardware. This is particularly useful in a portable build, as it becomes possible to carry all the games you could want, rather than having to juggle several full-sized SNES cartridges. The SD2SNES is wired in place permanently inside the console, with an impressive number of patch wires between the motherboard and the cartridge PCB. Despite the long lead length, [Chris] reports no issues with the connection.

There are some limitations – the flash cart doesn’t work properly for games using extra chips on the cartridge, like the SuperFX in Star Fox, for example. Despite this, it’s an excellent, high quality build that we’re sure is a lot of fun to play out and about.

We’ve seen [Chris]’s work before – this portable N64 is a particularly nice example. Video after the break.

END_OF_DOCUMENT_TOKEN_TO_BE_REPLACED 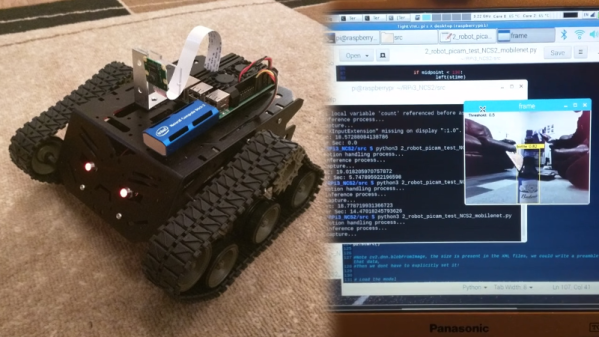 Robots, as we currently understand them, tend to run on electricity. Only in the fantastical world of Futurama do robots seek out alcohol as both a source of fuel and recreation. That is, until [Les Wright] and his beer seeking robot came along. (YouTube, video after the break.)

A Raspberry Pi 3 provides the brains, with an Intel Neural Compute stick plugged in as an accelerator for neural network tasks. This hardware, combined with the OpenCV image detection software, enable the tracked robot to identify objects and track their position accordingly.

That a beer bottle was chosen is merely an amusing aside – the software can readily identify many different object categories. [Les] has also implemented a search feature, in which the robot will scan the room until a target bottle is identified. The required software and scripts are available on GitHub for your perusal.

Over the past few years, we’ve seen an explosion in accelerator hardware for deep learning and neural network computation. This is, of course, particularly useful for robotics applications where a link to cloud services isn’t practical. We look forward to seeing further development in this field – particularly once the robots are able to open the fridge, identify the beer, and deliver it to the couch in one fell swoop. The future will be glorious!