What if I told you that you can get rid of your headphones and still listen to music privately, just by shooting lasers at your ears?

The trick here is something called the photoacoustic effect. When certain materials absorb light — or any electromagnetic radiation — that is either pulsed or modulated in intensity, the material will give off a sound. Sometimes not much of a sound, but a sound. This effect is useful for spectroscopy, biomedical imaging, and the study of photosynthesis. MIT researchers are using this effect to beam sound directly into people’s ears. It could lead to devices that deliver an audio message to specific people with no hardware on the receiving end. But for now, ditching those AirPods for LaserPods remains science fiction.

There are a few mechanisms that explain the photoacoustic effect, but the simple explanation is the energy causes localized heating and cooling, the material microscopically expands and contracts, and that causes pressure changes in the sample and the surrounding air. Saying pressure waves in air is just a fancy way of explaining sound.

Demonstrating a Proof of Concept 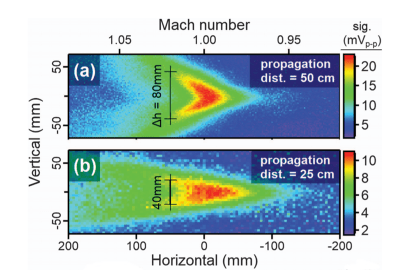 In the case of the MIT project, a 1.9 μm thulium laser produces a beam tuned to water vapor at power levels that are not harmful to your eyes. The water vapor around your ears — and there is almost always some — absorbs the laser and generates sound. The team used both a modulated beam and a pulsed beam. In the pulsed beam case, the laser actually sweeps across your ear at the desired audio frequency.

Each method has advantages and disadvantages. Modulated light creates a higher fidelity sound. However, the sweeping technique produces louder sound and only creates the correct frequency at a certain distance from the laser. The team thinks that could be used to target specific people. Presumably, people nearby might still hear sounds, but at the wrong frequencies.

So far, this is more or less a lab demonstration. They’ve projected sound about 2.5 meters away of sufficient volume to hear with just your ear. We are guessing there are a host of practical problems to overcome to make this a workable system. Just targeting a specific person’s ear is probably nontrivial.

Nearly As Old as the Phone

Turns out the photoacoustic effect was known as early as 1880 while Alexander Graham Bell was working on his photophone which used sunlight to transmit speech. That device had a receiver that used a light sensor, but he noticed that he could produce sound waves just by hitting a solid object with pulsed sunlight and the frequency depended on the type of material. This eventually led to the spectrophone. However, with the crude sensors and light sources available, it was never really practical. Today, though, it is used for a variety of medical and biological tests.

This isn’t the first time I’ve written about MIT’s photoacoustic work. They’ve used it for spectroscopy that can detect gasses at a distance. Of course, if you are willing to allow a receiver, sending audio with a laser isn’t hard at all.

Honestly, we were a little surprised at how simple this looks and we wondered why we haven’t seen any homebrew projects that use this effect for something. Sure, a good spectroscope probably requires a tunable laser, but it would be interesting to see what kind of hobby-level projects could use gas and a laser to create sound. If you build something, be sure to tell us about it.

21 thoughts on “Those Voices In Your Head Might Be Lasers”