The Nvidia Jetson is something we’ve seen before, first in 2015 as the Jetson TX1 and again in 2017 as the Jetson TX2. Both of these modules were designed as a platform for ‘AI at the edge’, an idea that’s full of buzzwords, but does make sense from an embedded development standpoint. The idea behind this ‘edge’ is to build and train all your models on racks of GPU, then bring that model over to a small computer for the inference. This small computer doesn’t need to be connected to the Internet, and the power budget doesn’t need to be huge.

This ‘AI at the edge’ paradigm isn’t new — we had dedicated AI chips in the 1980s, even if the Internet of Things hadn’t been invented yet — and Google recently released Coral, a board loaded up with an Edge TPU platform and custom ASIC that has the same form factor and power budget as a Raspberry Pi. Intel has a Neural Compute Stick that’s designed to plug into a single board computer. Again, this is proof, rendered in silicon, we are in the second AI renaissance. The Jetson Nano is the latest board that fits into this market, and its main features are its portability and as a module that can go into your product.

Here are the Nvidia spec sheets published along with this launch: 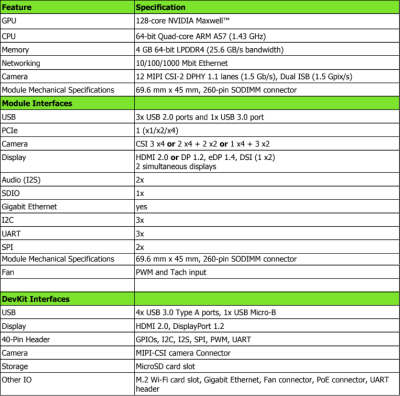 The Jetson Nano comes with a quad-core ARM A57 CPU running at 1.4GHz, and since this is Nvidia, you’ve also got a Maxwell GPU with 128 CUDA cores. Memory is 4 GB of LPDDR4, there is support for Ethernet and MIPI CSI cameras.

These specs put the Jetson Nano in a class a bit above the Raspberry Pi 3, which is to be expected because it costs more. The review unit I was sent runs a standard Ubuntu desktop at a peppy pace, and with Internet this is a computer that performs as you would expect.

But the Jetson isn’t designed to run a GameCube emulator, even though it probably could (and someone should). The entire point of the Jetson Nano is to do inference. You train your model on a big computer, or use one of the many models available for free, and you run them on the Jetson. Here, the Jetson Nano is vastly more capable than the Google / Coral dev board recently launched, or a Pi with an Intel compute stick. You also have a CUDA GPU, and support for, ‘all the popular frameworks’ of deep learning software.

A Robot, For The Makers

With the release of the Jetson Nano, Nvidia is focusing on the maker market, whatever that may be, and they’re releasing tutorials, examples, documentation, and the killer app of all single board computers, a 3D printed robot. The bill of materials for the Jetbot includes a 3D printed robot chassis, a Raspberry Pi camera, a WiFi card (an Intel Wireless-AC 8265), gear motors, a motor driver, and a 10000 mAh USB power bank. Add in a few screws, and you have a functioning Linux 3D printed robot. 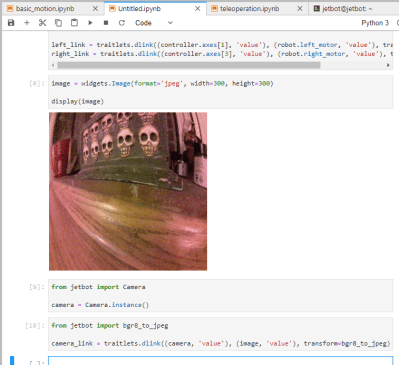 Writing code for the Jetbot first requires connecting it to the local WiFi network, but after that it’s as simple as pointing Chrome to an IP address and opening up a Jupyter notepad. All the code in the examples is in Python, and in minutes, a kid can can drive a car around with an Xbox controller, with live video coming back to the browser. This is what robotics education is.

The tutorials and examples for the Jetson Nano include basic teleoperation, continuing to collision avoidance by training a neural net to object following. This is a setup that gives you a capable machine learning platform and a two-wheeled robot chassis. Can you use this to solve a Rubik’s cube? Yes, if you build the software. You can build a self-driving car, and it gets kids interested in STEM.

There’s a learned lesson at work here. Providing examples that can get users up and running fast was the missing element that doomed Intel’s Maker Movement efforts, and it is the key to the success of the Raspberry Pi and Arduino. If you don’t produce documentation and examples, the product will fail. Here, Nvidia has done a remarkable job bringing a GPU on a small Linux module to educators and students.

The Future of the Jetson Platform

This is not Nvidia’s first Jetson product. In 2015, Nvidia released the Jetson TX1, a credit-card sized brick of a module that was intended to be the future of AI ‘at the edge’. Despite the buzzwords, this is a viable use-case for very fast embedded processors; you can train your model on all the GPUs Amazon owns, then put your model on a small embedded device. It’s AI without the cloud or a connection to the Internet. The Jetson TX2 followed in 2017, again with a credit card-sized brick of a module attached to a MiniITX motherboard. This was the module you wanted for selfie-snapping drones, or machine learning for a self-driving car.

The Nvidia Jetson Nano is a break from previous form factors. The Nano, like the Raspberry Pi Compute Module, fits entirely on a standard laptop SO-DIMM connector. This is a module designed for the same application as the Pi Compute Module; you need to build a carrier board that handles all your I/O, and this tiny little module will handle all your data. It’s a viable engineering strategy, even if it’s not for people who want to stuff modern electronics in an old Game Boy shell and run emulators. People do real work with electronics, you know.

While the Jetson Nano is the first in its form factor, there are some hints that Nvidia is going to be developing this platform over the long term. One of the biggest engineering constraints on a project at this scale is the power budget, and the Jetson Nano ships with a carrier board that includes a micro USB power input (there is an additional barrel jack adapter, rated at 5V, 4A). This micro USB power input is limited to 5V, 2A, or 10 Watts. There’s only so much computing you can do per Watt, and if you want more, you have two options: use a smaller process for your silicon or use more power. Nvidia has come up with an ingenious way to save some engineering time on the next version of their carrier board. They’re stacking footprints for USB connectors. The carrier board also supports a USB-C connector:

Sure, it’s just a tiny detail that would go unnoticed by most, but the carrier board is already designed for a USB-C connector and the increased power that can deliver. Nvidia is clearly planning for a future with the Jetson, and with a significantly more convenient form factor we might just see it.