It’s not that storage boxes and organizers are hard to find. No, the problem this project set out to solve was more nuanced than that. The real trouble [theguymasamato] had was that his storage options — wide shelves and deep drawers — weren’t well suited to storing a lot of small and light objects. The result was a lot of wasted space and poor organization. To make matters worse, his big drawers had oddball dimensions, meaning that store bought organizers weren’t a good fit either. 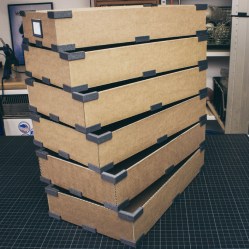 To solve these problems, [theguymasamato] decided to design his own stackable boxes to store small and light objects far more efficiently than before. The design also allows the boxes to be made in a variety of sizes without changing any of the 3D printed parts. Carefully measured and cut cardboard is critical, but that’s nothing a utility knife and ruler can’t solve. The only other requirements are a few simple plastic parts, and some glue. He can fit six of these inside a single one of his drawers with enough room to access and handle them, but without wasting space.

Cardboard is really versatile stuff. Not only has it been behind some amazingly complex devices such as this tiny working plotter, but we’ve seen it form major components in the remarkably ambitious cardboard CNC.