Many of us are happy to spend hours cooking up a solution that saves us seconds, if success means never having to do a hated task again. [frankensteinhadason] molds enough silicone parts that he grew tired of all the manual labor involved, so he built a silicone injector to do it for him. Now, all he has to do is push the handle in notch by notch, until silicone starts oozing from the vent holes in the mold. 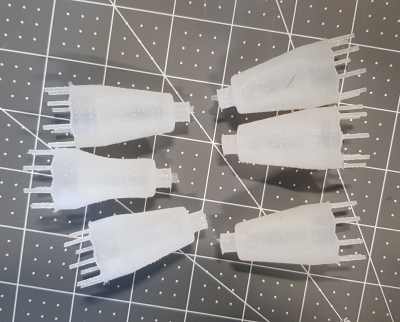 The mold pictured above is designed to make little shrouds for helicopter communications connections like this one. His friends in the industry like them so much that he decided to sell them, and needed to scale up production as a result. Now he can make six at once.

He designed brackets to hold a pair of syringes side by side against a backplane. There’s a lever that pushes both plungers simultaneously, and adapters that keep the tubing secured to the syringe nozzles. Ejected two-part silicone travels down to a double-barrel mixing nozzle, which extrudes silicone into the top of the mold.

Naturally, we were going to suggest automating the lever operation, but [frankensteinhadason] is already scheming to do that with steppers and an Arduino. Right now he’s working on increasing the hose diameter for faster flow, which will mean changes to the adapter. Once that is sorted, he plans to post the STLs and a video of it pumping silicone.

Ever thought about doing the reverse, and using silicone to mold hot plastic? Yeah, that’s a thing.