When listening to music you sometimes cannot avoid the situation where other people get annoyed because they feel it disrupts their important doings or they do not share your taste in avant-garde doom metal. Of course one could just use headphones. But a hackier way would be to build a parametric speaker that focuses soundwaves into a narrow beam like [Shane] did with this ultrasonic sound gun. 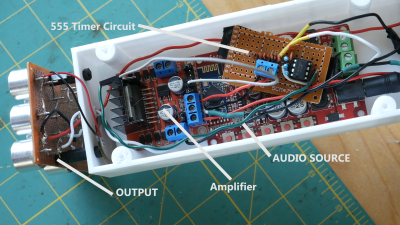 As the directivity of a soundwave depends on the size of the source and its frequency, a directed beam can practically only be achieved with ultrasound. Even though we are not able to perceive frequencies above ~20 kHz, the nonlinear properties of air make it possible to hear the audio modulated onto an ultrasonic carrier signal. For his sound gun [Shane] was inspired by another parametric speaker project. It took him some time to get the 555 timer circuit oscillating at the right frequency and he fried a cheap Bluetooth audio module while trying to increase the output volume but in the end, he managed to get everything working. As the project name suggests, he also 3D printed a gun-shaped enclosure. The video below shows that the sound from the gun behaves really similar to a beam of light and can, for example, be bounced off other objects.

If you are looking for other inspiration there is a whole list of cool ultrasonic projects from distance sensors to acoustic levitation.