You Got MOXIE, Kid

We’ve been keenly interested in the Mars 2020 mission in general, with a special interest in the engineering behind its mobile astrobiology and geology laboratory, Perseverance. In addition to deep-dives into the Adaptive Sample Caching system that will seal up Martian regolith samples for an eventual sample return mission, and Ingenuity, the first aircraft designed to operate off-world, we profiled the Perseverance rover, which will carry all this gear around the Red Planet. The amount of science this rover is slated to perform could very well change our perception of Mars, and may well turn up the first definitive evidence of extraterrestrial life.

To accomplish these missions, Perseverance includes a number of sophisticated instruments, two of which sport most of the 3D-printed parts included on the mission. The Planetary Instrument for X-ray Lithochemistry or PIXL, is designed to search deep inside Martian rocks for signs of fossil life. The Mars Oxygen In-Situ Resource Utilization Experiment, or MOXIE, is intended to test technologies for producing unlimited amounts of oxygen from the Martian atmosphere, in support of refueling rockets for the return trip to Earth. Both instruments contain parts made with advanced metal 3D-printing techniques, both in-house at JPL’s Additive Manufacturing Center, and externally at vendors contracted for special jobs.

In addition to more typical polymer printers, which are mainly used for prototyping and printing fixtures and jigs, JPL’s in-house additive lab has a wide range of technologies available for printing metal parts. Which modality is used depends very much upon where the part is going to be used. JPL also has arrangements with outside additive manufacturing vendors to print the pieces they can’t do in-house.

For non-flight parts, the JPL team uses mostly directed-energy deposition, possibly the coolest-sounding 3D-printing modality there is. DED depends on a high-energy beam, either laser or an electron beam, into which powdered metal or a fine wire is fed. The energy creates a pool of molten metal that is applied to the growing print. DED is somewhat like spray arc welding or laser cladding, with the addition of CNC control of the print head and an inert environment to reduce oxidation of the growing print. DED has the advantages of relatively fast build rates and the ability to create fine features, as well as minimal need for post-processing steps like additional machining or pressing (more on which below).

Another advantage of DED is that prints can be created with gradient alloys. JPL’s DED printer is an RPM 222XR, which supports up to four different metals in a single print. This is similar to an FDM printer that can support multiple filaments and print different colors or different materials within a single print, but even better since it can do what is known as gradient alloys, where a metal part is created from multiple powders, with different areas of the part having different metallurgical properties. For example, on Curiosity, the steel shaft of an actuator was causing problems with a magnetic encoder. By printing just the magnetically sensitive portion of the shaft from non-magnetic stainless steel, they were able to avoid the issue.

Parts that are destined to fly on JPL-built spacecraft are not printed on the in-house DED machines, though. Rather, JPL turns to powder-bed fusion printers for their flight-qualified parts. There’s an alphabet soup’s worth of initialisms for powder-bed printing processes, including selective laser sintering (SLM), selective laser melting (SLM), and direct metal laser sintering (DMLS). The video below shows DMLS on an EOS M290, one of the three DMLS machines the JPL Additive Manufacturing Center runs.

Of all the hobbyist-grade polymer printing methods that we’ve all become accustomed to, powder-bed fusion methods are perhaps most closely related to resin printing by stereolithography, or SLA. Where SLA prints use light to polymerize photosensitive resin, though, powder-bed fusion printers use a high-energy beam to sinter or melt the granules at the surface of a thin bed of powdered material to form each layer of the print. The beam can either be a powerful fiber laser or an electron beam; JPL can do laser prints in-house but contracts with a vendor when a part needs to be electron-beam printed.

Regardless of which energy source is used, there’s a lot of engineering that goes into controlling the powder bed of these printers, since print quality is directly related to the depth of the powder. When a layer is complete, the build platform moves down into a reservoir by the programmed layer height. More powdered metal is then added to the tiny space on top of the receding bed surface by a complex squeegee mechanism that ensures that a completely homogeneous layer of fresh powder is laid down upon which the next layer can be built. The print builds up a layer at a time until it’s finally dug out of the loose powder, cleared of any supporting structures, and readied for post-processing.

Hot isostatic pressing, or HIP, is a process that has long been used by the powdered-metal industry to finish parts made by, for example, die pressing or metal injection molding, and more recently for metal additive manufacturing. Parts created with any of these techniques necessarily have voids within them; no matter how fine the powder grains used to create the part, gases are still trapped within its structure. HIP aims to literally squeeze those bubbles away, using a combination of extreme heat — up to 2,000°C — and extreme pressure of perhaps 100 MPa or more, using an inert gas like argon.

Parts subjected to HIP treating experience considerable shrinkage as the parts are compacted. This has to be accounted for at design time, but HIP has the decided advantage over regular hot pressing because it applies pressure evenly to the part, shrinking it predictably in all dimensions. This tends to avoid the dimensional distortions that traditional pressing using solid anvils introduces into parts.

Another consideration in additive manufacturing of metal parts for spaceflight is the “foundry in a box” problem. For traditional subtractive manufacturing, the starting material is a block of metal that has already been through a foundry process. The metal has either been cast, extruded or perhaps forged, has been heat-treated and tempered, and has known properties with regard to strength, ductility, and hardness. It may even have been X-rayed to reveal any hidden imperfections. Its crystal structure is more or less fixed, and all that’s left to do to it is to remove the unnecessary bits to expose the part hidden within.

For additive manufacturing, though, the metal part that results is not as well-characterized. Where the crystal structure of the starting material in subtractive manufacturing is pretty much set, the energetic means needed to accomplish metal 3D-printing by definition change the microscopic structure of the starting material. Hence the “foundry in a box” — the metal in a 3D-printed part was literally made de novo. For flight-qualified parts, where potentially billions of dollars are on the line, engineers need to account for the chaotic, energetic regimes that 3D-printed parts experienced, however briefly, during their fiery birth. That adds a layer of uncertainty, but for the flexibility offered by additive manufacturing, it’s just another cost of doing business.

I asked about the analysis that goes into deciding whether a part is made by traditional subtractive techniques or additive methods. Going into it, I assumed that cost would be the prime driver. NASA and JPL have made much lately of lowering the cost of space exploration, and their budgets have consistently reflected the need to do big, important things for as little as possible. And so when you look at a part that, when made using subtractive methods, turns 90% of the block of starting stock into chips, additive methods seem to make a lot of sense. After all, if a part can be made using a volume of stock material that’s pretty much exactly the volume of the finished part, the cost savings would be considerable.

It turns out I was wrong about that. With parts destined for flight, cost is hardly ever considered as a driver for moving to additive manufacturing. Additive is generally viewed more as an enabling technology, and is used to create parts that can’t be created any other way. The aforementioned gradient alloy encoder shaft is a perfect example — blending metallurgical properties within a single part is difficult to accomplish with anything but additive manufacturing. Another example of parts that are not feasible with anything but additive are parts where mass must be kept to a minimum, or parts which will go into an assembly with specific cooling needs and need to have built-in cooling channels. Such parts would be difficult to create subtractively, but are much more easily 3D-printed. 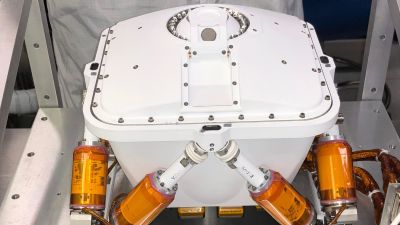 Another area where additive shines is in the re-creation of legacy parts. We’ve all heard the stories about how we could never build a new version of the mighty F1 engines from the Apollo program, mainly because of the loss of the expertise and tooling that went into building them. While it’s unlikely that the massively complex engines will ever be built again, additive manufacturing is often used to recreate parts that are no longer available. While JPL doesn’t do much of this — they are in the business of building the future, after all — other entities like the US Air Force, which needs to keep airplanes that rolled off the assembly line over 60 years ago alive, often need to. They’ll regularly scan parts, often going so far as to use a CT scanner, and print parts made by long-defunct vendors by decades-retired machinists to keep their fleets flying.

For as flexible and powerful as additive manufacturing is in aerospace applications, you’d think that the industry would be flocking to it en masse. And while they are to some degree, in a lot of ways it’s a very conservative industry that wisely looks at radical change with skepticism. But as additive manufacturing continues to make parts possible that were once impossible, and as JPL keeps racking up successful missions using these previously impossible parts, it’ll prove itself and solidify its place as a manufacturing method of choice for all kinds of missions.