The Tap Trapper certainly looks high-tech, at least for the time. Despite the simplistic controls, you can’t help but imagine that there must be some electronic wizardry lurking inside the case. The design is reminiscent of an Atari 2600 that has been shrunk down along its width, complete with the decorative ridges that were so popular on electronic devices of the era. 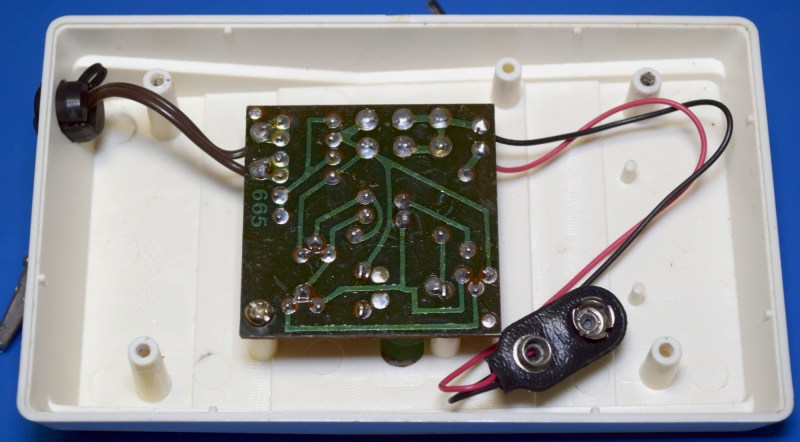 Unfortunately, once the case is open it’s clear we’ve been had. The enclosure is almost entirely empty, and even with a 9 V alkaline battery installed, its probably twice as large as it needs to be. Obviously the manufacturers wanted the Tap Trapper to have a certain air of sophistication and complexity, and thought that a smaller unit simply wouldn’t do. I’m almost surprised there aren’t any weights embedded into the case to make it feel heavier. 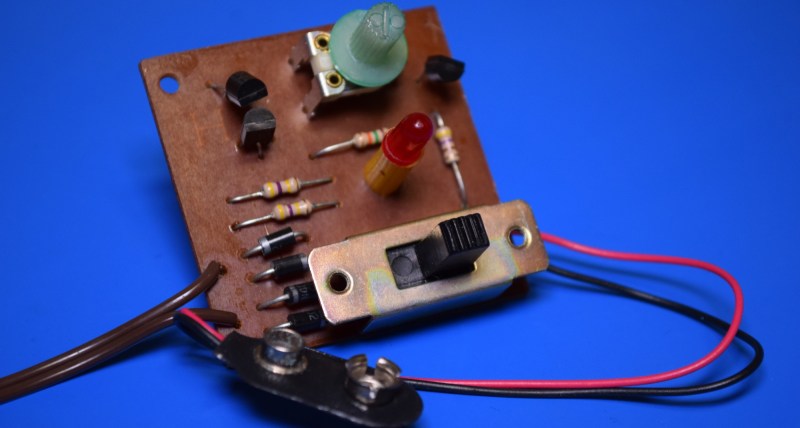 For the optimists in the audience, I’m sorry to say that a close look at the PCB only makes matters worse. There’s no technical magic going on here. In fact, this device is only a few steps above a breadboard project. I suspect if you looked hard enough, you could probably find a Forrest M. Mims III diagram out there that’s not far off from what the Tap Trapper is packing.

Keeping an Ear Out

It’s really pretty incredible just how little is on this board. We’ve got three transistors, an LED, a handful of resistors, and what appears to be a simple diode rectifier. So how does that tell you if somebody is listening in on all your juicy gossip? It’s just a matter of understanding the different voltages present in the standard North American phone line.

For starters, the rectifier is presumably there to block the 90 VAC signal that comes down the line whenever the phone rings. Beyond that, the line voltage should be sitting at around 48 VDC when all the phones are on the hook. Once a device actually connects to the line, such as when a handset is picked up, that voltage will drop down to below 9 VDC. Each additional device added to the line adds a bit more resistance, which naturally causes the voltage to dip even lower.

Knowing this, and seeing the circuit used in the Tap Trapper, we can surmise that what we essentially have here is an adjustable low-voltage indicator light. The user calibrates the circuit to the peculiarities of their home phone wiring by adjusting the potentiometer until the LED just turns off when their primary phone is off the hook. If the LED lights up while you’re using that phone, it means the line voltage has dropped further, and that there’s an excellent chance somebody’s listening in.

A Product Out of Time

So what can we learn from the Tap Trapper? Well, not a whole lot really. This is the kind of circuit that you probably could have found in an old issue of 2600 or Phrack, dusted off and plopped into an ill-fitting injection molded enclosure. In that respect, it’s not entirely unlike the Recon Sentinel we looked at last month: bog standard hardware tossed in a funky looking enclosure with just enough whiz-bang advertising copy on the box to convince the user that what they’ve purchased is greater than the sum of its parts.

In the increasingly unlikely event you’re still using POTS, then the Tap Trapper will still do what it says on the tin. Otherwise, if you see one of these gadgets languishing in a pile of e-waste, you should probably just leave it there.