We just got our hands on some engineering pre-samples of the ESP32-C3 chip and modules, and there’s a lot to like about this chip. The question is what should you compare this to; is it more an ESP32 or an ESP8266? The new “C3” variant has a single 160 MHz RISC-V core that out-performs the ESP8266, and at the same time includes most of the peripheral set of an ESP32. While RAM often ends up scarce on an ESP8266 with around 40 kB or so, the ESP32-C3 sports 400 kB of RAM, and manages to keep it all running while burning less power. Like the ESP32, it has Bluetooth LE 5.0 in addition to WiFi.

Espressif’s website says multiple times that it’s going to be “cost-effective”, which is secret code for cheap. Rumors are that there will be eight-pin ESP-O1 modules hitting the streets priced as low as $1. We usually require more pins, but if medium-sized ESP32-C3 modules are priced near the ESP8266-12-style modules, we can’t see any reason to buy the latter; for us it will literally be an ESP8266 killer.

On the other hand, it lacks the dual cores of the ESP32, and simply doesn’t have as many GPIO pins. If you’re a die-hard ESP32 abuser, you’ll doubtless find some features missing, like the ultra-low-power coprocessor or the DACs. But it does share a lot of the ESP32 standouts: the LEDC (PWM) peripheral and the unique parallel I2S come to mind. Moreover, it shares the ESP-IDF framework with the ESP32, so despite running on an entirely different CPU architecture, a lot of code will run without change on both chips just by tweaking the build environment with a one-liner.

If you were confused by the chip’s name, like we were, a week or so playing with the new chip will make it all clear. The ESP32-C3 is a lot more like a reduced version of the ESP32 than it is like an improvement over the ESP8266, even though it’s probably destined to play the latter role in our projects. If you count in the new ESP32-S3 that brings in USB, the ESP32 family is bigger than just one chip. Although it does seem odd to lump the RISC-V and Tensilica CPUs together, at the end of the day it’s the peripherals more than the CPUs that differentiate microcontrollers, and on that front the C3 is firmly in the ESP32 family.

Our takeaway: the ESP32-C3 is going to replace the ESP8266 in our projects, but it won’t replace the ESP32 which simply has more of everything when we need it. The shared codebase and peripheral architecture makes it easier to switch between the two when we don’t need the full-blown ESP32. In that spirit, we welcome the newcomer to the family.

But naturally, we’ve got a lot more to say about it. Specifically, we were interested in exactly what the RISC-V core brought to the table, and ran the module through power and speed comparisons with the ESP32 and ESP8266 — and it beats them both by a small margin in our benchmarks. We’ve also become a lot closer friends with the ESP-IDF SDK that all of the ESP32 family chips use, and love how far it has come in the last year or so. It’s not as newbie-friendly as ESP-Arduino, for sure, but it’s a ton more powerful, and we’re totally happy to leave the ESP8266 SDK behind us.

The ESP32-C3 shares the coding framework with the ESP32, some of the peripherals, and has about the same amount of memory. What’s different? The RISC-V CPU of the C3 vs. the Tensilica cores in the ESP32 and the ESP8266. So we thought we’d put them through their paces and see how they stack up in terms of processing speed and overall power use. 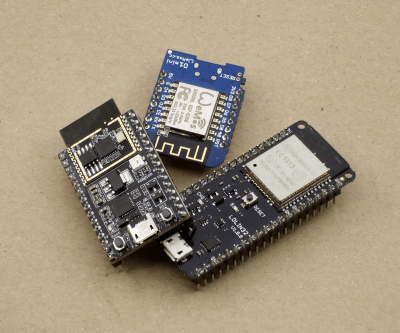 In terms of standard benchmarks for microcontrollers and other embedded devices, CoreMark is probably the go-to. And we found that it had been already ported to the ESP8266 and ESP32 by [Ochrin]. (Thanks!) CoreMark includes three tests: finding and sorting with linked lists to tax the memory units, running a state machine to test switch/case branching speed, and a matrix multiplication task to tax the CPU and compiler.

In practice, and mimicking our general experience with the ESP8266 and ESP32 frameworks, the code compiled without any hassle for the ESP32 and ESP32-C3. In contrast, getting it running on the ESP8266 was a hair-pulling few hours spent degrading versions of the RTOS framework, installing modules in Python 2 inside virtualenvs, and getting the set of PATHs and other environment variables just right. But we weren’t going to leave you without a proper comparo, so we burned the midnight oil.

The takeaway is that a single RISC-V core on the ESP32-C3 is marginally faster per MHz than a single core on either of the Tensilica-based devices. Of course, if you’re crunching numbers hard and using both cores of the ESP32, it’s in another league, and you know who you are. But if you’re running Arduino on the ESP32 and you’re not explicitly running the RTOS tasks yourself, or running MicroPython and not using threads, you’re probably running a single core on the ESP32 anyway. Modulo some small difference in having a free core to exclusively handle WiFi, you might not be much worse off with the C3. 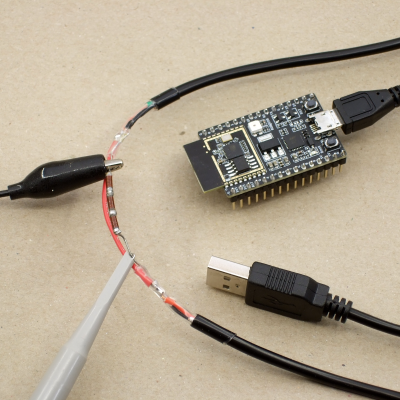 While running this test, we also hooked up our super-sophisticated power measuring unit to the devices under test, a USB cable with three 3 Ω resistors and an oscilloscope. Of course, if you simply wanted the chip’s power specs, you could hit up the datasheet.

Instead, here we’re looking at the real-life performance of three different modules: the WeMos D1 mini for the ESP8266, the Lolin 32 for the ESP32, and our demo ESP32-C3-DevKitC-1, straight from Espressif. All were running with LEDs off, or clipped summarily with side-cutters in the case of the ESP32-C3 unit. (It didn’t make all that much difference, but you don’t know until you try.)

With power consumption data, we could also check out the modules’ power efficiency, measured in CoreMark score per milliwatt. Here, the ESP32-C3 does a bit better than the ESP8266, and somewhere between the ESP32 running one core and two cores respectively. This confirms what we’ve suspected for a while — if you want to save power, your best bet is to keep the chip sleeping as much as possible, and then run it full-out when it needs to run. If you’re doing that with an ESP32, use both cores.

And while our results are definitely significant and repeatable in terms of power and speed, they’re not game-changing. If we really needed to crush floats, we’d go for a chip that’s better suited for the task like an STM32F4xx or STM32F7xx, or those brutal NXP/Freescale 600 MHz i.MX ARM7 chips in the Teensy 4.0. If you’re buying an ESP-anything, it’s because you want the wireless connectivity, and it’s good to know that you’re not giving anything away with the ESP32-C3 on the CPU speed.

We hinted at it in the introduction, but the RISC-V nature of this chip, at least in terms of user experience, is no big deal. You code, compile, and flash just the same as you would with any other toolchain. The ESP-IDF makes using the new chip as easy as typing idf.py set-target esp32c3 and maybe idf.py fullclean for good measure. Then you go about your business. I must have swapped architectures 30 times in the course of this testing, and it’s literally that simple.

Of Peripherals and Pins

The first limitation you run into with an ESP8266 is that it doesn’t have enough GPIOs, or ADCs, for your particular project. While the ESP32 is a serious improvement in sheer GPIO quantity, once you’ve taken account of the pins with dedicated functions, or that are only input, you can end up pushing the limits of the chip easily. So you design in an external ADC chip and connect it via I2C, or you tack on a shift register and drive it with the blindingly fast I2S peripheral — something you can’t do with the ESP8266.

Sharing the peripheral set with the ESP32 will help alleviates some of these woes on the ESP32-C3, even though it has the same number of pins as the ESP8266. Heck, if you’re willing to allocate them, the C3 even has JTAG capabilities. And while the JTAG isn’t, a lot of the hardware peripherals are assignable to whichever pins you wish.

But we have to conclude that designing with the ESP32-C3 is still going to be a lot like designing for the ESP8266. I/O is limited. You’ll have to work with that.

The ESP8266 started life as a simple AT-command-set WiFi modem, and a bunch of hackers proved that it had a lot more to offer. It’s sometimes hard to remember how difficult and expensive WiFi connectivity was before the ESP8266, but at the time, WiFi for $5 was revolutionary compared to WiFi for $50 – $100. Flash forward a few years, and the ESP32 is a competent microcontroller in its own right, with some cool quirky features. Oh yeah, and WiFi and BLE. We’ve come a long way in a very short time. 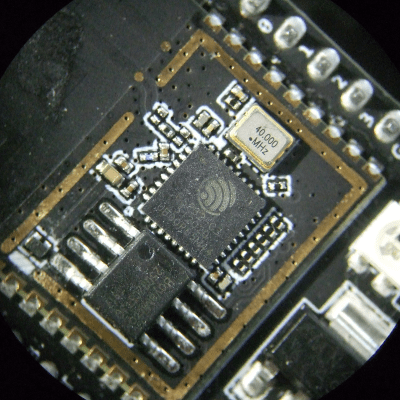 The C3 is really a blend of the two: a limited number of GPIO pins like the ESP8266, but with nice peripherals like the ESP32. If it’s priced to compete with the ESP8266, it will push that chip into retirement. But maybe it’s time.

The ESP-IDF has grown on us, but it’s still nothing compared to the overabundance of examples for ESP-Arduino or the incredible ease of use of MicroPython. When the latter gets ported over to the ESP32-C3, with its significantly expanded memory over the ESP8266, that’ll be a tremendously inexpensive platform that will make many forsake ever compiling again. But when you need the speed of the native SDK, it’s nice to be able to lean on the extant ESP32 codebase, so an ESP8266 in ESP32’s clothing is a winner.

We’ve got pre-production samples, and Espressif is still working on supporting all the features of the ESP32-C3 in the IDF. Heck, you can’t buy an ESP32-C3 module yet anyway, so we’re stuck looking into our crystal ball a little bit. But the murmurs about pricing similarly to the ESP8266 make us take notice, and it’s certainly a worthy upgrade even at a small price premium, if that’s what the market will bear. At the same time, the ESP32-C3 is fundamentally less capable than the ESP32, so it’s got to come in cheaper than that. With ESP8266 dev boards selling for $2 and ESP32 dev boards selling for $4, that doesn’t leave much wiggle room, and we suspect some folks will just pony up for the ESP32s. So it’s hard to say how much the price really matters anyway.

But it’s nice to see RISC-V cores in more devices, not least because the standardized instruction set architecture — which essentially amounts to a standard set of machine-language commands — makes writing optimizing compilers easier and faster. For the end user, it doesn’t matter all that much, but if saving money on IP licensing fees is what allows Espressif to include a more modern peripheral set for the ESP8266 price, then we’re all for it.