Hero was either Greek or Hellenized Egyptian. Most of his writings we know of are actually lecture notes for courses he taught at the Musaeum, the home of the Library of Alexandria. While some of the inventions credited to Hero may have existed already, he applied them with such great success that his name is bound to them as well as the devices and mathematics that he developed. 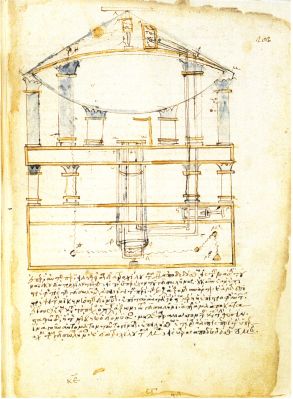 Given how long ago Hero lived, there is some uncertainly about the years he worked and much of his writing has been lost or diluted. Hero quoted Archimedes and was himself quoted by Pappus so that narrows the possible years down. However, Hero describes a lunar eclipse in great detail and this allowed Neugebauer to calculate that the observation occurred in 62 AD.

His most famous writing Pneumatica has many surviving copies, but the oldest is from the 13th century. Another text, Mechanica, is only known through an Arabic translation from around 865 AD.

The image to the right shows a page from Automata where a figurine dispenses wine and milk through a series of hidden pipes and tanks. However, Hero wasn’t just an inventor, he was also a mathematician. Most famously, he devised a formula for computing the area of a triangle, showed an iterative way to compute square roots, and articulated an important principle in optics.

Given how long ago Hero lived, it is hard to know if he was a genius or just someone good at adapting ideas from others. For many years, only the Pneumatica was known. It is a very practical description of machines and some of the material is from another source. Worse still, most of the machines were frivolous amusements or parlor magic. There were exceptions, such as a working pump for fire fighting, but most of the items were automated musical instruments, animated animal puppets, and other impractical devices. Apparently, the book is also poorly organized.

Because of this, many scholars dismissed Hero as a frivolous inventor. However, texts found later show that Hero was quite educated and worked with serious technology for his day. Perhaps the toys were examples, much as we might write a textbook today with software to flash an LED or play Tetris to teach students how to program.

Today it is generally accepted that Hero was an inventor ahead of his time. He understood how to harness wind, steam, and gravity. He also understood mechanical advantage and a variety of simple machines. He didn’t necessarily invent all of these, but in true engineering fashion, he did put them to good use.

The Automata, or Automatic Theater, describes two different automated puppet shows. One moved of its own accord and shows a temple in which a fire is lit on an altar. The god Dionysus pours out wine while figures dance about him to the sound of trumpets and drums.

Another puppet show was immobile but had doors that opened and closed to set off each scene. The performance tells the myth of Nauplius whose son was killed by Ajax. A ship is built and launched. The ship crosses the sea, passing leaping dolphins. Nauplius lights a false beacon to lead the crew astray and the ship is wrecked. Finally, Athena destroys Ajax with thunder and lightning. You can see a computer recreation of the device in the video below.

The puppet theaters used a heavy lead weight on a pile of grain that would escape slowly through a hole. The weight pulled a rope that would spin an axle. Almost all the machinery used strings and drums controlled by the axle. There were no springs or cogs, so it was a very simple machine with very complex effects. You can see a physical recreation of the moving theater that shows some of the working details in the video below.

The rope and pegs are reminiscent of pre-computer automation schemes using timing motors, cams, and microswitches.

One of Hero’s more famous inventions was a mechanical fountain. That doesn’t sound like much today, but with no electricity, pumping water is a big task. The fountain is a lesson in applied hydraulics. There are three vessels stacked one atop another and connected by pipes. The top basin is initially empty. The middle basin contains water and the bottom container holds air. The bottom two containers must be airtight. Water falling from the middle container to the bottom creates pressure that a pipe carries to the top of the middle container, forcing water up another pipe to the top container.

Confused? Grab some bottles and straws along with some common tools and watch the video below. At about 5:20, [Dave] explains the operation very clearly. While it might seem like the fountain will never stop, it does as soon as the water levels reach a certain point, so no ancient perpetual motion machine here. 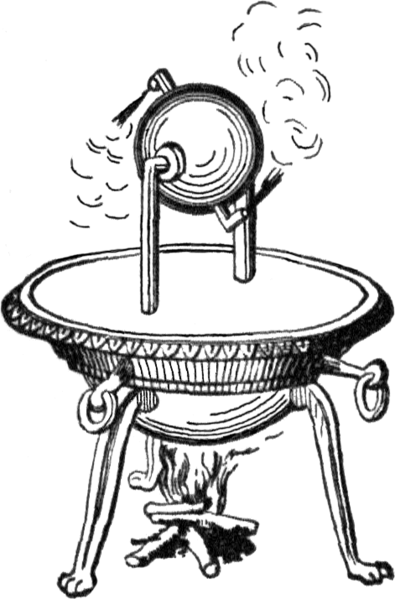 However, one of Hero’s most famous inventions is one he probably didn’t actually invent. The aeolipile was a crude form of steam engine. A vessel of water has two L-shaped jets pointing opposite directions. The vessel is free to rotate and a fire underneath boils the water. As steam comes out of the jets, the vessel will rotate.

You can make one of these easily out of a soda can, as demonstrated by Hackaday’s own Steven Dufresene on his RimstarOrg channel. It would probably work better if the can had proper jets, but it clearly works well enough.

Hero used these, although they had been written about earlier. However, he didn’t appear to use it for anything very practical. With his understanding of steam and hydraulics, he was very close to inventing a proper steam engine.

There were other inventions including one that used the weight of a coin to tip a basin of holy water. The tilt would eventually cause the coin to slide off stopping the flow of water. This could be the first coin-operated vending machine. While a wind-powered organ might have been a bit more practical than some of his inventions, it still wasn’t a revolutionary work-saving device. Some think it was, however, the first wind-powered machine.

It does seem odd that for all of Hero’s use of steam, wind, and gravity, there doesn’t appear to be much practical use of the technology until much later. Although the Chinese had windmills, for example, possibly as early as 400 AD, it would be the 9th century before Persians used a sort of horizontal windmill to grind grain and draw water. Imagine a Greek-led industrial revolution 2,000 years ago.

We have to wonder what technology we have under our noses today that we aren’t taking advantage of. Meanwhile, making replicas of Hero’s devices is great sport. We’ve seen engines using a lot more than soda cans.