Those of you with an interest in microcomputer history will know that there is a strong crossover between the path of electronic calculator evolution and the genesis of the integrated CPU. Intel’s 4000 was famously designed for a calculator, and for a while in the 1970s these mathematical helpers were seen as the wonder of the age. [Simon Boak]’s calculator is a curious throwback to that era, as it’s not a decimal calculator as we’d know it but a hexadecimal device that simply computes using the functions of the famous 74181 ALU chip. 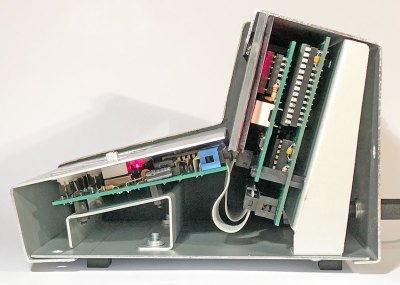 An ALU, or to give it its full name an Arithmetic Logic Unit, is a component of a CPU with two inputs and one output that can perform any of a range of binary functions upon the two inputs and return the result on the output. This calculator has two of them for eight bits of raw adding power, with a hexadecimal keypad for setting the inputs and a set of 7-segment displays for showing the results. It’s housed in an achingly retro folded sheet metal console case with wooden end pieces that would have graced any engineer’s desk with pride back in about 1975. We may not need one, but we really want one!

If the 74181 is a mystery to you then fear not, because chip master [Ken Shirriff] has produced some handy explanation work on its operation.

Thanks [Ted Yapo] for the tip.