It was a tight race, but the results of the Halloween Hackfest contest are in. We asked you to scare up a terrifying build in one of three categories, and as usual, you didn’t disappoint! These three hackers have each won a $150 shopping spree at Digi-Key to fund their future frights. 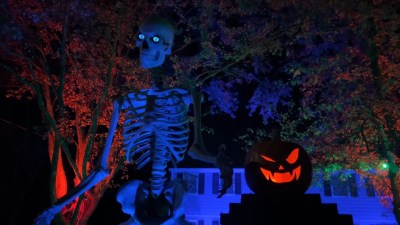 [Nelson] has been in the Halloween-based animatronics business for more than a decade, but always gets beaten to the punch when it comes to doing the really fun stuff like making things move and speak. Once [Nelson] got their hands on a 12-foot skeleton from the big box hardware store, it was time for the gloves to come off and the fun to begin.

The three axes of movement come from a rotation servo, a tilt servo, and a nod servo, all of which are connected to each other and the skeleton with 3D-printed supports. Lucky for us, [Nelson] documented this first build quite nicely and provided the 3D models, should you suddenly get the urge to go see if they have any of these magnificent skeletons left on clearance. 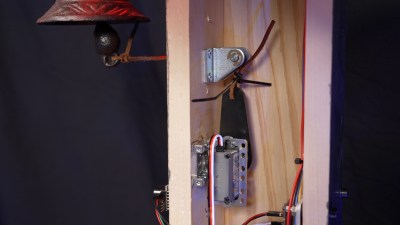 What’s scarier than the undead? How about people who were buried alive, whether accidentally or not. Can you imagine hanging around in a graveyard, innocently doing tombstone rubbings or some ritualistic sacrifice when suddenly you hear someone ringing a bell and/or a terrified, muddled voice screaming for help?

[Glen Atkins]’ Safety Coffin Grave Bell build forgoes the body part, but in the dark, it’s easy to let your imagination run wild. It looks like a bell on a post, but pass too close and the ultrasonic rangefinder detects unsuspecting trick-or-treaters and gives them a scare by frantically ringing the bell with a big servo hidden inside. We hope they brought spare underwear. 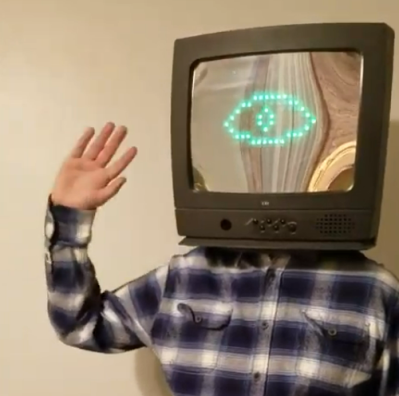 [Skye] won a lot of people over last year with their computer head costume that featured a lone blinking eye and a voice. What those people didn’t know was that it suffered from three big problems: it had poor ergonomics from a heavy monitor shell, the blinkenlights matrix used to display emotions was underutilized, and using a keyboard proved to be an inconvenient UI for running the voice. This year, [Skye] set out to fix all the problems and make the costume even more awesome and comfortable to wear.

The brain of this computer head costume is a Raspberry Pi 4. As for [Skye]’s actual head, it is safely enclosed inside a hard hat that’s epoxied to the inside of the case. A wide range of emotions dance across the 16×16 RGB LED matrix that looks great behind some mirrored film, and they go great with the new voice method — [Skye] speaks softly into a small microphone, and the Raspi uses Mozilla’s DeepSpeech to repeat whatever they say in a robotic British accent.

Congratulations to all the winners, and a big thank you to all 45 entrants for your hair-raising hacks. Thank you also to Adafruit and Digi-Key for sponsoring this contest. We hope you had a great Halloween!